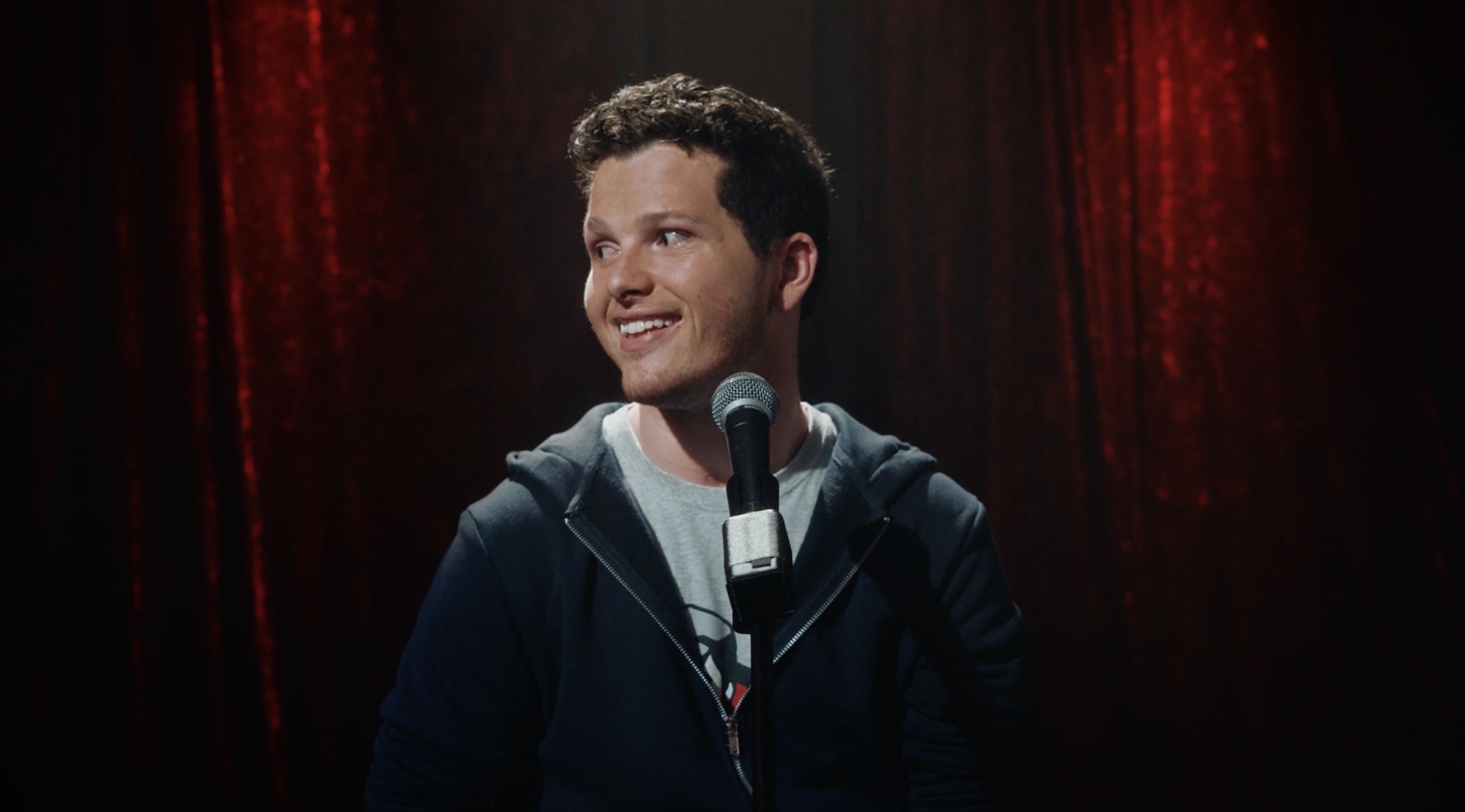 My aim with contextualising David Abramsky’s brilliant Dad Joke is to avoid spoiling it. It’s a film where the less you know going in, the better. All I’ll say, for now, is that it’s about a comedian, portrayed by Joshua Robertson, who delivers a stand-up routine on the night his son his born. A brilliantly tense and relentless 16 minutes of humour, happiness and fear. A fear which, as Abramsky says in this interview, “is Josh’s instrument, and he plays it like a virtuoso”. I caught up with Abramsky – after first raving about Dad Joke in our London Film Festival wrap-up article – to get in depth about the production process behind this one-shot comedy/drama.

Where did the idea for Dad Joke initially begin?

The idea for Dad Joke began the night I first saw Joshua Robertson do comedy. I was taken to a stand-up night by a friend where you don’t know in advance who’s performing. I’ll never forget the palpable sense of anxiety as Josh was helped onstage, and it slowly dawned on everyone that this next act was disabled. You could tell people were scared – what if this isn’t funny, should I laugh more, less? And as Josh’s set went on it became clear that that very fear is Josh’s instrument, and he plays it like a virtuoso. His favourite thing to do as a performer, and a person, is to fuck with people, and that’s my favourite thing to do as a Director, and a person, so I was excited to collaborate.

A comedian is sort of a perfect non-actor, because they have all the talent and charisma and instincts, but are also used to being completely in the moment.

The most exciting part, though, was when we started writing together a lot, which we mostly do in Josh’s living room. His family life is playing out all around us as we write, with his fiancee and in-laws chatting and his 2-year-old son stealing my iPhone to watch Peppa Pig, etc. So, those themes of fatherhood and career vs. family very naturally seeped into the final script.

Could you talk about the importance of the rehearsal process when creating Dad Joke with it being a one-shot film?

This was Josh’s first time acting on screen, and I felt a dual responsibility to make sure he felt prepared and confident but, at all costs, not to over-rehearse him to the point where he couldn’t bring his comedian’s spontaneity on the day. It’s great to direct non-actors because their decisions are instinctive and they can always surprise you. A comedian is sort of a perfect non-actor, because they have all the talent and charisma and instincts, but are also used to being completely in the moment.

Josh’s blocking is fairly simple since he’s static for a lot of it, so other than making sure he knew the words we mostly just talked about why his character was saying each thing he was saying – the trickiest bits were where I had to convince him not to be funny because his character wasn’t going for the laugh. It was the DoP Gerry Vasbenter and Grip Adam Zimmerman who really needed to nail the choreography and they did, without a huge amount of rehearsal, just because they’re incredibly good at what they do.

Similarly, how much time went into writing the screenplay for Dad Joke, did you leave space for working things out on the day?

A lot of time went into writing every version of this film other than Dad Joke and debating it first with each other, and then with the BFI once they’d put us in development. Some versions had a bank robbery and a 20-stone hairless naked man with a foot-wide umbilical cord hanging from his stomach portraying Josh’s son (I still have a soft spot for that draft). And once we’d written and discarded every other conceivable version of this story, writing Dad Joke honestly took very little time because all the shit we’d thrown in the bin made clear to us what we wanted to say and how it should feel and what that would look like. When I’m writing I try to think of it as ‘filling the bin’ – if you’re generating shit ideas and scripts that go in the bin, then you’re doing exactly what you should be, and you trust that something’s going to come down the pipeline at some point that belongs on the screen instead of in the bin.

I had seen Jim Cummings’ Thunder Road around that time and, as well as being a one-shot, I was just excited by the fact it avoided so many of the pitfalls of short filmmaking – excessive self-awareness, triteness, being too neat or too vague or too familiar. It felt like everything in it was there for a good reason, and it wasn’t trying to be anything other than what it needed to be. That inspired us to write the 1-shot version – also because I was pessimistically convinced BFI wouldn’t end up funding us and I wanted us to write a version we could potentially make without funding. Luckily, that version got us the funding.

By the time of the shoot, there wasn’t much space for changing words or lines. But again, as a comedian, Josh is able to make something he’s said a thousand times sound fresh and spontaneous, which makes my job a lot easier.

How important was the ending for you? Without spoiling anything, the film is so intense and gripping until those final moments.

The first draft of the one-shot didn’t have that ending. And that draft didn’t feel like our voice because it gave up on fucking with people at the final hurdle – I didn’t feel that was good enough. What’s important to me about it is it places the agency firmly with Josh. With disability-related stories, there’s always a temptation to fall back on people’s instinctive desire to pity and sympathise with Josh’s character, to be moved by his triumph over adversity, to let him off the hook. I wanted to encourage people to do that, dare them to do that. And then hold a mirror up to that desire to sympathise with someone who, arguably, neither needs nor deserves nor wants your sympathy.

A joke to me is the ultimate form of storytelling and I wanted the film to function like a comedian’s bit, with all the twists and turns.

I also wanted Josh’s character to be in control of the commodification of his own story. I think it also makes the events of the story seem more believable. In structural terms, it gives the film the same structure as a joke, which was also important to me. A joke to me is the ultimate form of storytelling and I wanted the film to function like a comedian’s bit, with all the twists and turns. But you can’t have a great bit without a strong, clear ending, a punchline, and without this ending, I don’t think the film would be what it’s supposed to be.

I’m curious to know what you hope audiences take away from Dad Joke and how they’ve responded to it? Have you had any memorable responses?

The most interesting responses to me are those that come from people’s personal experiences. An aspiring filmmaker, who goes to the same performing arts school for people with learning difficulties as my cousin, had a very moving response. He said that the film, and particularly the ending, excited him because it showed how much more is going on in a person’s life at any moment than their physical or learning ‘needs’. I’m also excited any time a parent says it resonated – I’m not a parent, so that was important to me. But ultimately I want the same thing we all want – laughter, tears and applause, and we’ve had a bit of all three which is great. 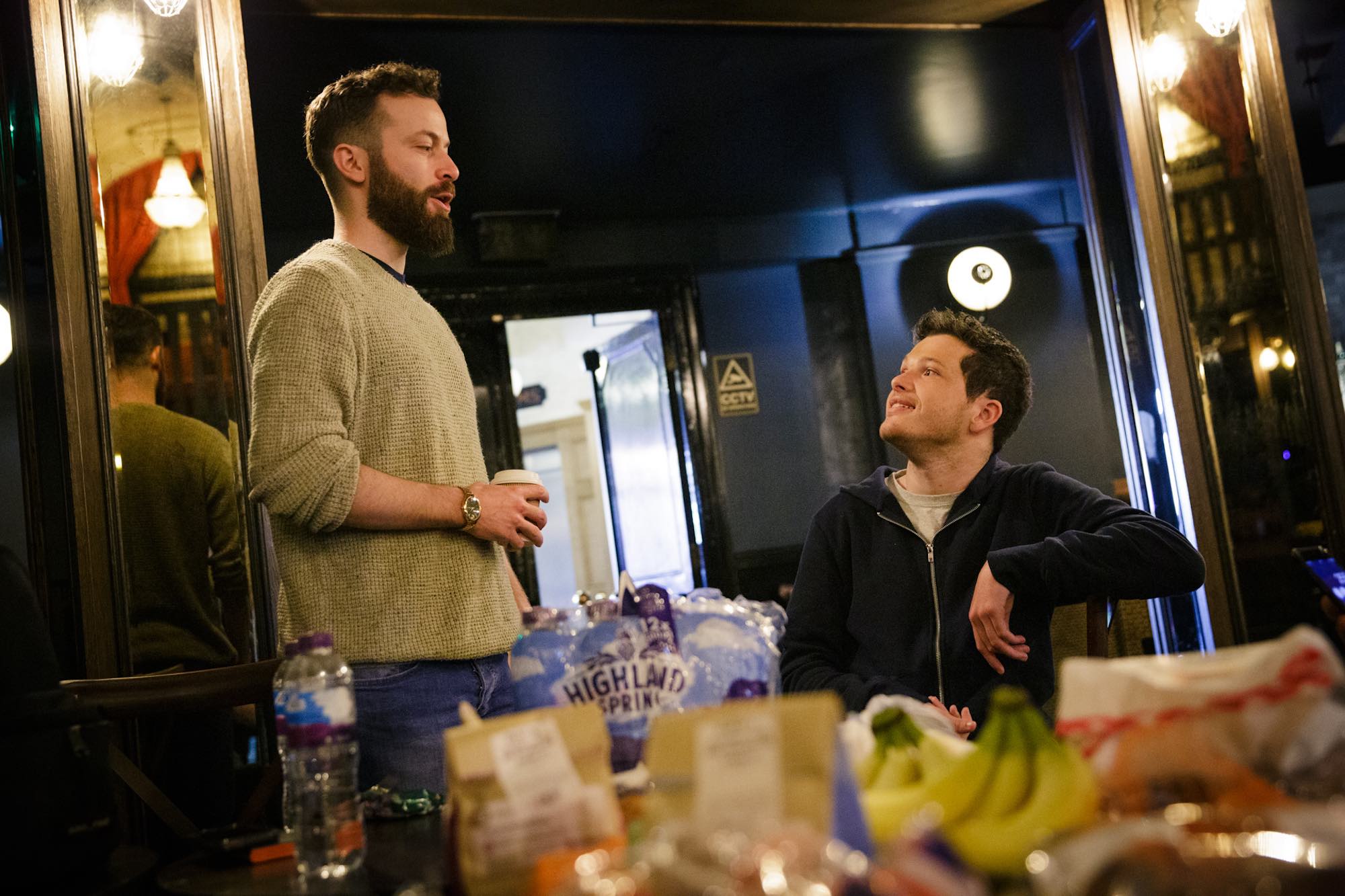 But actually the most memorable response was Josh and his fiancee Tori’s – they decided the story of the film was so good that they ended up conceiving another child shortly after we wrote it, whose due date (no word of a lie) was the day before our LFF premiere. Their daughter considerately came a week late and has already attended Aesthetica with us, where we were pitching the next project. We were practising our pitch and she spat up on my hand, which was also an interesting response I guess.

What do you hope to achieve in the future? Will you be pursuing more narrative shorts? Do you see yourself ever taking the leap to features?

Dad Joke’s the best thing I’ve made so far, so all I really want to do in the future is make something better than that, and then something better than that. Better is a bit arbitrary in art, but I want to push further, take bigger risks and chase more laughter and tears. I’ll certainly do a feature when the time is right, and I’m curious to see what it ends up being.

We’ve decided that Dad Joke’s next incarnation should be as a TV series rather than a feature, so we’ve started developing that. I’d like to start directing TV while we do that, to learn that medium inside and out. As a writing team we’re also going up for adaptation jobs, etc. which is a good way to keep honing our voice.