Showcasing her prolific productions skills whilst under global lockdown, Adi Halfin returns to DN with another music video for Israeli singer-songwriter Asaf Avidan – hot on the heels of their exquisite Earth Odyssey collaboration. In Lost Horse, Halfin documents a young couple and “the good, the bad and the ugly” that comes with being in a relationship. Created entirely within the restrictions of a local lockdown, Halfin talks us through the trials and tribulations of remote production and reveals the reason why she’s keen to return to a film set as soon as possible.

Was the idea for Lost Horse born out of trying to do something different to Earth Odyssey?

Earth Odyssey was done very impulsively. It was all about capturing a moment in time and releasing a quickly-made quarantine video to cheer people up during lockdown. Asaf and I were discussing Lost Horse before Covid-19, and we were planning to film the video in April. But naturally, that didn’t happen and immediately after Earth Odyssey was released, Asaf wanted to get back to Lost Horse.

Dancer-choreographer duo, and real-life couple, Bobbi Jene Smith and Or Schraiber were on board from the very beginning, so it was obvious we’d be collaborating again. But they’re based in the US and I’m in Berlin. I didn’t quite see how we can do a remote shoot. Earth Odyssey portrayed dancers in quarantine filming themselves, and the style of the video fit the concept perfectly. Here we wanted something different, but we were very limited in what we could do.

They would expose themselves quite openly and film constantly, capturing the good and the bad moments of their relationship.

We tried out a few things which were more narrative. Or and Bobbi sent me some shooting tests, but I realised it would be impossible to direct this way, especially since we didn’t have a professional crew and I couldn’t get a live feed of what was happening on set. So, then I came up with the idea of creating a dance documentary. The song portrays a deterioration of a relationship and since they’re a couple in real life, it made sense to me to have them film their daily life. It meant that they would expose themselves quite openly and film constantly, capturing the good and the bad moments of their relationship. Knowing Bobbi and Or, I knew they would deliver, so although it meant taking a risk, I was certain the result would be good.

How did you approach Bobbi and Or? Was there anything specific about relationships you asked them to film?

Once we established the concept, I sent them a list of potential moments I wanted them to film. The first thing we shot was Bobbi dancing under the lamp. They sent me a test take of her dance, which was beautiful, and then I asked for a few more takes, fine-tuning the emotions. Bobbi and I have a good understanding when it comes to expressing emotion in dance, so I knew that whatever she did would be beautiful and to the point.

I had a narrative based on the verses of the song and suggested scenes which I called ‘The Good, The Bad and The Ugly’. These were the three beats I wanted to portray; the beauty of falling in love, the struggles and difficulties of keeping it all together, and finally expressing pain through their final dance. I had a clear vision of transformation from morning to night, but in each situation, I wanted to see both sides of the relationship, and to show how it actually is small moments of pain and disappointment combined with beautiful gestures of love.

How long was the turnaround and how much footage did they send you?

The process took about two months. We had an overall of nine shooting days. Because of the nature of the project, we didn’t have full shooting days, and there were a lot of reshoots. The idea was that they film constantly and I was expecting a lot of footage but eventually, we realised we had to be very accurate in what we shot due to our limited post-production time. The concept was tricky and I’m happy that Asaf was on board since we didn’t know what the end result would look like. 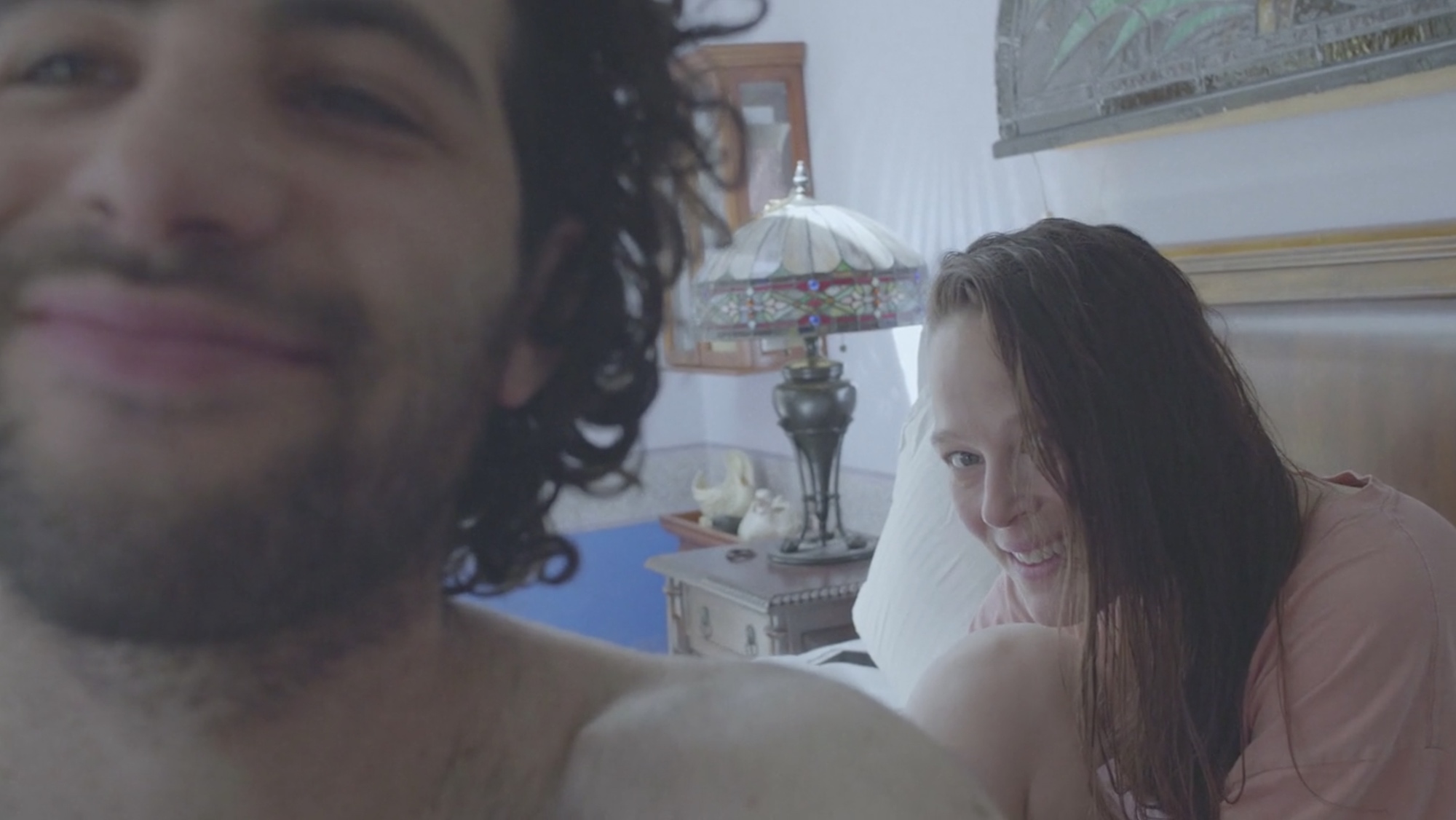 Was it a smooth process with all those reshoots?

Not at all. Everything that could go wrong, went wrong. We ordered clothes online for styling but they never arrived. We wanted to rent out a cool car, but due to lockdown, no one was willing to rent out their car. The internet on Bobbi and Or’s side was too slow to upload footage, so the plan to watch dailies didn’t work. Eventually they sent me selected moments on WhatsApp, which they filmed from their computer screen, or we’d do a video call where they filmed their screen showing me part of the footage, but the quality was so bad I could barely figure out what I was seeing.

It was very challenging. It was as hard for them as much as it was from me. They needed a director on set, just as much as I needed to be there. But these two are such amazing creators that, not only did they manage to overcome all these difficulties, but they also delivered beautiful high-quality footage.

Filmmaking is all about collaborating, bringing people together at a certain place and time, exchanging creative ideas ‘together’.

We’ve spoken previously about the spontaneity behind your work, I’m curious to know what shots/moments the dancers sent you that you weren’t expecting but made their way into the video?

Since this was done the way it was done, I’d say everything was unexpected. There’s always a gap between what you set out to film and the end result. But when you send a list of scenes or shots, and you’re not on set, the gap is much bigger.

There are so many things which are obvious to me as a filmmaker but I realised nothing is obvious if you’re not physically there. It was an exciting experiment and a good exercise in letting go. I am very specific about the aesthetics of my films, and here it was all based on letting that go and having no control over anything except for the emotions that needed to be portrayed.

Reflecting on the last couple of months, how have you found the shift to creating work remotely?

I think that both Earth Odyssey and Lost Horse were interesting experiments, but I wouldn’t want this to become the norm. If anything, these two projects made me really appreciate the craftsmanship of directing.

I know that there are a lot of remote shoots being done these days. It might be a creative solution for the moment, but I think it’s terrible. Filmmaking is all about collaborating, bringing people together at a certain place and time, exchanging creative ideas ‘together’. Real human contact is so important and no technology can replace that. I miss film sets dearly and I hope to get back to it soon.

A broad question but, are you optimistic about the future for artists in the current climate?

I feel very lucky to have been so busy during this period. I am always busy working on my own projects, but to collaborate creatively in such a rough time is a great privilege, despite the difficulties in execution. I am an optimist in my core. I believe in the good and I truly hope that good things will come out of this situation. After all, if we don’t have any hope, we’ll die.

Having said that, I see what’s happening in my country, Israel, at the moment and it terrifies me. The prime minister is taking advantage of the situation to get away from trial. The government is taking more and more measures which rob the citizens of their democratic freedom. It’s total abuse. People have been out of work for over four months and poverty is rising to the sky. The culture is dying and distinguished artists are hungry. It’s devastating. But I hope it’ll be a wakeup call and that the people will finally understand that governments are here to serve us and not the other way around.

Artists are normally the first to get hurt from an economical crisis, but art will never die as long as there’s passion. Creativity is a strong force and I’ve seen a lot of beautiful things created during this period. The world is changing dramatically and I feel that soon there will be a creative explosion coming from all the artists who were forced to stay at home. Artists never surrender to stagnation. Things are moving constantly even if we’re not moving much physically. We have to remember that it is our responsibility as artists to criticize our governments, reveal injustice, find beauty and give hope to others.