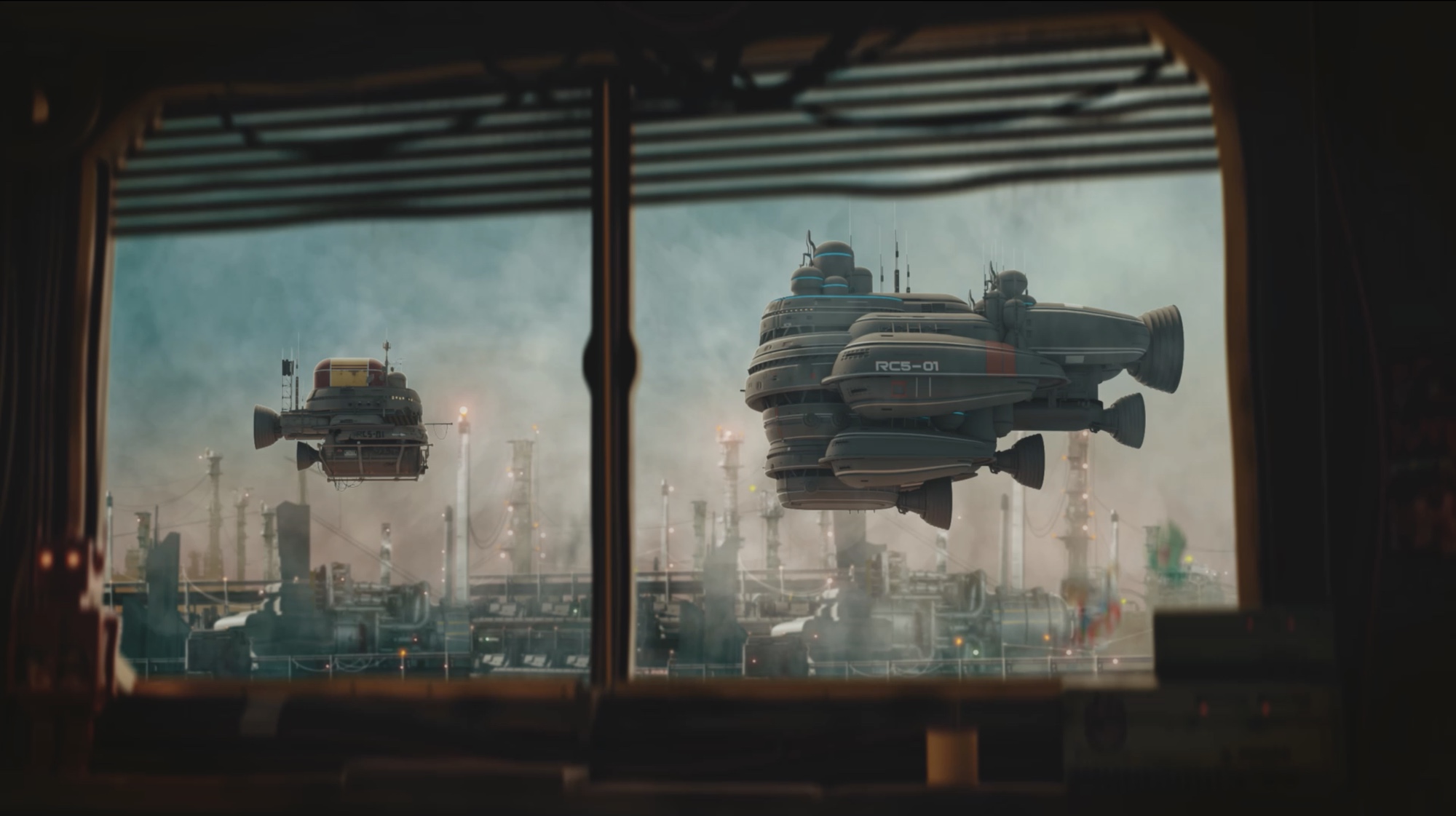 High in the sky of a sci-fi metropolis a lone spaceship is confronted by a much larger and more intimidating vessel. When the bigger ship asks the small one why they share the same identification number a strange quandary forms and a mile-high debate ensues. DN is delighted to present the premiere of Joe Roberts (previously featured here) and Karl Poyzer’s new animation Floaters, a futuristic tale with a wonderful tinge of modern day humour. Check out our conversation with the filmmakers below where we discuss how they embraced their passions outside of filmmaking to create this short during the pandemic.

Which of you brought the idea for Floaters to the table?

Karl Poyzer: The initial inception of the idea for Floaters was a love child spawned from a mix of us both wanting to shoot more live-action comedy, a privilege that was taken away during the pandemic, and my love for creating 2D sci-fi art, a side hobby of mine for the last 18 months in between DPing other things.

So, it was a case of bringing the both of you together?

KP: Joe and myself have enjoyed a great DP/Director working relationship on commercials and our previous short Kelly was doing well on the now mostly digital film festival circuit. Joe sent me the script for two spaceships having an argument and asked if we could make this an animation… and that was the last part of the process either of us had any prior experience in, from that point on we were in uncharted waters.

Joe Roberts: I’ve been in awe of Karl’s artwork since he first showed me these fantastic futuristic yet retro vibed artwork he’d been making as a hobby. At first I thought he was lying and stealing the artwork from the internet, then I assumed it was some sort of filter he was using. But then I realised he was just very talented and was creating the imagery with Blender and ProCreate on the iPad. So naturally, I stopped talking to him for a while, upset and resentful at the fact that I have extremely little artistic talent or the acumen to learn a new skill.

Is that when you decided to develop the script?

JR: I had the idea in the shower for two ships having a confused conversation over ship-to-ship intercom. I got out of the shower and sat down and wrote it all out while still in a towel. I got dressed then sent it to Karl. He asked me why I hadn’t been in touch and I said he’d been rude but I had now forgiven him and would he like to make an animation based on his artwork. He said he didn’t want to lose my friendship and agreed to work together on something that should take him no longer than four weeks. Five months later, I feel we both underestimated how much time learning takes.

What did the first steps in making the animation look like?

KP: In the first few weeks we had to decide how the hell we were going to actually make the thing with zero animation experience. The idea had already been formed in a way that meant we didn’t need to animate people and that was when we realised that our limitations could be the way that the project would stand out. Andrew Stanton once said don’t give them four give them two plus two and we didn’t have the technical ability to animate four so two plus two would have to work. Our limitations would hopefully make the project better rather than worse.

We realised that our limitations could be the way that the project would stand out.

After a week or so of creating designs for our lead characters we had our first go at animating them. We experimented with 2.5D techniques using flat matte-paintings, that then developed into more traditional 3D animation and we eventually, having gained some advice from a friend who actually knew what they were doing (Hi Joe Lawrence!), settled on a mix of the two. 3D animation for our characters and any foreground and 2D matte paintings for our backgrounds that would all be composited together later. We created the scene inside Blender and over multiple remote sessions via Discord we started to place cameras and edits until we had the film fully edited inside the software. 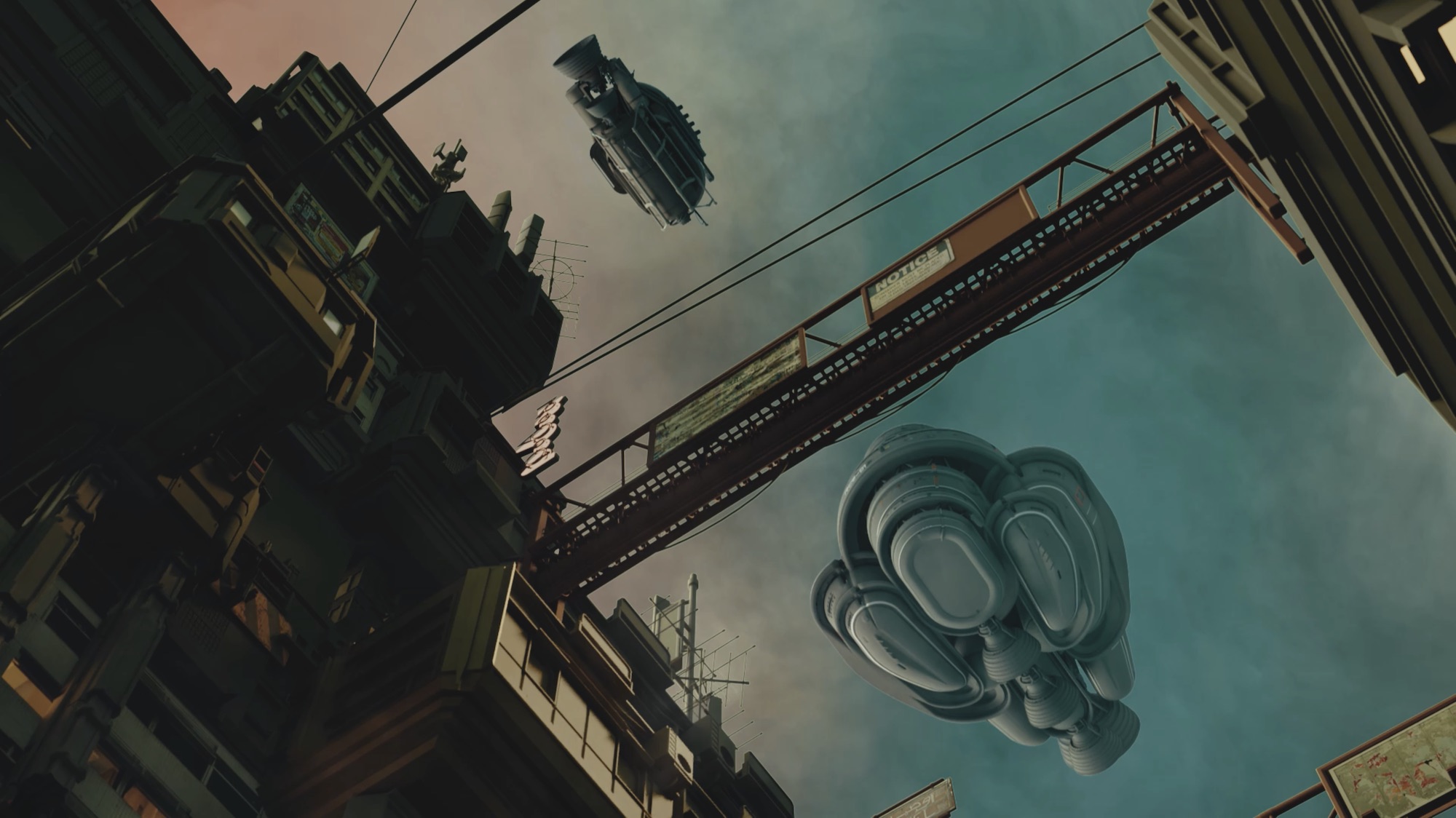 Joe, what was your role whilst Karl was developing the visual style?

JR: While Karl was focusing on working out how this could work, I asked Rachel Stubbings and Daniel Hoffmann-Gill if they would voice the two pilots of the small ship for us. I sent them early designs of the ships and the scripts and they kindly said yes.

Since none of us could leave our houses and the story in the script all unfolds over intercom, I set up a Google Meet so we could all chat and see each other and then got Rachel and Dan to record themselves into their iPhones. Rachel and Dan then sent us the files and I pieced them together at my end and then we used that compile as a rough guide for the animation. Later I asked Jake Yapp to be the big ship. He makes a daily podcast and is a very funny comedy writer so he has all the gear both physically and mentally.

I presume it was then a case of bringing everything together?

JR: After that, it was adding to, fine tuning and developing the look of the piece. That was all Karl, but he is very generous in his collaboration, and we kept in close contact and he wouldn’t complain too much when I had annoying ideas. The final part was the sound design from Tom Pugh. Karl and I had worked with Tom on our previous short film Kelly, he was fantastic to work with and was excited about the opportunity to play in the weird retro-futuristic world of Karl’s making. Tom did, as expected, an amazing job at building a soundscape with a light imaginative touch with a focus on storytelling.

Tom, how did you feel about being involved in making Floaters?

Tom Pugh: When I jumped on the first group call with Joe and Karl at the beginning of lockdown to discuss the audio for their upcoming Floaters project, I have to admit I couldn’t really predict how the final mix would end up. The idea of a conversation between three people, that takes place between spaceships, where we never actually see the people talking but where we hear the external space environments seemed a little ambitious. I quickly realised, after receiving the first edits and renders, that the writing and animation was going to be enough for this film to work and that my job was to add the touches to help bring it to life.

70s sci-fi, with a slight comedic, dystopian feel alongside a few Hollywood film references was the audio brief and I really enjoyed having fun with the sounds using everything from forklift trucks to force fields. The voices pretty much looked after themselves, all I did was place the voices within the cockpits of the spacecrafts, using a cockpit/spaceship bridge reverb. The finished film is something Joe and Karl should be proud of, while most people were filling their lockdown days with baking and documentaries about exotic pet owners, these two have created a very funny, unique film and I was happy to be part of it.

Looking back on the whole experience of making Floaters, is there anything you’ll take into future work?

KP: It’s tricky to quantify what in particular I took away from Floaters because it was the start of a totally new path for both of us. I hope these new creative paths remain open and this just becomes another tool for specific kinds of projects. As lovely as it is to be able to throw up a light of unlimited size in 3D space without the need for a crane or a lighting crew who you can overhear talking about overtime, it would be a shame if it took too long before we can enjoy the hustle and bustle of a real set again.

I hope these new creative paths remain open and this just becomes another tool for specific kinds of projects.

JR: I think without Floaters, the lockdown would have felt a lot more aimless, to be honest, it’s been a saving grace for me mentally. During the process, we’ve written four more scripts in this world of Kitchen Sink Sci-Fi and Karl and I are looking to make more down the road. The next one should definitely only take us four weeks.