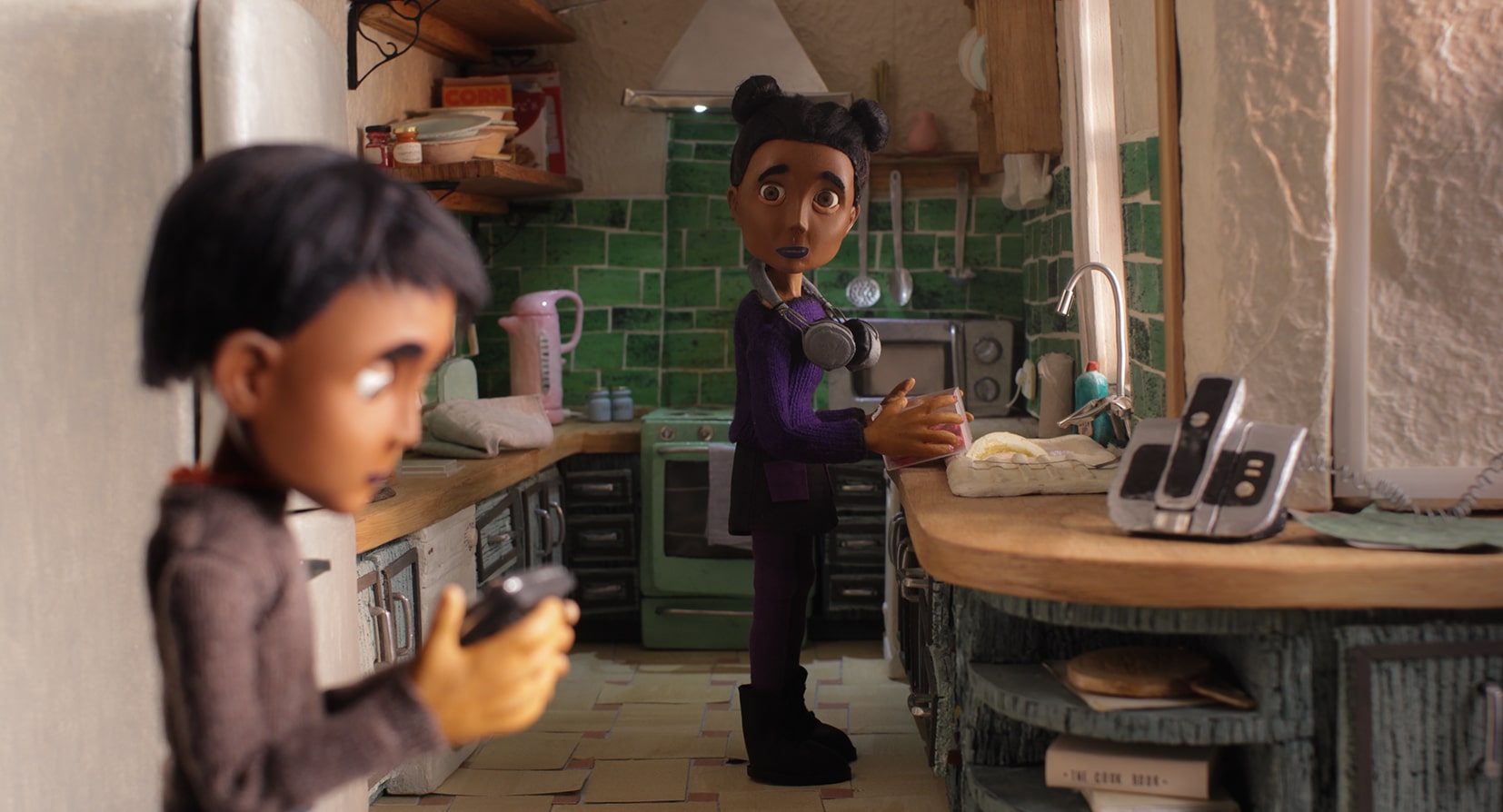 When you think of OCD an obsession with neatness and cleanliness is probably what first comes to mind. However OCD can also manifest itself in the form of intrusive thoughts – suddenly dark and violent ideas, urges or images that seemingly spring out of nowhere. Suraya Raja brings this internal struggle of mind and self-control to stop motion life in Don’t Think of a Pink Elephant, her visceral NFTS short about a teenage girl’s battle to control her compulsions. Suraya joins us on DN today to discuss creating puppets from scratch, the stop motion process and casting regional talent to voice her characters.

Why did you want to tell a story about a character battling with OCD?

I made the film at the National Film and Television School around December 2016. I was working on three potential ideas and it started off really different. I’ve worked in mental health, in things like offending and homelessness, for a long time. I’m really interested in how humans think and behave and how we’re all similar to each other. With OCD for example, intrusive thoughts are something that everyone has. It’s just that for some people it’s about trying to control those thoughts and them not understanding it’s not a reflection of who they are or what they might do. I wanted to make something that was relatable that showed how much more difficult it can be when it’s more of a problem.

Was showing the potentially destructive side of the disorder especially important to you or were you driven by a desire to dispel popular culture’s typical depiction of OCD as a focus on neatness?

Actually, at the beginning my initial idea was around contamination OCD. I had some visual ideas about how I’d like to do that that I was really interested in trying out in animation. But part of the thing was showing how in its true form, it’s kind of different to this misconception about neatness. At the same time, I decided I didn’t want to do something that similar. As I said, I experienced intrusive thoughts like everyone else, but I’ve never had OCD. I find that really fascinating because for me it’s just an intrusive thought and I know it’s not going to happen. But when you say it out loud, some people completely get it while others think it’s quite shocking. That was something I related to. So I narrowed it down to one theme.

I’m really interested in how humans think and behave and how we’re all similar to each other.

Walk me through the animation process.

We had puppets made with ball and socket armatures with skeletons inside them that you could move into position. They also had tie-downs on the feet so you could fix a foot through the floor. The animation was frame-by-frame, so we’d put the puppets in position, take a still image through a camera straight into a computer program, then move the puppets and take another one. It’s possible to shoot in what’s called “on-twos” where you shoot two frames of the same position one after another then move it which would be 12 frames per second. However, we shot at 25 frames a second.

I could imagine keeping continuity was quite difficult.

What you tend to do is shoot everything from one camera angle in the same physical set-up so you’re not moving the set around with a different camera angle. To prepare for that, you tend to pretty much make the film in animatic form before you shoot it. It’s basically like a storyboard except you put it on a timeline with really rough sound you have already pretty much worked out. Then as you film, you tend to replace those shots with your footage as you go on and keep re-editing throughout the whole process. So here you work with the editor before you even shoot.

It’s great to see yourself or the people you know represented on the screen.

The intrusive thoughts are represented by jump cuts, how did you create them?

I saw a lot of things in my mind before trying to convey it through writing, pictures and references to my team. It was difficult to find actual video references of anything like I was imagining. Quite often what I did was take photos of myself doing the action as a reference, as I found it quite difficult to visualise through drawing. Then we started building little shots like that or putting in placeholders or references, though neither were ideal. But with live-action it doesn’t matter so much, so once we put it in, we were just figuring out timing and seeing what worked.

I noticed a close-up of an actual cat!

Yeah. We did actually have a marionette of a cat. A friend is an amazing puppet maker and there are a couple of shots where it is that puppet however the camera is quite close so you don’t realise that it’s a puppet. But we did find while shooting in live action, it didn’t work quite as well as just a real live action cat. I didn’t want to have a cat need to act and go through that, but I found just shooting a cat being a cat and chopping that into other things with the sound and all that’s happening worked just as well. But the puppet cat was amazing; actually as it became better and better, her own cat started getting a bit upset and jealous of it.

The idea was to have the viewer anticipate things before they happen like you would if you had OCD.

The visuals are complemented by effective and pronounced sound design. How did you use audio to make it such a visceral experience?

Although I’m not a sound designer, I really love working with sound. I had a lot of references in the beginning from old Eastern European puppet animation. One that people might know is Jan Švankmajer, who I really love. I described the sound as ‘hyper-real’ but was told that doesn’t really mean anything. What I wanted to do throughout the film was take normal domestic sounds and enhance them to make us feel like we were in a place where everything was comfortable. With the thoughts, the idea was to have the viewer anticipate things before they happen like you would if you had OCD. So when she sees something, but before she actually has a thought, all the ambient sounds cut out to get us more in her head. We’ve got these really subtle breath-type sounds. Then that’s interrupted by these quite harsh, exaggerated, grating sounds. The idea with that is that when you go through the film, the viewer can follow that pattern. 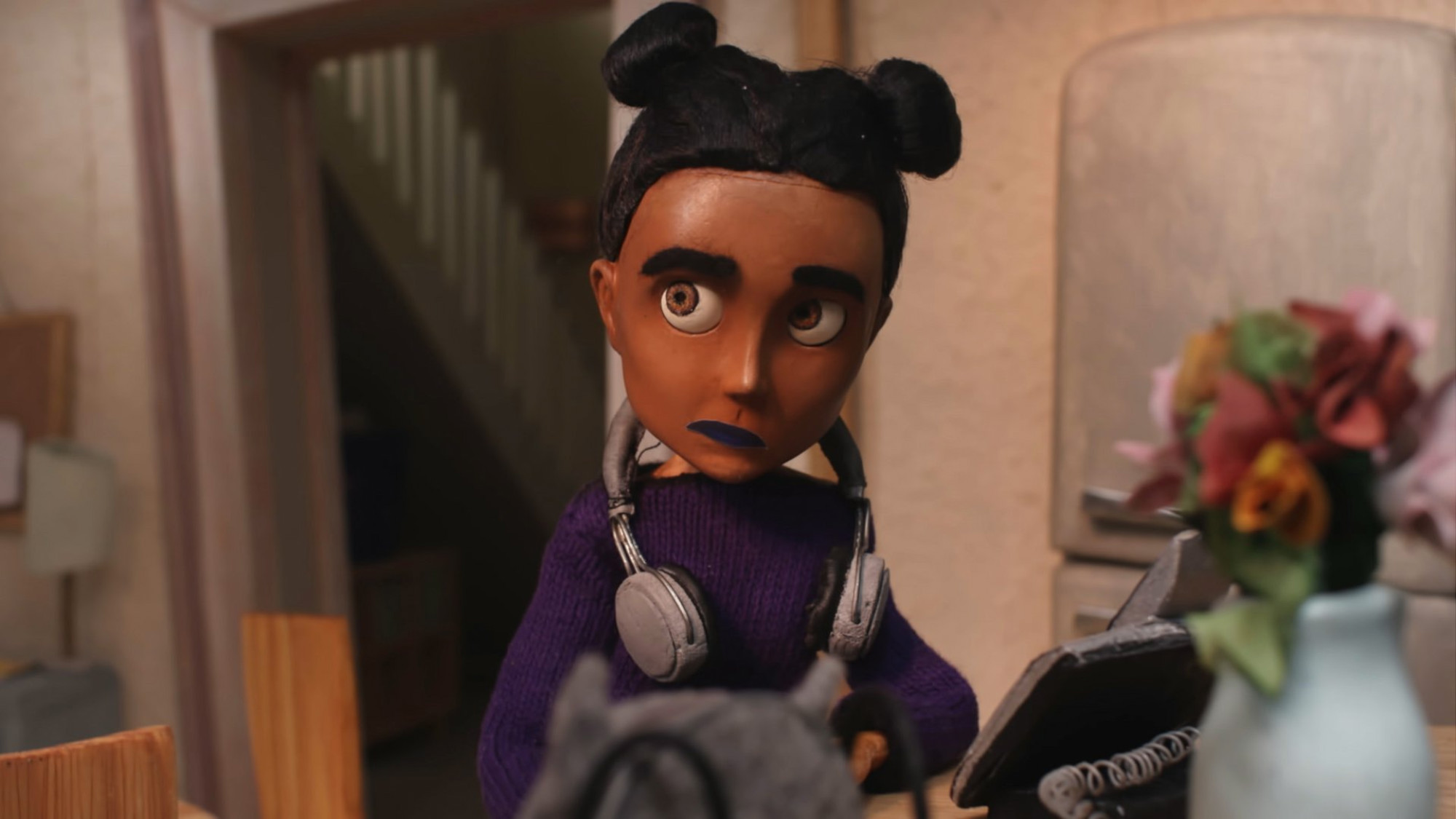 The film is voiced by Scouse-talent, which is refreshing for animation. How important was it to have Merseyside voices dubbing the film?

I didn’t make the decision I wanted to do that in advance but when I got to creating these characters, I did want to put it in a regional setting. Quite often the things I see are never Northern or anything else like that. I didn’t want to have people who had nondescript accents, kind of like the generic South England accent like they tend to be in a lot of things. For me this was more fun, interesting and nice to see. When you’re little you never see who you want so it’s great to see yourself or the people you know represented on the screen.