Nature can and has long been a source of great inspiration for the work of filmmakers. Whether it be a majestic mountain range soaring into the clouds or the minute intricacies found in the wings of butterflies, the world around us provides numerous jumping-off points to spark the flame of creation. In the case of Spanish director Adrián Suárez – last seen on DN with visual poem Alone With Everybody – a vacation walk in Mexico brought him face to face with a striking rock formation which made the parallels between our skin and that of the earth we all inhabit undeniable. And so was born sensorial short Skins, a beautifully realised experimental film which DN is happy to premiere on our pages today, alongside our conversation with Suárez in which we discuss his very hands-on approach to filmmaking, fortuitous casting and blending unexpected sound design with music into a configured whole.

Where did the idea for Skins originate?

I was inspired when on vacation walking along the beach in Puerto Escondido, Oaxaca. Those rock formations caught my attention because of their size and their cracks. I quickly established the parallelism that they were the skin of the earth and consequently I wanted to establish the comparison with the human being and the skin that covers the human being as well as Earth understood from different points of view and angles. The intention was to achieve a sensorial piece, a precious piece where the bodies and the earth are the protagonist in the same sense.

I wanted to explore the skin as a physical element, something material. The container where the continent can be found. The skin understood as the clock that shows the signs of old age, with its scars and wrinkles. The skin as a disintegrant element in relation to race. The skin as the biggest organ in our bodies, and through the one that helps you feel.

The intention was to achieve a sensorial piece, a precious piece where the bodies and the earth are the protagonist in the same sense.

What made you want to take a sensorial approach to this piece?

I often lean more towards these types of work. Those that are evocative, that speak more about feelings where there are humans but we don’t necessarily see their faces. In terms of scripting, the idea was to achieve an intriguing situation and after deeper exploration, to finish with something as simple as feeling the wind on the body. The objective was to try to achieve a piece that is not too long in order not to feel extremely heavy since we only had images of people and stones.

Could you tell us about moving from concept into production?

For me Skins is a very personal project where I got involved in a large part of the process and I tried to surround myself with friends and talented people for the execution. Many of the parts of the process were my own: the concept, the scriptwriting, the direction, the photography direction and the final editing.

After my initial discovery of the site, I quickly organized a second trip with a digital and film camera. Once in Oaxaca we found the two protagonists of the piece, Maria Fernanda Bautista and Daniel Stringer who were essential for the execution, for their bodies and skins and in the same way for their collaboration.

Where did you find Maria and Daniel?

I think this is a piece that was produced given to fantastic coincidences. First I found the rocks, then with the idea in mind I asked Maria Fernanda if she wanted to participate and she quickly agreed. I knew that with just one person it might feel very repetitive, and two days before we went to shoot we found Dan at a party, a total stranger. I described the project to him and what we were trying to achieve and he quickly said yes. It was a real piece of luck.

What direction did you provide them given Skins’ abstract nature?

I initially explained to them how I imagined the final piece was going to be so that they would have a generalized context. Later I was clear about where I was going to place them, and at that point we worked through different movements so that in editing we had enough material. I really think that sometimes they didn’t understand what they were doing but they also enjoyed it.

Do you think finding the perfect location shaped the film to be what it is?

It literally was. Those stones shocked me, they seemed beautiful in themselves and left me wondering. I knew that something powerful could come out of that location without much production effort. Sometimes it is difficult to propose that sort of location to shoot a few shots, due to its remoteness but I knew that something interesting could come up with the rocks being the main element of the narrative.

What camera did you use to shoot Skins and how did you ensure that those details which first drew you to create the film translated to screen?

I used a Nizo Bruan 801 super8 camera and a GH5 camera in order to get the different textures which were essential for me. In terms of colorization, it was a process that was carried out in great detail by Esteban Robles. The challenge was to match the tones of the skins as much as possible since they had been recorded at different times of the day. On the other hand, we also wanted to give it a particular look where it was a piece where the stones contrast with the blue tones of the sky and the sea.

Those stones shocked me, they seemed beautiful in themselves and left me wondering.

I started coloring the piece myself, but then I realized that I needed a professional which is why I got in touch with Esteban who has great experience in this regard both in movies and in commercials. I like the way he works as he is meticulous and detailed. Whilst working together, we found it interesting to experiment and turned the rocks towards more green and yellow tones and unified the sky towards a characteristic blue. He then worked all the skins in a meticulous way and to finish we decided to add a certain texture, without being gimmicky, to achieve our final look.

Do you normally involve yourself in so many parts of the filmmaking process?

It is one of those projects that one catches hot, and I prefer to go quickly to execution rather than take a long time in the process of looking for people and lose the freshness of the moment. As a director, I do like to always get involved in all parts of the process, I think that’s the way it has to be. The important thing is to surround yourself with talented people who you can connect with and who work in the same sorts of ways. It is also true that I particularly like getting my hands dirty! 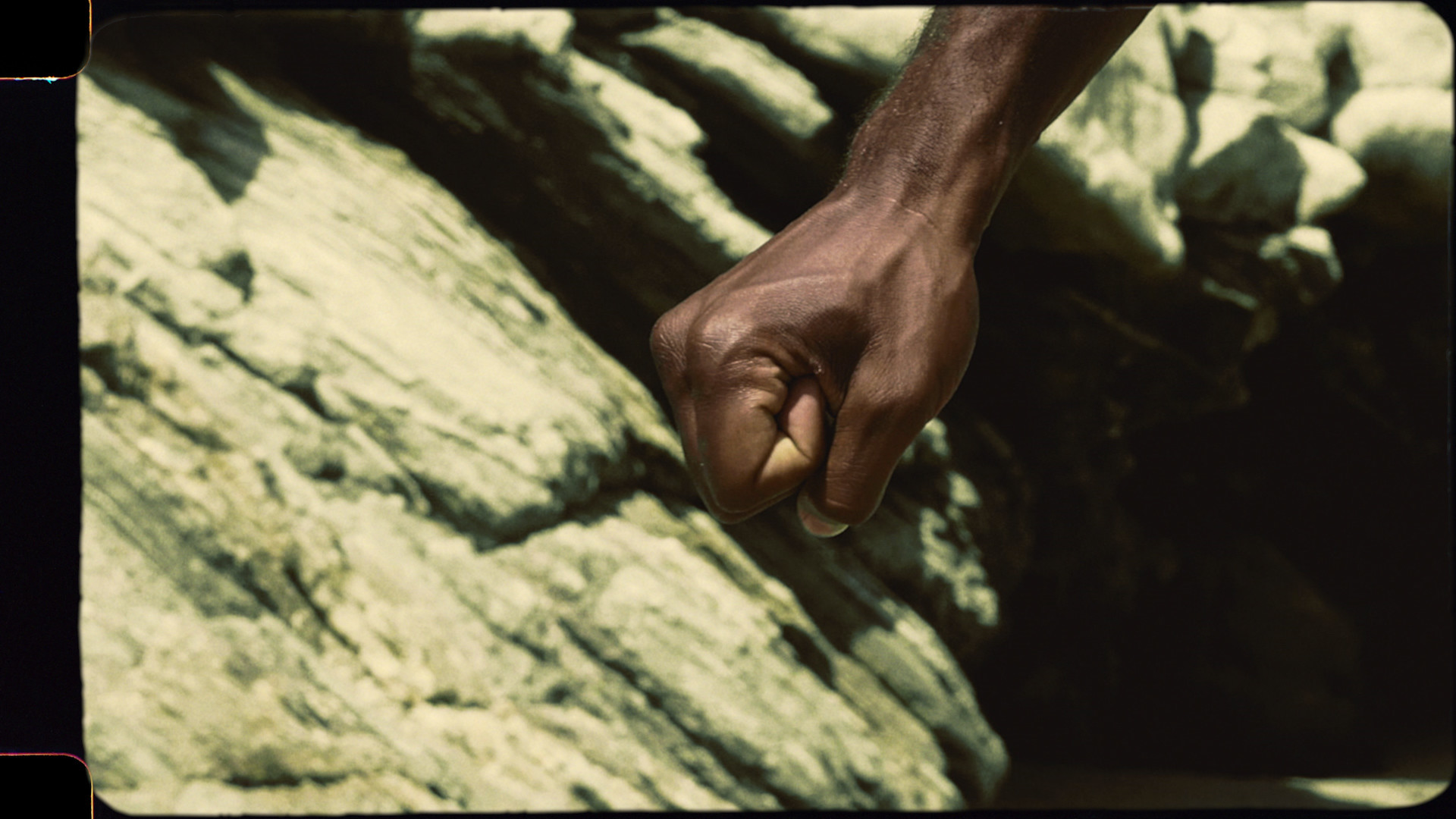 What were you searching for when putting together the soundtrack for Skins?

I love the style of soundtracks where the sound design mixes with the music, configuring a whole. For this I worked with Santiago Ramírez and his studio Real Music who really managed to grasp what I was going for. I am in favor of thinking that music, sound design and speech have to become a unit. I really like soundtracks where the actual design is part of the music. These were the instructions I gave to Santiago.

I really like soundtracks where the actual design is part of the music.

I wanted a ‘musical unit’ capable of transmitting intrigue, spectacle, and in the same way certain elements that would make it particular, so we decided to include unexpected sounds such as certain laughs, an old radio or some whistles, which without a doubt generated a particular atmosphere. For me the unexpected twist at the end is very important. Despite being a dense script, the closing is somewhat vain and for this reason we considered that there had to be a musical break, to which we added some guitars.

On a daily basis I continue to work on the execution of commercials, and with regard to personal work and thanks to this sensitive piece, new opportunities are arising. I have also been trying to develop a project based on boxing for some time, but for one reason or another I have had to postpone it on several occasions, so I am looking forward to restarting it.