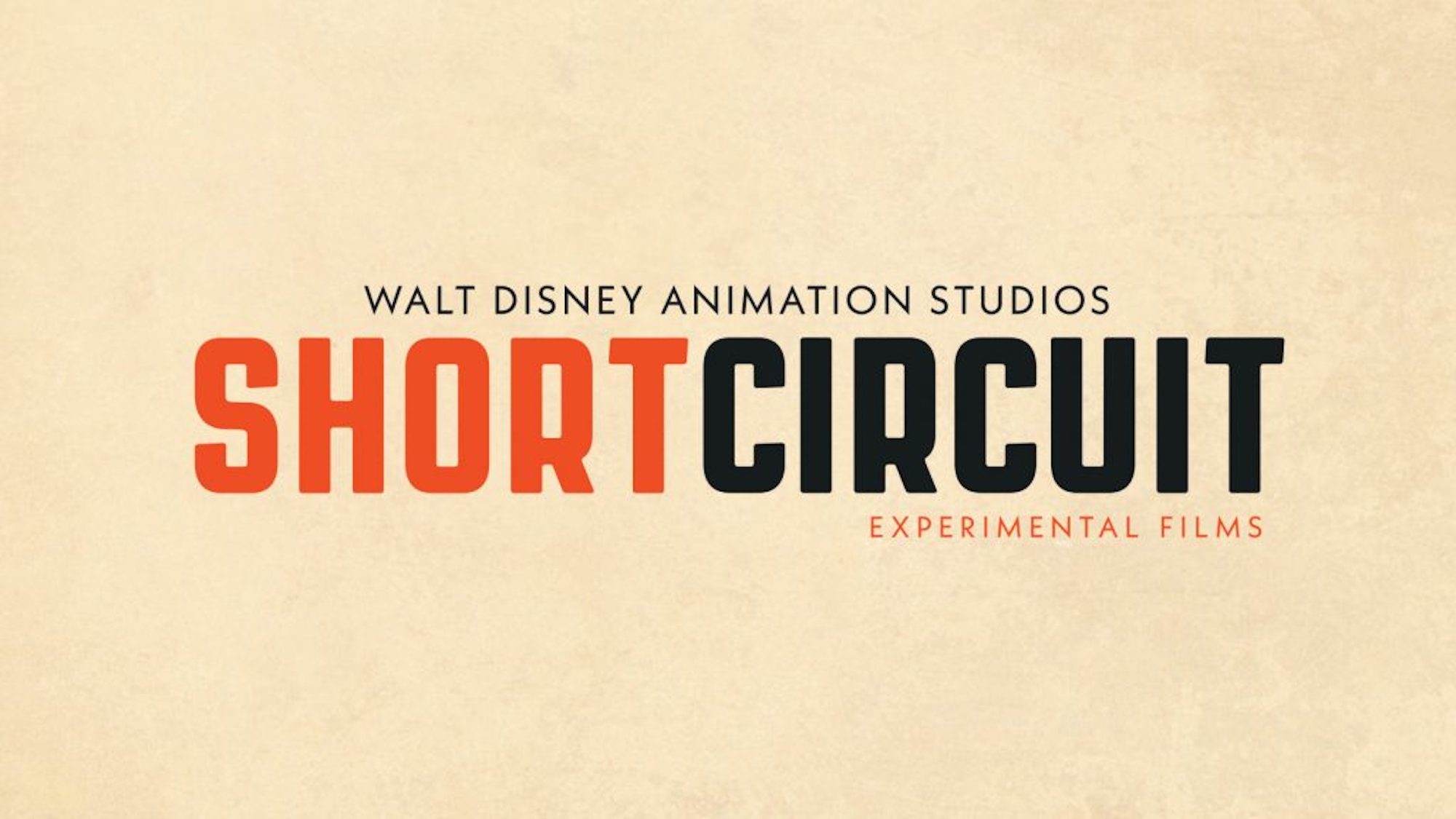 Few studios in the world have a house style quite as recognisable as Disney Animation. With hundreds of animators working on individual features, their films are understandably beloved due to the immense detail that is poured into each frame. For those interested in what Disney can do when allowed to push the boat out in terms of artistic expression and experimentation, look no further than their boundary-pushing Short Circuit programme. Similar to Pixar’s SparkShorts, the programme allows animators to pitch their own projects and learn the craft of directing, incubating the next wave of the studio’s talent.

While season two of Short Circuit offers a smaller program than the first, the shorts this time round are just as wide ranging as before – spanning from mythical tales to urban adventures, tearjerkers to satires. We caught up with Jennifer Newfield production manager of the shorts, as well as the talent – Jacob Frey with Going Home; Liza Rhea with No.2 to Kettering; Ryan Green with Crosswalk; Kim Hazel with Dinosaur Barbarian; and Riannon Delanoy with Songs to Sing in the Dark – to discuss working across different teams, taking inspiration from personal stories, using classic styles and much more.

Tell me what the Short Circuit programme is about and how it incubates new talent?

It’s about giving opportunities to new voices in the studio, plus an arena to experiment on a small but mighty scale.

What’s the timeframe for the programme?

The programme’s evolved a lot over time. When the programme started, about six or seven years ago, they would have about three to four months. What I enjoy about the evolution of the programme is the way we’ve been trying our best to fit it in when it’s most convenient for directors to take time away from their projects. So we are able to prioritise their creative integrity. Sometimes it’s a rolling schedule over a matter of years, but we make sure we set aside the time so they can accomplish it.

The shorts of Disney’s past are so valuable, it’s what we build upon.

Yeah. I act as a kind of all-knowing liaison where I receive pitches, then I work with filmmakers to refine those before they submit them to a committee. I pull together a committee of people who are filmmakers at the studio, directors of features development, technology representatives or visual effects supervisors. They have no idea who’s submitting and we go over pitches blindly. I personally pull the feedback from those committees and bring that back to the filmmakers. Even if they don’t get selected one round, they can resubmit their ideas later based on the feedback and still keep improving and honing other pitches. 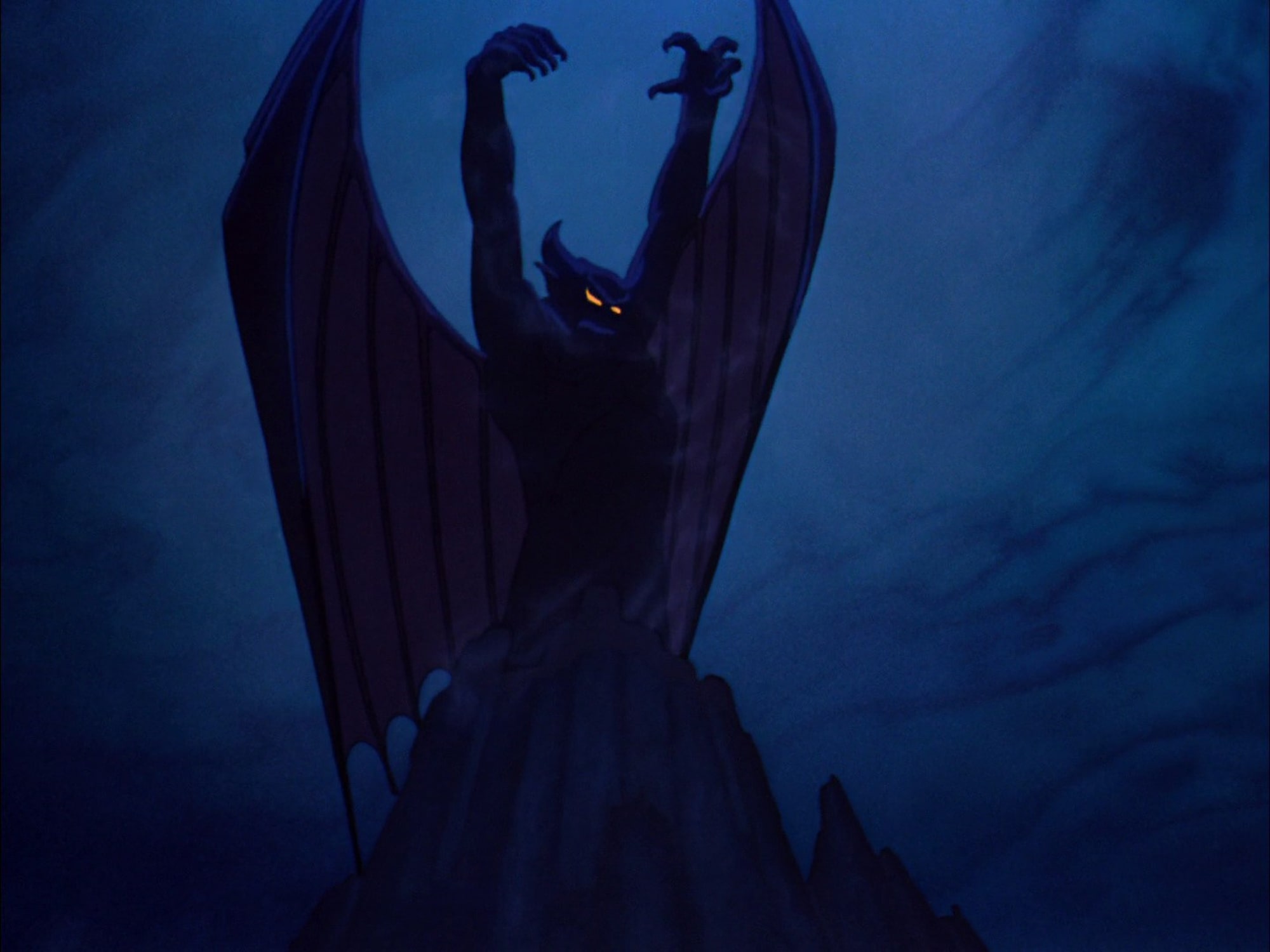 Night on Bald Mountain from Fantasia, a high point of Disney Short animation

They’re seen by all at the studio and spark some ideas for sure. I know some of the Short Circuit directors are reached out to by filmmakers at the studio who ask them how they accomplish things and where their inspirations come from. I think it has some influence. I think that its intention is to take the tools that we have in our studio and push them into different aesthetics.

It’s about giving opportunities to new voices in the studio

How will the shorts be supported going forward? After all, shorts are crucial to Disney’s identity.

Short Circuit is a very supported programme by the executives at Disney Animation, which is key. I think Short Circuit is beloved by a lot of people because they all know they can have a shot to direct something and it will be seen by the top people at the studio. That’s why we continue to make sure that we keep making more of them. The shorts of Disney’s past are so valuable, it’s what we build upon. It’s why our programme exists and there seems to really be an appetite for that, which is great. 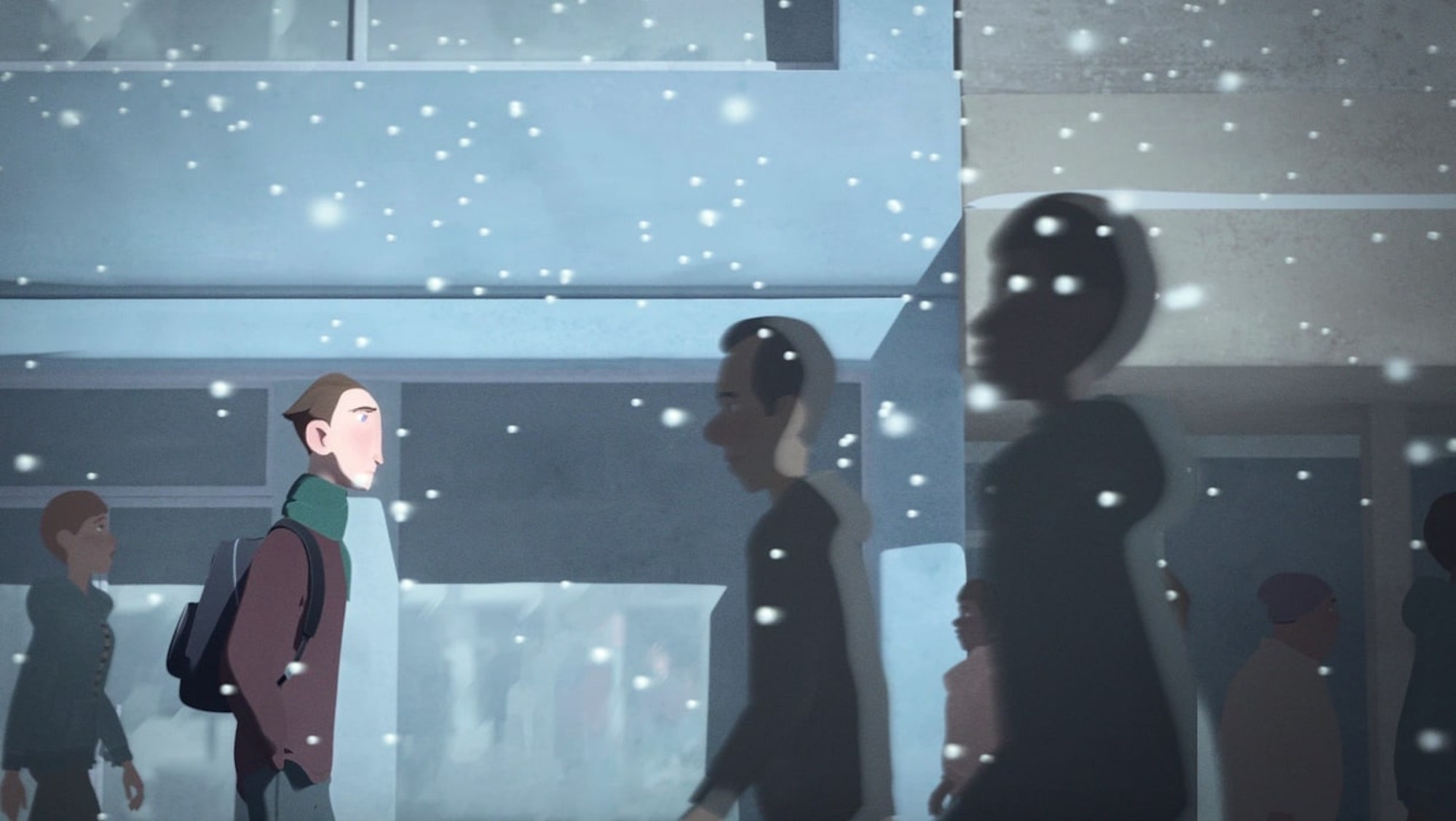 These three shorts all deal with city spaces. We have an American city, Hilden, Germany and Kettering, England. I wanted to know about the challenges of creating these places and using that space.

Jacob Frey: That was definitely a concern when I started working on the short, as we had to create an entire city from scratch. I wondered how we could achieve that in the short time that we had. There was a lot of planning going in as to how to achieve it with a small amount of resources. We pretty much created a set of buildings that we could swap colours on and scatter across the entire city. The other challenge was populating the city with people. The references are my German hometown and we had to create feelings specifically for the short. But I had a great team who sat down right from the beginning and came up with a strategy on how to achieve this.

I had to figure out which department at Disney handles this!

Liza Rhea: I really wanted my short to be authentic because it’s something I experienced on the bus going to school. I wanted the roads that the bus drives along to be pretty accurate to the ones that I grew up on. David Womersley was the art director on my short and is also British. We had a really good sensibility of the architecture and all the things that come with those buildings. Combined with Google Earth and Maps, we created a lot of different hodgepodge buildings, like pubs, corner shops and kebabs.

Ryan Green: This intersection was inspired by the one outside the Disney Animation building, but we went for a big, absurd city with just one main street that goes on to infinity where this is the only crosswalk you could possibly cross. It was just that feeling of him being surrounded by modern technology, with very few bits of green. No plants or trees. And of course, the traffic light. These are his antagonists. 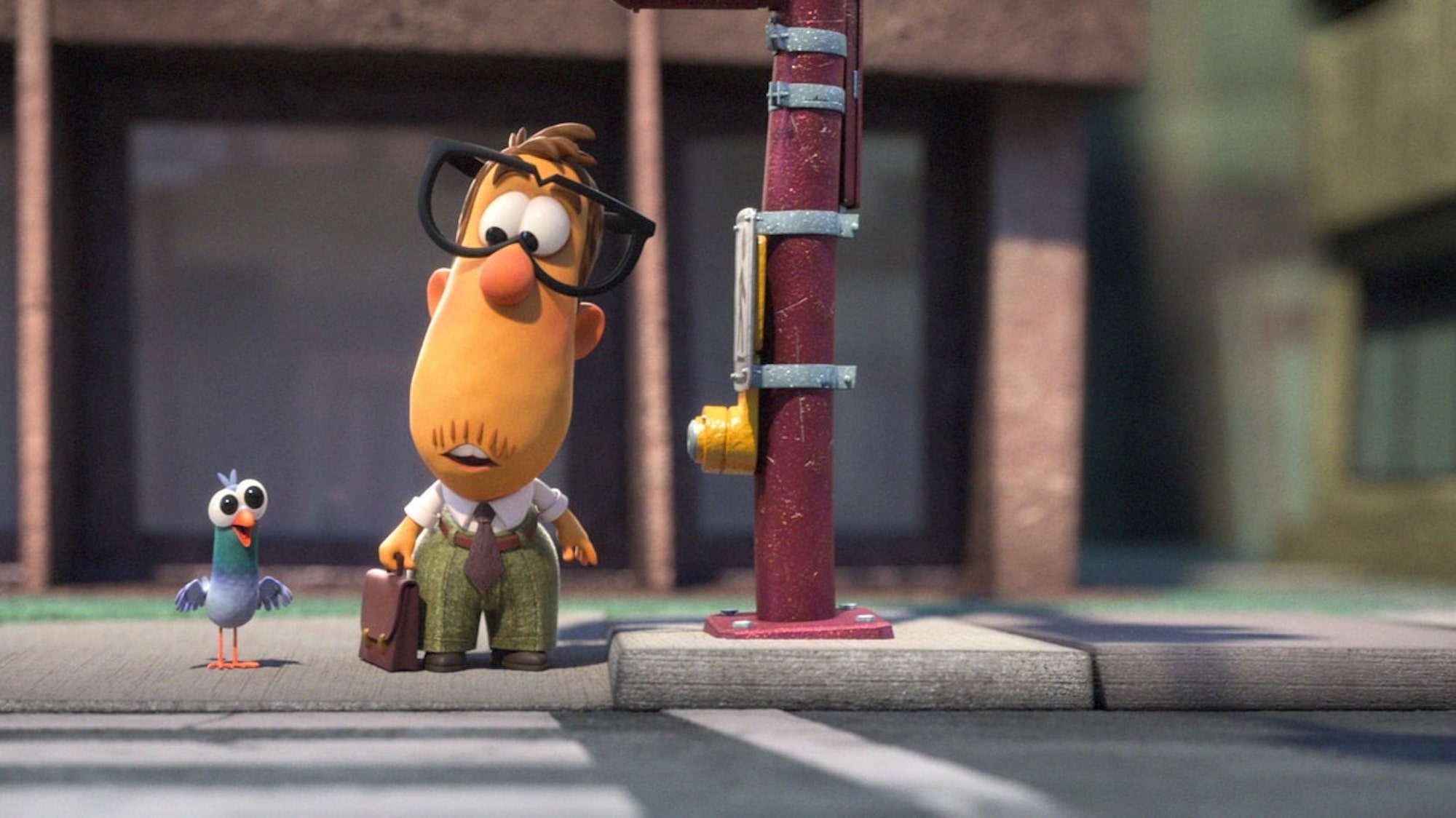 I really liked the opening sequence in 2D, which follows this classic evolutionary sequence. You drew that yourself?

RG: That was mine. That came about because I had animated in the past and there are these goofy shorts coming out by these classical Disney animators. Luckily, the stylised 2D animating that we did for this matched the poppy stop-motion style that was after it. That was really fun.

We went for a big, absurd city with just one main street that goes on to infinity.

Liza, I loved the use of colour in your film. What was the challenge creating that transition from sepia tone to these bright lovely colours?

LR: I come from an environment modelling background. I had to figure out which department at Disney handles this! Will this be like an animated texture and who would be good to work with? So with my producer and VFX suits helped me figure out this is something that effects can handle. Working through the characters and the whole bus was a challenge and there were a lot of iterations but I’m proud of how it turned out. I hope you get that real Wizard of Oz moment.

No.2 to Kettering – Liza Rhea

Jacob, I live abroad and every time I go back I notice something different. Did you start to notice all these differences every time you’d return home?

JF: Absolutely. It’s based on going home and seeing how things start to change. For some reason it’s become really noticeable, so much so that every time I go home I’m sad, even though I’m conflicted because I’m excited to see my parents. And facing my parents getting older, that’s just constantly on my mind.

Both Songs to Sing in the Dark and Dinosaur Barbarian are mythical, pre-civilisation spaces. I wanted to ask which classic cartoons influenced the style of these films?

Kim Hazel: The classic cartoons I’m inspired by are ThunderCats and Care Bears from the 80s, but also combined with the Xerox-era Disney sketchy pencil line like in Jungle Book and 101 Dalmatians.

I’ve also really been inspired by the indie animation scene.

Riannon Delanoy:: My favourite Disney short has always been Night on Bald Mountain. It’s creepy, progressive, primal. I’m also a big fan of Lorenzo and all these experiments mashing up 2D and 3D. I’ve also really been inspired by the indie animation scene. With the advent of streaming and the internet so much more stuff is available. People are just doing crazy, amazing things. 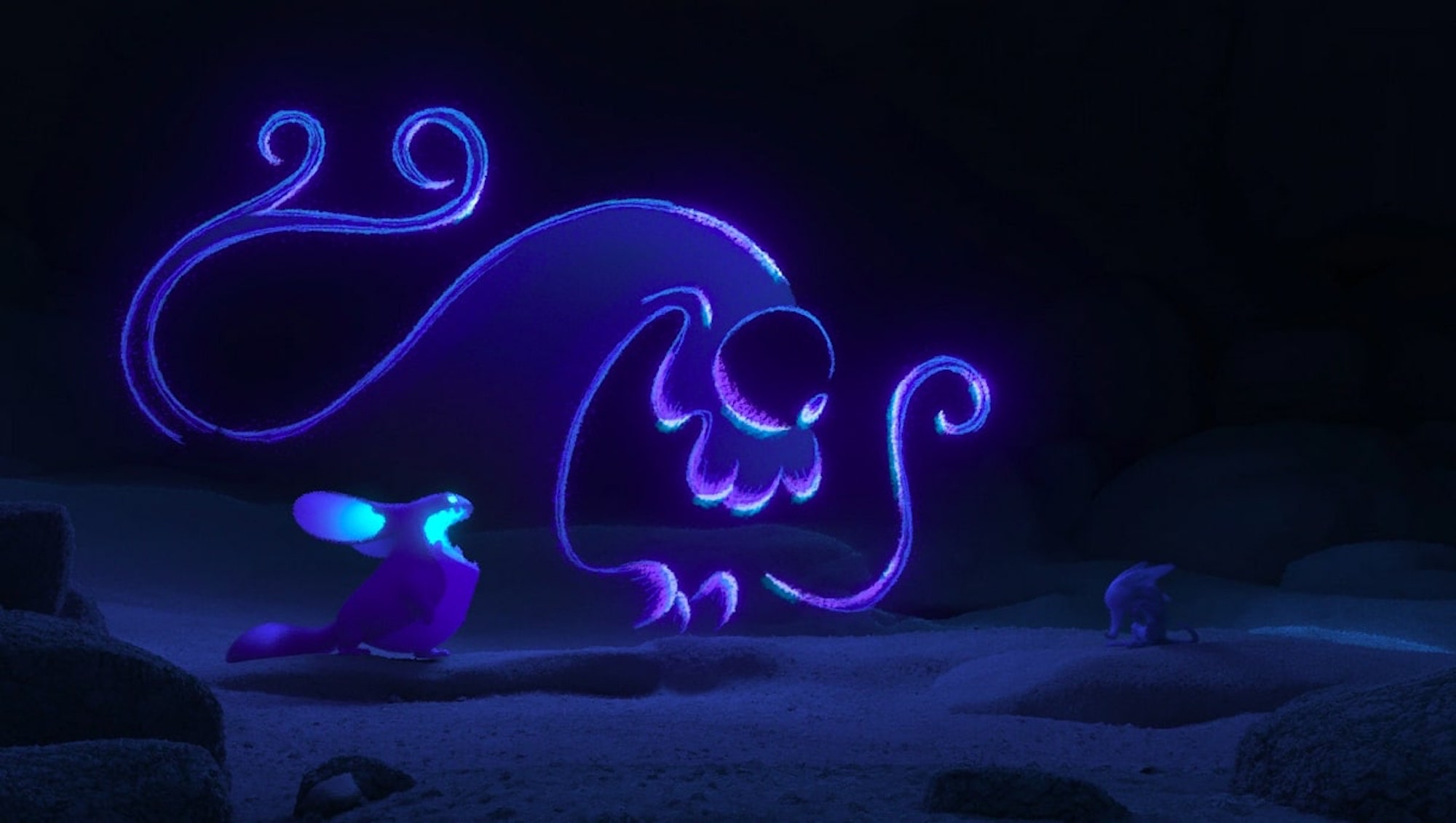 Songs to Sing in the Dark – Riannon Delanoy

Riannon, could you tell me how you combined 2D with 3D in your film.

RD: I storyboarded the short, then we did a layout pass in 3D. I would have animators go in and do their 2D pass. So very basic storytelling poses with 3D, then I would stick the 2D plate into the scene with the 3D character, so they would animate 3D with the 2D in there. Then with the 2D on a plate on the scene I could do any camera movement that needed to happen. Then 2D cleanup was done just straight on the frame, out of Maya. You could do whatever cleanup you wanted to do straight on the frame.

My favourite Disney short has always been Night on Bald Mountain.

Kim, you worked with animators you had adored for years. What was that like having them on your short?

KH: It was a dream come true. Mark Henn gave character notes on something that I came up with and never thought would exist in a million years. Also Randy Haycock was the supervising animator of Prince Naveen from Princess and the Frog and Clayton from Tarzan. I don’t know how to sum it up other than magical and amazing. 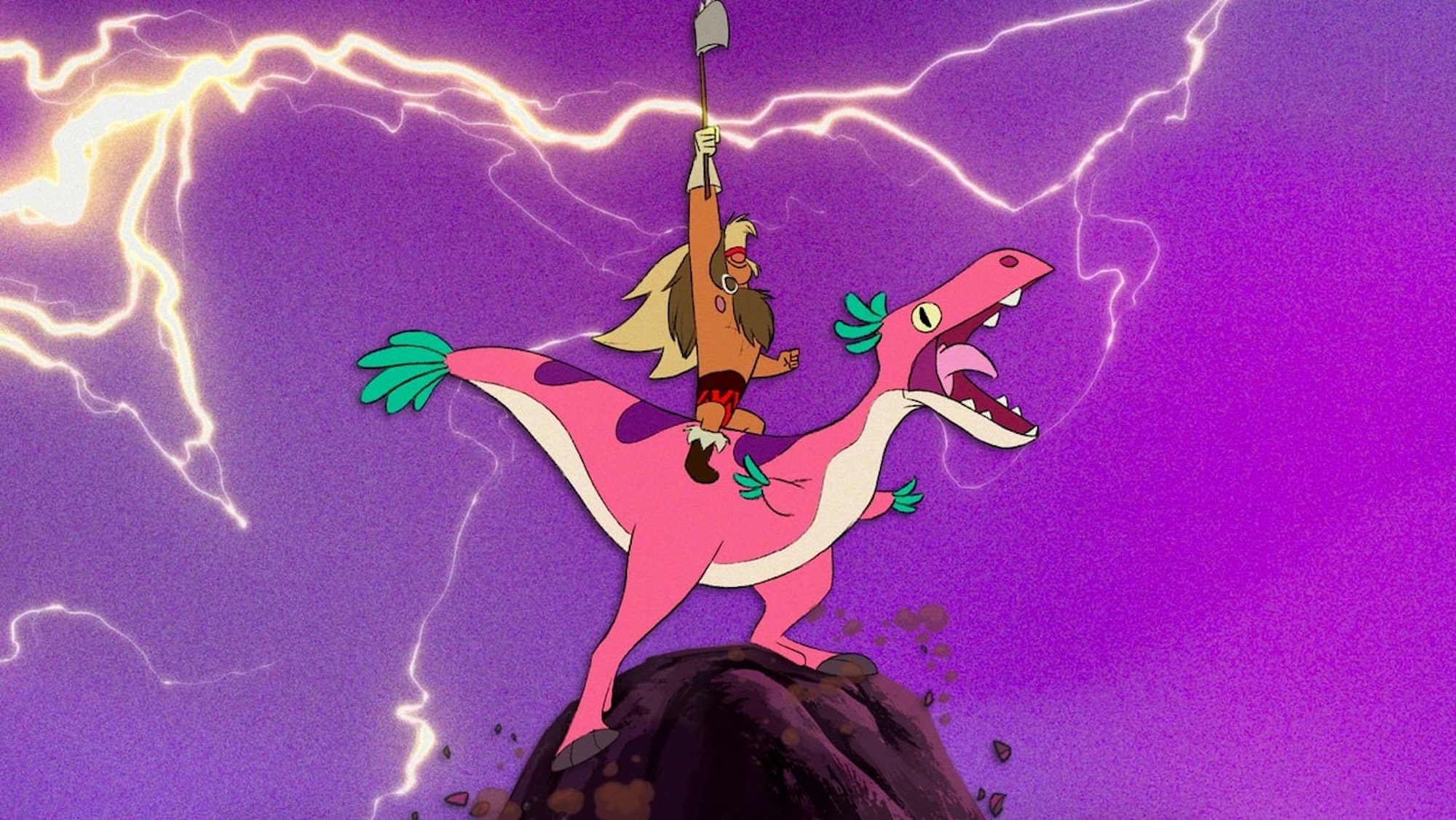 Riannon, your short is the most abstract of the five. What was it like trying to create a narrative with this abstract style?

RD: I have an interest in evolution and animals. I also think a lot about fear and how it’s a good idea for us to try and confront and become friends with the things that scare us. In an early version of the short, both red and blue characters were in a purely visual duel. There wasn’t much story. I was then like: “What if I made the red one more afraid to create more conflict?” So he goes from being scared of everything to confronting and becoming friends with this blue creature.

With the advent of streaming and the internet so much more stuff is available.

Kim, I loved the song in your film. Tell me about the band you worked with?

KH: When I submitted Dinosaur Barbarian to the Short Circuit programme, I included a little poem of what I thought the theme song could be. It was important to echo 1980s theme songs where they say the name of the show in a musical way. After I was selected, I fleshed that poem out to have a three-act structure in 90 seconds. Disney Music sent me a few artists to consider to bring the song to life. I went with the Mondo Boys, as I loved that they worked on such a huge variety of things. I sent them some inspirational music and my poem and they came back with adjusted lyrics and the full song. The version they sent me was incredible and I didn’t really change too much from that version.

Disney’s Short Circuit series is available to watch on Disney+ from August 4th.