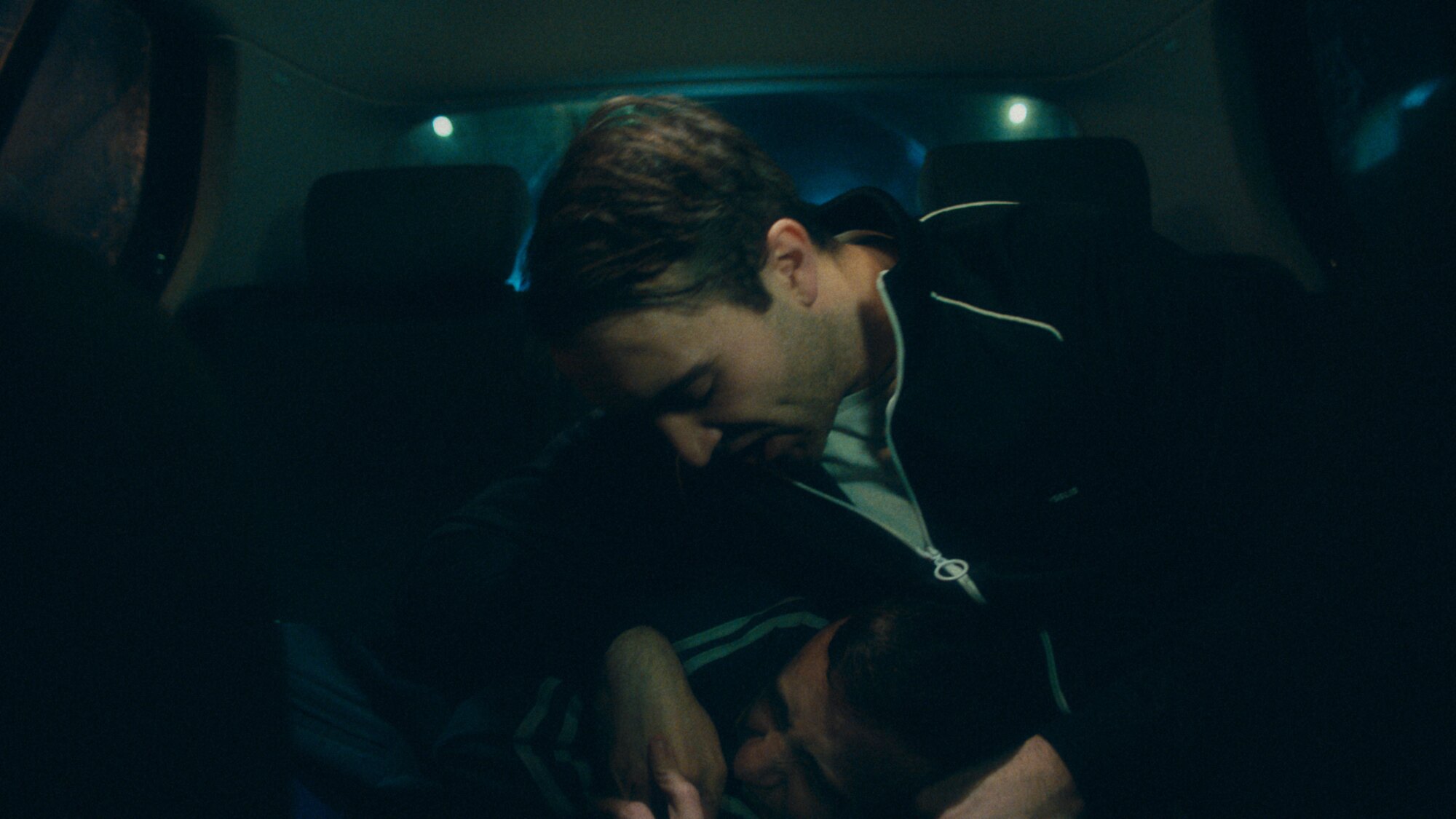 We’ve all seen the film where a bunch of threatening men grab someone and throw them into the back of a vehicle, but when do we ever see a film which showcases the tedium of the following hours in which captors and captive slowly make their way to their destination, as their facades of bravado crumble away. Sion Thomas’ short film Face Down In The Back Of A Car is a subversive crime drama which encapsulates the shallow machismo of criminal life. It’s also really funny. Thomas and his actors capture the posturing masculinity of these men hilariously and as the journey progresses, things only get more ridiculous. Directors Notes is delighted to premiere Face Down In The Back Of A Car today alongside a conversation with Thomas who discusses his desire to explore an aspect of crime cinema we don’t usually see and the need to blend handheld and static shooting styles to faithfully depict it.

The concept of the film is so unconventional. Did it begin as a want to convey something we don’t usually see on screen?

The initial impetus for making Face Down in the Back of a Car was myself and Owen wanting to work together. We are both Welsh and share a drive to tell stories that portray Wales honestly, breaking the romanticised tourist board version of myths and dramatic landscapes. However, because of our limited funds, we had to make something that was simple and we could shoot in one day – or night as it transpired!

It started out as an idea for a film set entirely on the back seats of a car, which would be this straight up tense Welsh crime drama, but we decided that had been done a million times before. Instead, in Face Down in the Back Of a Car, we wanted to explore what we don’t see in this scenario. The long drive between those two stops, where the macho posturing fades, the adrenaline drops, and boredom and awkwardness sets in. A group of men, stuck in a car together, for hours.

How long did it take to fine tune the script? There’s a real finesse to the way that posturing between each of the men fades.

We wrote the script over a couple of months. Owen would come round my house after work on a Thursday and we would sit at a table and just talk for hours about the characters. We wrote these huge back stories for each of them, charting their friendships, jobs, school life and status in the local community. Once we had a clear idea of their characters, we started to structure the script. We always wanted the first minute or so to feel like a traditional crime film, in an attempt to surprise the audience when it settles into this awkward film about men driving around aimlessly. We then obsessed over how the characters spoke, we wanted their dialogue to sound as authentically South Walian as possible. 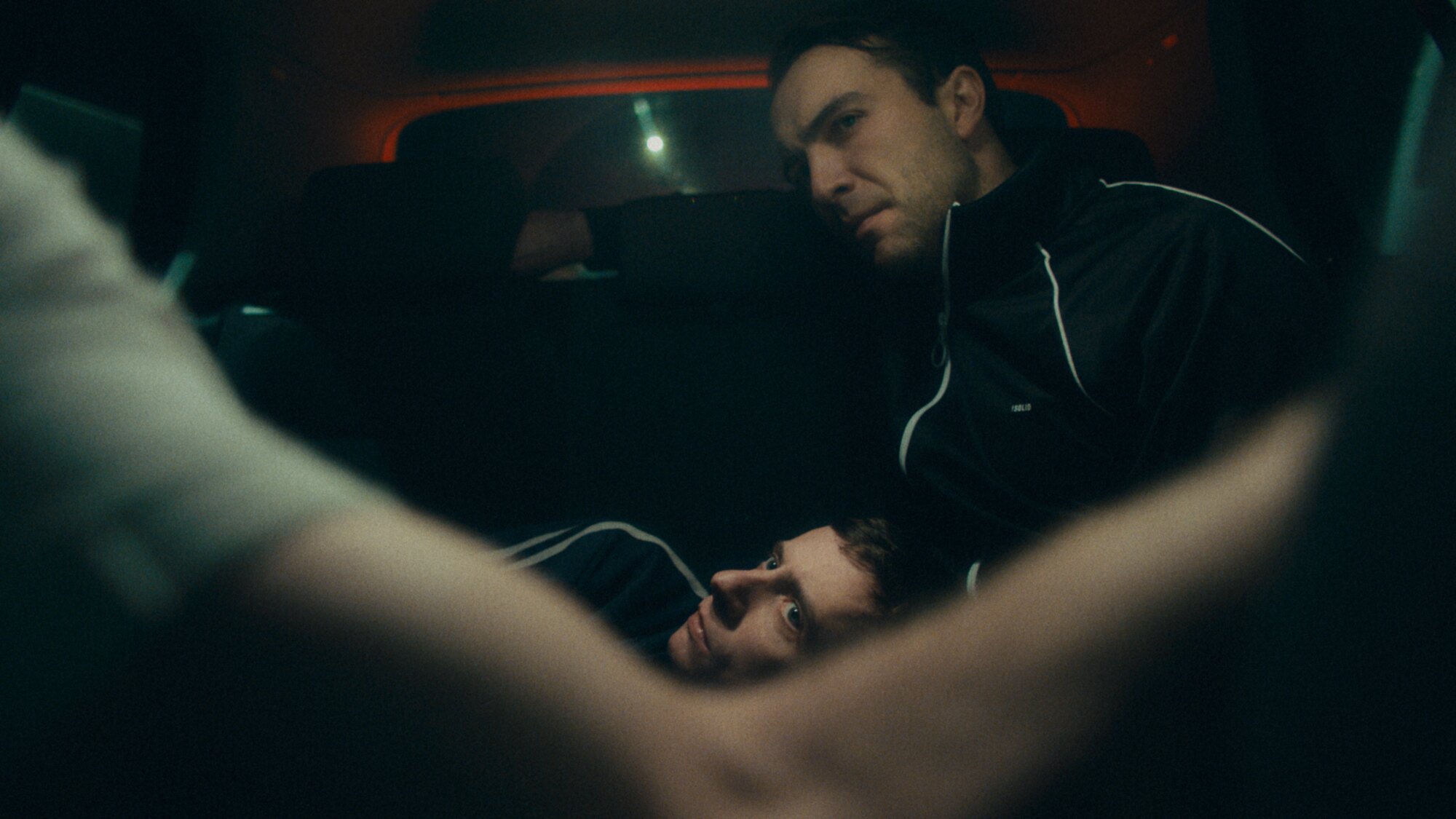 It’s a scenario that I imagine would be great fun to work on with your actors. What was it you were aiming to explore through their characters?

These characters had to be real, not the usual romanticised badass hardmen. Beneath the bravado, they are deeply insecure and pathetic, men trying to find redemption through a violent act they are too scared to enact. This film portrays the emptiness of aggressive projected masculinity, the neuroses that propels it, and the shallow depths beneath it.

Was there anything in particular you were looking for when casting each of these characters?

As the film is just four people in a car our main focus in pre-production was casting. We wanted all the actors to come from South Wales as their accents were so important to the characters. We didn’t want anyone faking it in the film. We wrote the part of Giggsy, the mouthy guy who’s been kidnapped, with Darren Evans in mind. I don’t think we ever told him this but we had a picture of him up on my laptop when we wrote the character. I remember Darren from playing Chips in Submarine. I always thought he embodied this very archetypal cheeky, mouthy, young Welsh man, who you should hate but actually find endearing. After sending him the script, and spending an afternoon in Tredegar Wetherspoons together, Darren came on board.

These characters had to be real, not the usual romanticised badass hardmen.

We then spent a long time looking for the other actors, as each role needed to feel distinct. We found Gareth Tempest, who could embody the resentful Liam. Then there is Gareth Watkins, who played Kieran, the blowhard failing wannabe gangster. Finally Rick Yale as Wayne, Liam’s stoner friend who after begging Liam for ages, is being brought along for the first time.

The rest of pre-production involved us begging and calling in every favour we could to get the equipment to shoot, and the crew to come and work a long night, for free. This film could not have been made without the generosity of the actors and crew who all gave up their time for free to get it made.

Could you tell us about the considerations that informed your shooting style and what the practicalities were of filming in such tight quarters whilst on the move?

We shot on an Alexa Mini that a local camera rental gave us for basically nothing as a favour. For the first scene it was handheld, with the DoP Tom Doran operating it and getting into the car with the actors, and then for the rest it was rigged in place between the front two seats. So, the shooting style follows that initial idea of the script, opening with the exciting trope of a man being violently thrown in a car, then descending into mundane reality, by starting handheld and then becoming totally still. We shot the film over one night with just the cast in the car, which is actually my car, with the day scenes at the end shot as the sun was coming up. So like their characters, the actors were stuck in a car, just the four of them, all night. The first scene aside, the set up was very simple; lights, camera, and mics set up in the car, and the actors were able to just focus on their performances.

Owen drove a van with the crew in just in front. The van had to be within a certain distance of the car at all times because the sound guys needed to be able to hear the mics, which was especially difficult on the opening shot when the car had to feel like it was speeding away. We started filming on industrial estates on the outskirts of Cardiff because we worried about being done by the cops because the rig set up was so dodgy. But by the middle of the night we had what we needed, so we just went for it and drove down busy, well-lit streets and reshot everything. The performances were better then, the actors were really living their characters and felt more real. That’s where most of the final takes we used were shot. 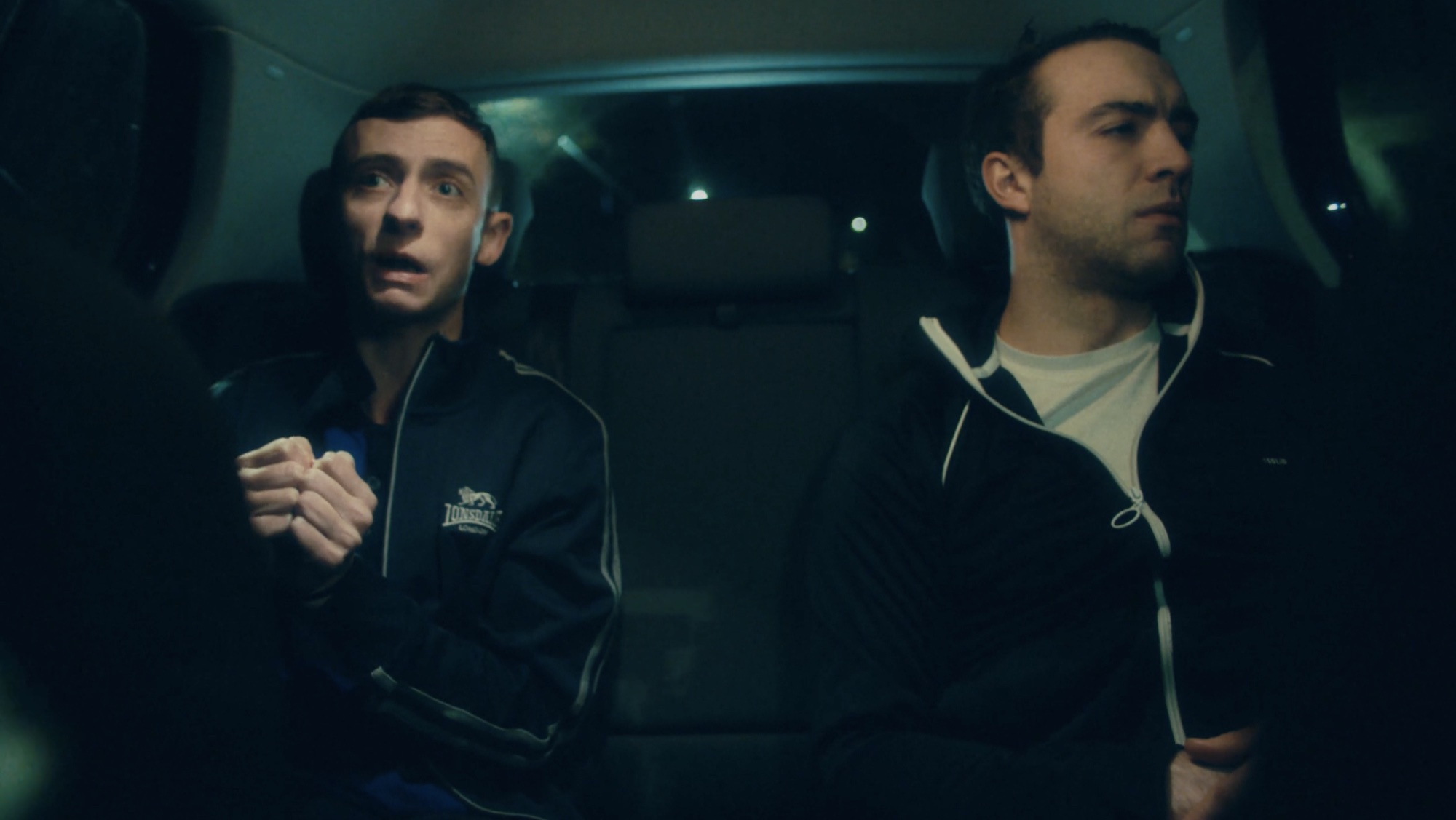 How straightforward was the post-production process for this?

Me and Owen edited the film, which involved totally restructuring it from what we initially imagined. There were scenes we loved when it was written down that just didn’t work, or didn’t feel vital, and there were new scenes which we had improvised on the day which made it in. The rhythm played an important role too, as we tried to get a sense of how the jump cuts worked.

This film portrays the emptiness of aggressive projected masculinity, the neuroses that propels it, and the shallow depths beneath it.

Early on we decided we didn’t want a score. The natural sounds would create the atmosphere. The car noises were the most important element, as it tells another story. The revs reflect Kieran’s state of mind, and as he spends almost the entire film off screen, the fast, slow, or erratic revs are integral for expanding his character. The grade was another big job, as we totally changed the colour palette that was filmed. There were lights in the car, but most of the light was coming from the street lamps which give off this horrible orange glow. I hate the overuse of orange and blue in films and I knew I wanted it totally changed. We instead focussed on white and green, to create a more unique look, which feels closer to how I perceive the streets of Cardiff at night.

How long did all of that take in addition to the writing and shooting?

We spent a few months writing it, then the one night shoot, and then a week editing it together in Owen’s living room. Then the pandemic happened, and the grade and audio process took nine months. The mixer couldn’t access his studio, and then when he could get in doing it remotely was a difficult process. Same with the grade. Both were doing it as favours, so they obviously had to prioritise paid work they were getting too. When people are helping you out you’re at the mercy of scheduling, and a global pandemic. 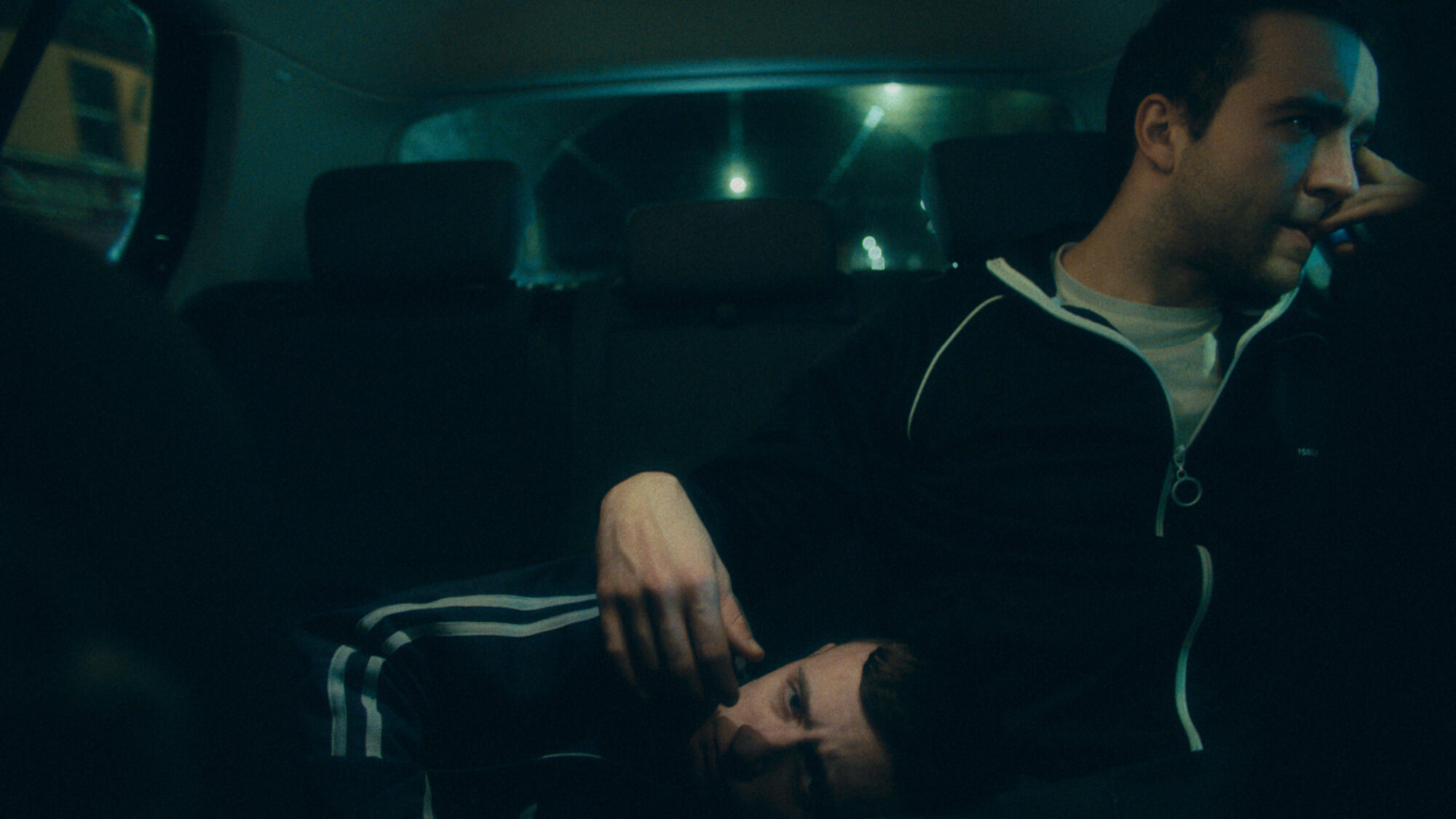 And last but not least, what do you have coming next?

We are in the process, with another Welsh filmmaker Oliver Gabe, of establishing SCYMRU: a production company born from our frustration at the lack of wild, honest, ugly, beautiful films coming from Wales. Face Down In The Back Of A Car is our first film, and there are many more to follow. Together we are working on the absurdist revenge short Mauled By A Dog. It’s set across one long night after a young woman has her face ripped off in an alleyway and follows her call centre worker boyfriend as he goes on a surreal journey through the underbelly of a South Wales Valleys town to take revenge on her attacker – a dog. If everything goes to plan, Mauled By A Dog will be shot at the beginning of next year.

Pig Eyes, my first feature as a writer/director, is in early development with Ffilm Cymru. The weirdo coming of age film follows Pig, a lonely teenager living in the remains of the most isolated town in the Valleys, which a decade earlier was destroyed by a mudslide, as he tries to find belonging in a group of violent teenagers.

I am also developing another feature with Owen and Ol, The Faceless Saint: a psychedelic medieval horror, which journeys into the grotesque, crazed, dirty, rotten and demonic vulgarity of 13th Century Wales during its conquest by England. Owen is also currently in post-production on his short film Arwel’s House, which was funded by the BBC and Ffilm Cymru, and has just started writing his follow up short.