I would most definitely call myself a fan of horror. Not particularly the kind that makes you jump out of your seat and spill your overpriced popcorn, nor the overly CGI’d monsters that we have become so accustomed to seeing, but more the deviant, morose and most importantly, grounded in the very real. With scare films written about practically everything imaginable, and many of those centred on the inconceivable, it’s always a treat to see something based in the relatable dread that can be found at home. Set up as the story of “a family therapy session which takes a disturbing turn”, writer/producer/actor Mark H. Rapaport’s directorial debut Andronicus makes good on the belief that we don’t need to look far beyond our immediate families or upbringings in order to find inspiration, even for the darkest of narratives. Sporting high quality production design and cinematography to match, DN is thrilled to host the online premiere of Andronicus alongside a conversation with Rapaport where we dig into the enjoyment he finds in making his audience uncomfortable and why despite advice to the contrary, he very much leaned into the film’s ‘long’ short running time.

Have you always been drawn to the dark and macabre?

I actually used to want to be a comedian. Right when I turned 18, I tried my hand at standup and did open mics and improv classes for a few years. I even interned with the writers at Late Night with Jimmy Fallon. It was quite a serious goal; I grew up on shows like The Simpsons, South Park and Curb Your Enthusiasm, and idolized their writers and creators. My jokes though were always on the darker side. I think I went for shock value more than anything. I enjoyed disturbing people and getting them to confront emotions out of their comfort zone. Then sometime in my early 20s, I found filmmaking. I found Fincher, Hitchcock, Yorgos, and others. I learned you can use filmmaking to make an audience even more uncomfortable than just being alone on stage with a mic. I also have grown to realize there’s a fine line between making people laugh and startling them. And now when I write I don’t really think too hard about the distinction between comedy and tragedy. Fear and laughter can be different reactions to the same thing, it just depends on the viewer and how they’re wired.

When I write I don’t really think too hard about the distinction between comedy and tragedy.

Where was Andronicus borne from?

Andronicus actually began as a feature film, one which I’d been writing for about three years prior. It had been a story I was toying with in my head ever since my own parents began their divorce in 2013. I think it took those years to properly process everything and write it down on paper with a fully clear mind. The entire production was a release of my childhood years. Complete euphoria is really the only way I can describe the feeling of being on that set. A full mental and emotional reckoning. The short is a re-structured version of the feature film’s climax, minus some cannibalism that unfortunately did not make it into the short version. 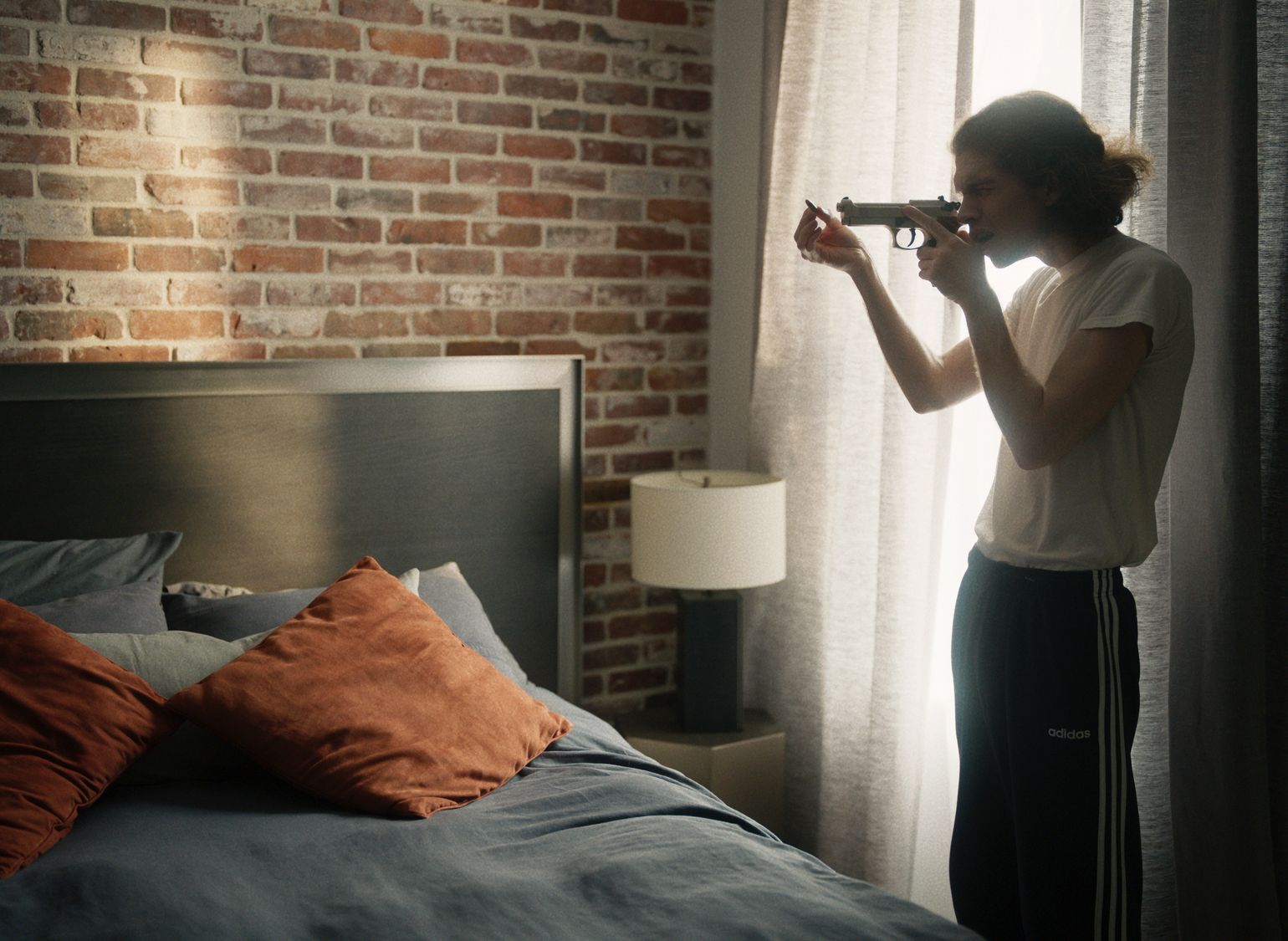 How did you find the process of restructuring a feature film, especially such a personal one, into a short?

It was challenging for sure as I didn’t want to lose my original intention. And so through many rewrites I distilled it to the essence of the piece: father vs. son enmeshed in a psychological/philosophical battle for the true meaning of family. It also helped that I restructured it as a ‘long’ short. I don’t think the film was ever going to be less than 20 minutes. Despite the cautioning of many, I made a conscious choice to limit my film festival reach with a longer runtime. Many festivals just won’t truly consider pieces over 20 minutes, but I wasn’t going to put a time limit on myself. That would kind of defeat the purpose of why I do what I do. God bless Fantasia, Brooklyn Horror, and you guys for seeing my piece as more than just its runtime. Maybe one day other festivals will take note and filmmakers won’t be scared away from making medium-length pieces.

Your cast is impressive and their portrayals gave me shivers, how did you bring everyone together?

I had put out separate casting calls for the Father and Mother characters. I was blown away by Eric Roberts’ taping. He was just so naturally charismatic in an unabashed, aggressive way that would make a mother feverish. And then there was the reader of the mother — when I heard her voice (offscreen) I thought: well we need both of them. The reader was Eric’s wife Eliza, and we cut a package deal for the talented duo. The icing on the cake was they could share an intimate scene during the pandemic without fear of contagions.

The other lead, Kimball Farley, I actually met in LA for coffee and immediately knew he would be perfect for this role. He just had this incredibly wild energy about him and a chaotic fire in his eyes. He is now my co-writer on a bunch of projects and part of my production company, Kinematics. The actress who plays the therapist, Rebecca Rapoport-Cole (not a relative but who knows) I also found through a casting. Like Eric, she simply knocked it out of the park. Her empathetic nature came across so strongly in her magnetic gaze. So convincing in fact that I was shocked to learn she was never actually a practicing therapist. Lastly, my cousin Brody played Young Simon. I knew it would be a logistical challenge to find a child actor, especially during COVID—but then I remembered: “Oh right, I have that charming nine-year-old cousin who is a natural performer and his mother won’t charge me too much.”

Despite the cautioning of many, I made a conscious choice to limit my film festival reach with a longer runtime.

The coloring of the film adds delectably to the theme, who did you work with on this?

I worked with the wonderful Ben Federman on color. Apart from being an excellent colorist he’s also a great dude with a really cute dog that I can pet during sessions. On the topic of color, it is always one of the most challenging aspects of post for me because it is so subjective and there are seemingly limitless ways to color a shot. It helped that Will Babcock (our DP) is a details fanatic.

Andronicus is very slick, can you go into some of the layers of production?

Only now in hindsight do I fully appreciate my DP’s insistence on shooting with a proper Fisher dolly. The locked-down, portrait-style photography we wanted simply could not have been achieved without it. Luckily the space was also big enough to properly handle one. We lucked out on a COVID deal on an amazingly spacious Upper West Side townhouse.

As far as the shooting went, I definitely feel like I settled in with each passing hour. I’d been a producer on set multiple times prior, but it was my first time at the helm. By the end I didn’t want to leave. I remember thinking “maybe we just add a few days and turn this thing into a feature.” Then I looked at my credit card bill and was brought back down to Earth.

I worked with the wickedly talented Nik Voytas on the edit. I was scared to see the rough cut—because that’s what everyone says. That you’ll hate the rough cut. And sorry Nik, but I kind of did…I remember thinking “shit, this isn’t how I imagined it! What the hell was I thinking??” But then of course you get in there and tweak and tweak and discuss with the editor the feelings each moment is trying to elicit. You argue a little. The editor comes up with some brilliant ideas you would have never thought of alone. And after a few months, and taking week-long breaks to get fresh eyes, you get to a place where you feel like the piece is saying exactly what you want to.

I didn’t really like school, but the best advice I ever got from a professor was that telling a story is like painting (or was it sculpting?) a face. Your first draft may have all the parts of the face the nose, the ears, the mouth but they’re all sort of jumbled. Like a Picasso painting. Your task is to arrange them so they look like the face in your head. The face you want the audience to remember.

Kenny Kusiak did the sound design and original score. The man is an all-around audio machine. His idea to put an old public domain song in the bar scene and then distort it was amongst his brilliant contributions.

We shot on the Arri Alexa Mini LF (large format) with Arri Signature Primes. This was yet another COVID deal we were able to swing. The large format is something I had never got to work with before. It is a truly astonishing camera with a sensor that allows you to get shots you never thought were possible. My DP could definitely explain better how that works. Something about the sensor size lets you capture wide shots with the depth of a field of a telephoto closeup. 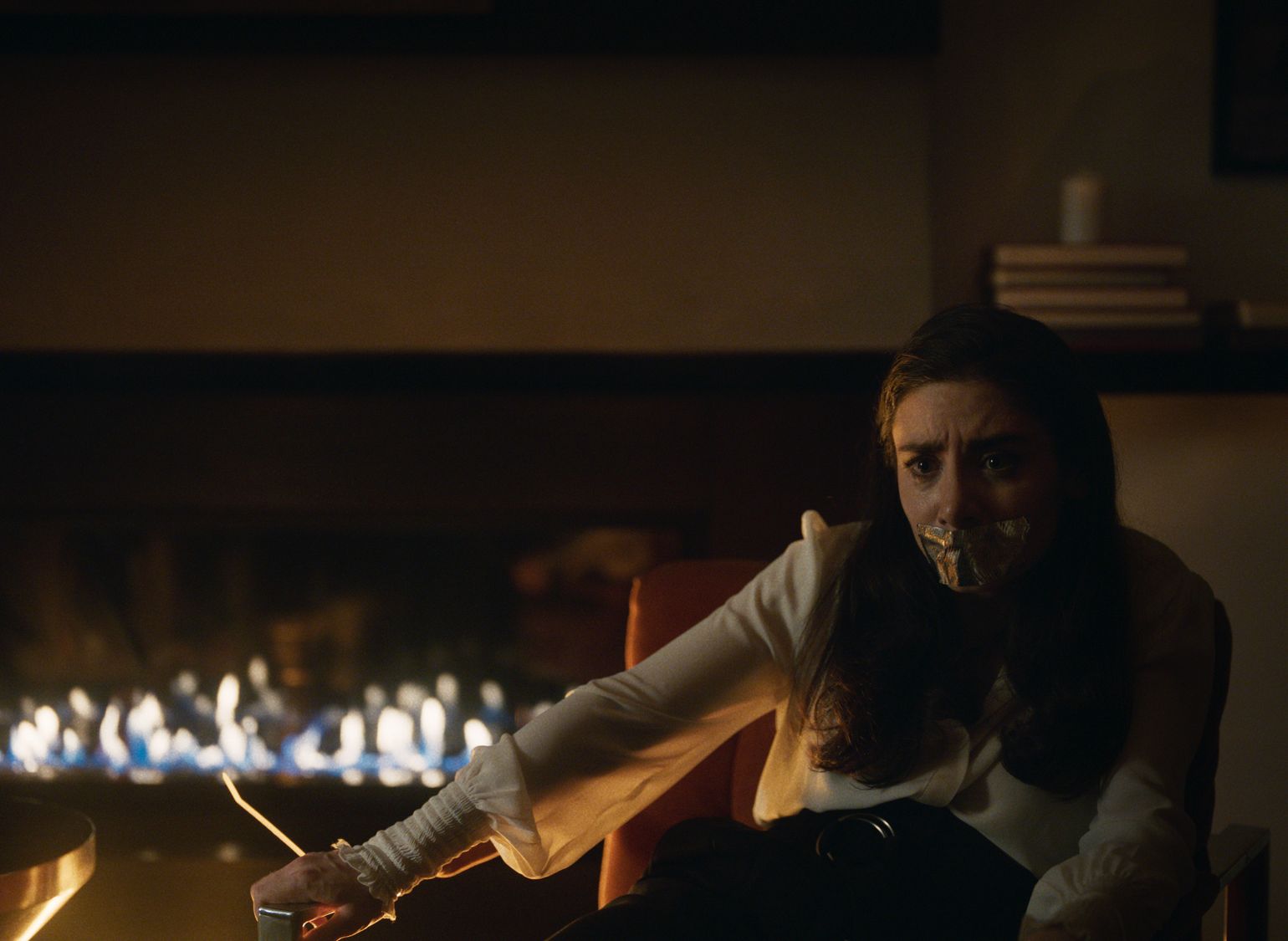 Was Fantasia always where you wanted to premiere Andronicus and what are your hopes for the film following today’s online premiere?

Yes. Fantasia has been a favorite ever since we world premiered Pledge there (a feature film I produced, directed by Daniel Robbins who also helped produce Andronicus). Based on the experience of that film, I knew Fantasia takes chances on provocative narratives – big thanks to Mitch Davis and his whole team for not being afraid to always push the envelope. For the online premiere, I just want it to find its audience. I think the film can appeal to people who have lived through divorce, but more broadly it’s a film about coping with trauma. It might be uncomfortable to sit through for some but that is exactly the goal. I want to make millions of people uncomfortable.

It might be uncomfortable to sit through for some but that is exactly the goal.

What can we expect to see next from you?

Next up is a feature film that I will hopefully be shooting this fall before the new year. It’s called Hippo and it’s a take on the Ancient Greek tragedy Hippolytus. It stars Andronicus actor Kimball Farley, who I also co-wrote the script with. It will also star Lilla Kizlinger, who won a Silver Bear at Berlin last year for her performance in the mesmerizing Hungarian film Forest — I See You Everywhere. Eliza Roberts from Andronicus will also be joining the cast. Will Babcock is shooting it as well, and we will be finishing the film in black & white. I also have another feature script that I am collaborating with Kimball on. It’s a horror/thriller/sci-fi feature set in the desert; I would say more but I don’t want to give anything away.