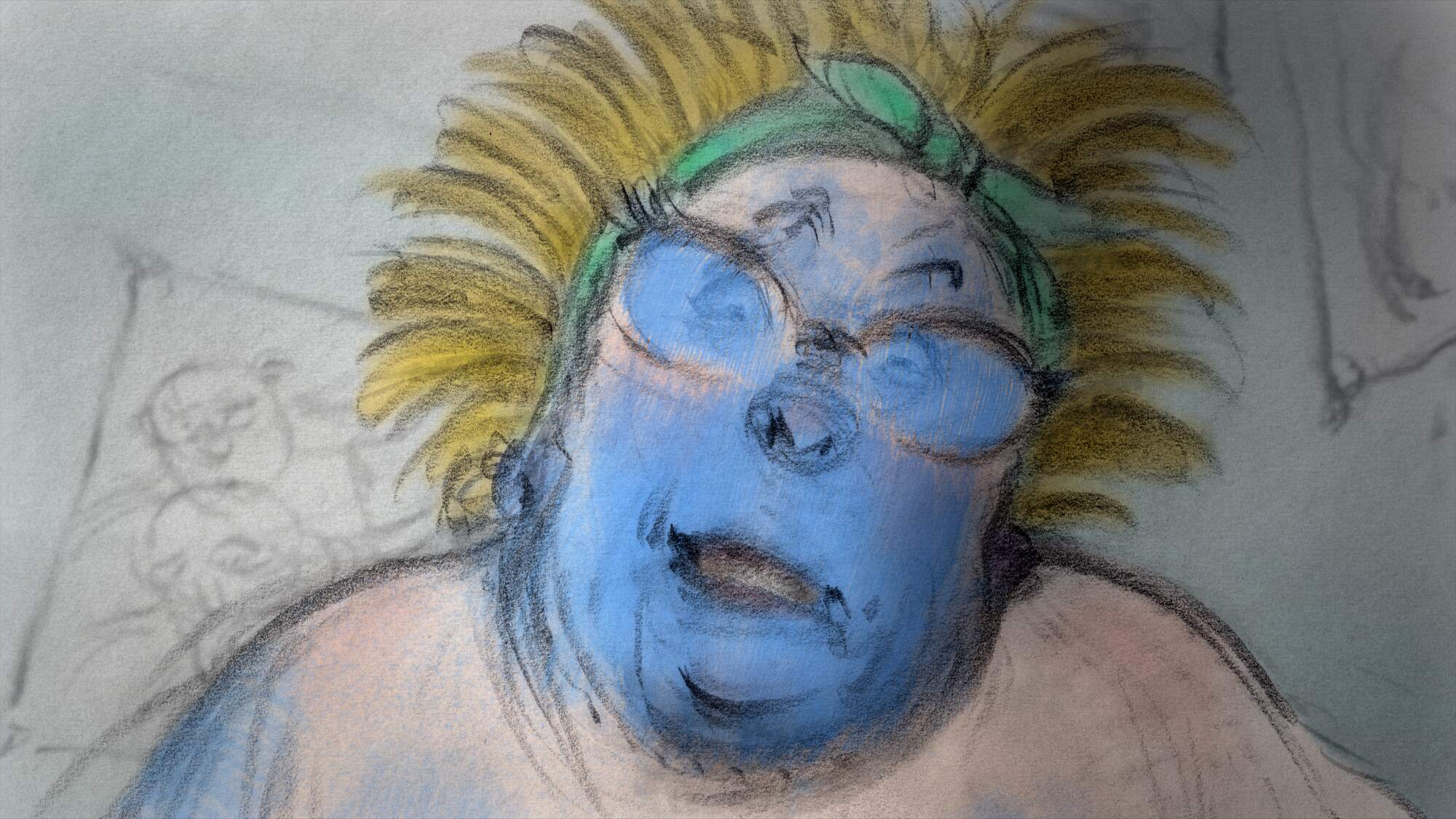 Joanna Quinn and Les Mills have been a creative partnership since their debut award-winning short Girls Night Out, a film which premiered in 1987 and picked up three accolades at Annecy International Animation Festival, the world’s most prestigious animation film festival. The film introduced the character of Beryl, a working-class heroine who is almost a direct subversion of your atypical Disney princess. She is bold, brash, adventurous and curvaceous but also anxious, insecure and constantly finding herself at the centre of bizarre antics. This honest relatability is what has kept animation die-hards returning to her time and time again. The latest iteration of the character, and her fourth appearance in Quinn and Mills’ filmography, is Affairs of the Art, a short film composed of a series of vignettes centring on Beryl and her family’s long-time peculiar relationship with obsessions. DN was lucky enough to ask Mills a few questions ahead of both the BAFTAs and Oscars, where the film has been shortlisted, to chat about the process of adapting autobiographical scenarios for the film, the richness he finds in observational humour, and the evolution of his 35 year working relationship with Quinn.

What keeps you both coming back to Beryl, as a character?

Beryl is a very well known and beloved character established in 1986. In many ways, she has qualities that are greatly underrepresented in mainstream as well as alternative animation. She’s the ‘wrong’ age, shape and vocation in terms of female representation. She really is an anti-heroine with very humble beginnings, working class, working in a factory but always seeking a challenge or a way out, a new avenue to explore, and audiences seem to warm to her. There is nothing remotely glamorous about Beryl; she’s definitely not a sex symbol. There are millions of ‘Beryls’ around in the world. Because of the long gap after the previous Beryl film, Dreams and Desires: Family Ties, people were begging us to do another Beryl film. So we did. Maybe Beryl will resurface again one day…

What inspired each of the family memories and scenarios featured in the film?

There is much biographical as well as autobiographical information feeding both characters and scenarios in Affairs of the Art. My older brother was the complete obsessive. His fixations are highlighted in Affairs of the Art through the character of Beryl’s son, Colin; e.g. railway signalling systems, screw threads, and anything Dutch. His vocation was designing the layouts and intricate piping systems for large chemical works. He was the one who rescued the pigeon and built the amazing pigeon coop featured in the film, but it was me who found the dead pigeon and made the crossbow – but never killed the cat! My brother is exactly the same now as he was as a child.

She has qualities that are greatly underrepresented in mainstream as well as alternative animation. She’s the ‘wrong’ age, shape and vocation in terms of female representation.

The deathbed scene featuring Beryl’s grandmother was based on both of our actual experiences of dying or dead grandmothers. I was alone as a young child in a room where my grandmother died in front of me, and Joanna examined her dying grandmother’s frail body as reference for an old naked woman she was animating in the film The Wife of Bath.

So much of the comedy and richness of Beryl’s family is observational, what drew you both to telling stories of small, human moments?

Both of us are very deliberate and constant observers of people, their relationships to others and their immediate environments. Some of the characters in Affairs of the Art come from acute childhood memories of growing up and dealing with childhood ambitions, as well as personal obsessions. There is as much darkness in childhood experiences as there is lightness, and exploring indelible as well as traumatic moments in one’s own background affects the stories you tell. When we teach, we sometimes remind students to think of and call on their own childhood experiences, which are often very richly layered, humorous or even tragic.

How would you describe the collaboration process between the both of you? You’re labelled as having separate roles but do you ever find that there’s overlap in how you approach creating animation?

We are a very long-established and extremely close partnership. We’ve been working together since we first collaborated in 1986 on Joanna’s graduation film, Girls Night Out. It helped because prior to that, I had taught Joanna drawing, and she in turn initiated me into the wonders of the animation processes, so much so that I ended up teaching very basic exploratory animation to graphic design students at Middlesex University in London. I am not an animator; my background is fine art and documentary film. Basically, I taught the students how to liberate their ideas and explore the creative possibilities of animation in the widest possible senses, without fear. My mantra was, “Just do it: open your minds, explore.” 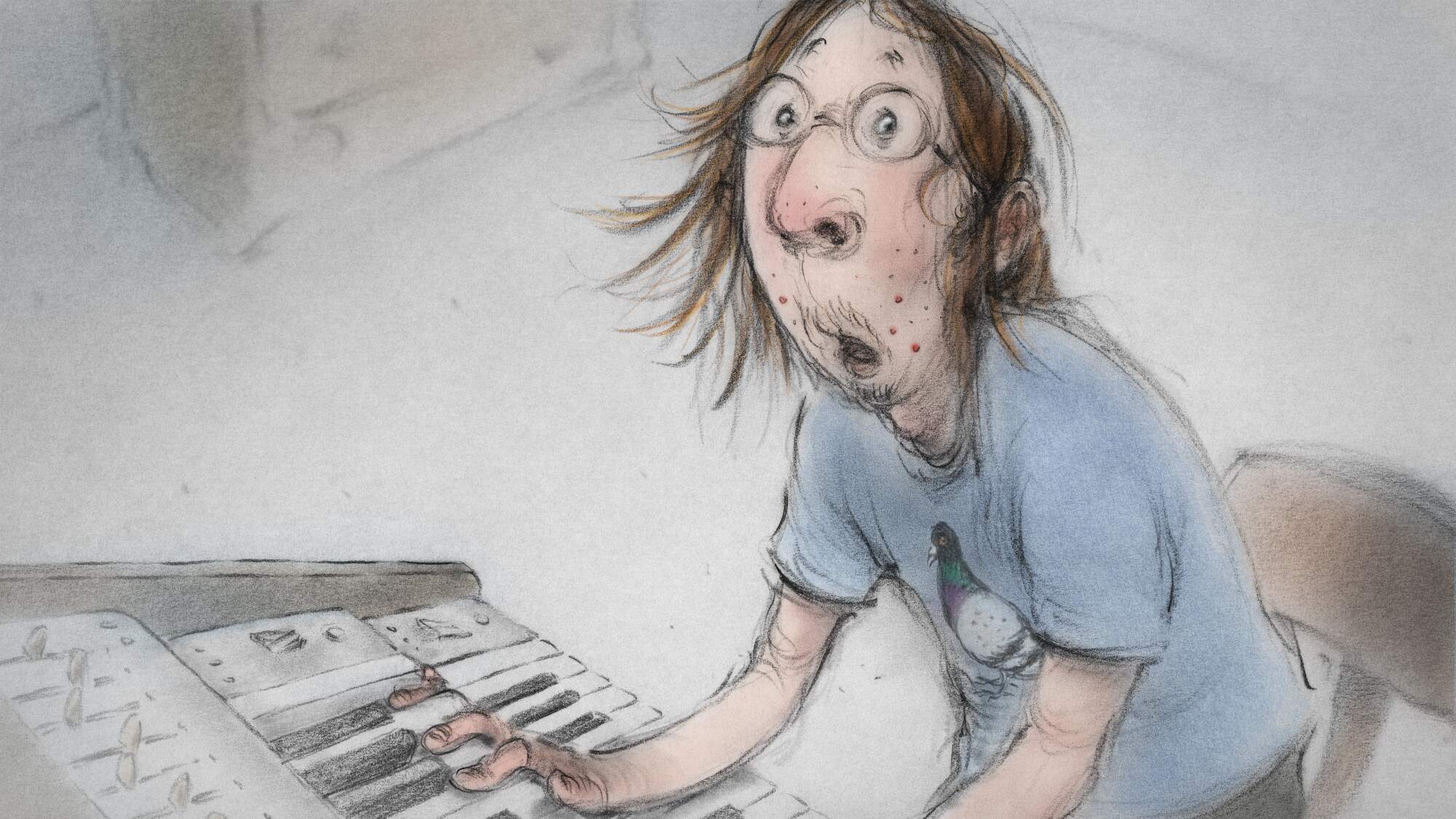 Joanna, of course, is the consummate animator. She eats, drinks and sleeps animation. Her skills and animation technique are intuitive and natural, and she enjoys the act of thinking through drawing. However, as previously said, we are both great observers of people and their habits and behaviour patterns, and of course we both love telling stories, Joanna by talking and drawing and me by talking and writing short stories. I love history and doing research. It was my favourite subject in grammar school, and I watch documentary films endlessly. That’s why there are historical references in Affairs of the Art and the previous film, Dreams and Desires: Family Ties. Joanna enjoys listening in on conversations and summing up character and human reactions through drawing, she never stops. Somehow the combination works itself out in our movies. I write incredibly detailed character profiles, which often form the basis for later drawn characters occupying our films. We can both identify each other’s strengths and weaknesses and rely on each other’s co-operation in all the production stages of putting a film together.

Exploring indelible as well as traumatic moments in one’s own background affects the stories you tell.

How long did it take to make Affairs of the Art from those first few ideas to the final edit?

Six years of actual production and many years of refining the script to the completed storyboard and animatic. We spent about thirteen years doing television commercials for North America, Canada, Mexico and Europe, a very big campaign with Publicis for Charmin toilet paper, and also commercials for Whiskas cat food, Nips candy and United Airlines. We used the money we made from these campaigns to establish our own production fund, which is how we mainly funded Affairs of the Art.

We can both identify each other’s strengths and weaknesses and rely on each other’s co-operation in all the production stages of putting a film together.

Has your production process evolved through the years?

Yes, it has evolved, taking on more young, talented production staff, and investing in new computers and software, although we still create original artwork the traditional way by animating with pencil on paper. The drawings are scanned into the computer and coloured digitally and composited by very talented, savvy and skilful operators.

You’ve both obviously had extensive careers in animation at this point but did you learn anything new in making Affairs of the Art that you’ll be taking into future projects?

Yes, the production process was way too long for various ‘life’ reasons, which meant that we really didn’t start the full production process until 2016, although the script and storyboard were completed long before that. We will pay more attention to setting strict deadlines for all stages of the production in the future, the kind of deadlines we followed when we were producing TV commercials in the past.

Speaking of, what can we expect from you both next?

Something very short and dynamic to begin with, perhaps a new and very different Beryl film, or another political short concentrating on the dynamic drawing skills of Joanna as evidenced in one of our previous films, Britannia.