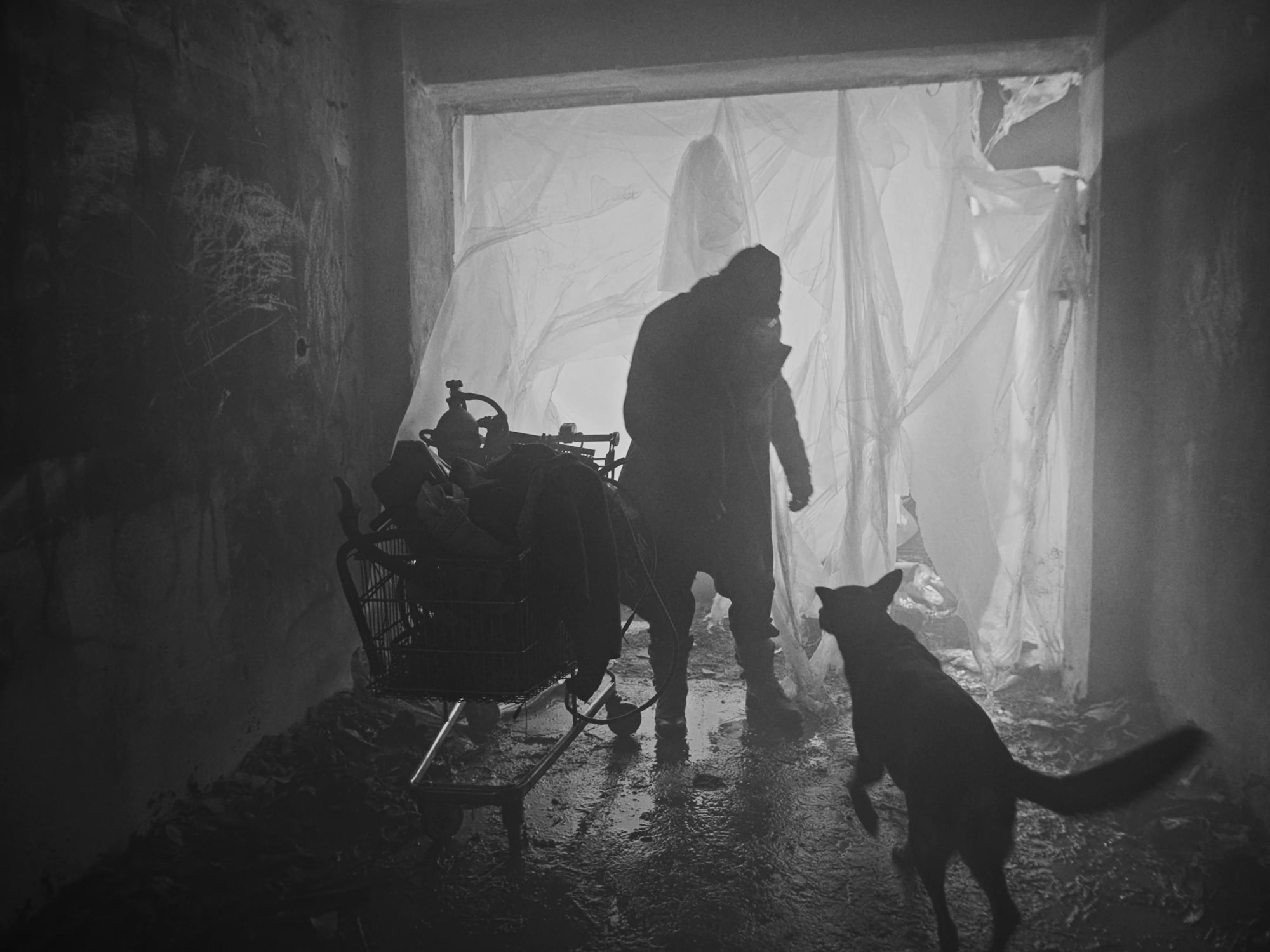 War, destruction and the terrifying threat of annihilation is on half of Eastern Europe’s mind right now, with Russian barbarity in Ukraine threatening to spill over its borders. It’s a very interesting subject for a rap video to tackle and one which Director Krzysztof Skonieczny (under his alias Tektonika alongside contributions from Jerzyk Krzyżyk and Alick) does so with aplomb, using an unorthodox slow cinema approach that feels more indebted to the classical cinema of Béla Tarr, Andrei Tarkovsky and Aleksei German Sr than contemporary rap music videos. Set in a crumbling building on the verge of a hostile takeover, Peru48 uses epic Steadicam takes to create an overburdening and oppressive atmosphere, resulting in a moody depiction of a world about to crumble completely. We asked Skonieczny to tell DN about being inspired by slow cinema legends and the architecture of Moscow, the challenges involved in getting the long takes right, and how it all relates to the myth of Sisyphus.

I’d love to know more about Tektonika — this is your own music project?

It’s my experimental rap project. I also starred in my HBO series Blinded By The Lights as a rap character named Piorun. It went viral. So I recorded a few tracks as Piorun. But I didn’t want to impersonate the film character so I invented Tektonika, who is more diverse and more interdisciplinary. I also can speak with my own voice. I record with artists within my own label and production company that I like. We recorded this track in a studio in the countryside near the German border. These rap artists are actually placed on the wall in the video, so it’s a small hint to our presence there. The other guys compose very diverse music, but also wanted to devote themselves to rap, so that’s how we pulled it off.

I wanted to portray was a man who was in purgatory. We don’t know if it’s a distant past or a dystopian future.

Where did you get the idea for this setting? It’s quite unorthodox for a rap video.

I think that was a matter of two things. The lyrics are more or less about what we see on the screen but in a metaphorical way. The subject is about being stuck in time, being stuck in the moment, that you cannot move on from again. The thing I wanted to portray was a man who was in purgatory. We don’t know if it’s a distant past or a dystopian future. We have the idea, like in a computer game or a merry-go-round thing, that he wakes up every day and wants to commit suicide and make a big explosion. The other thing was to play tribute to Béla Tarr, so I just connected it all in a strange way in my head. 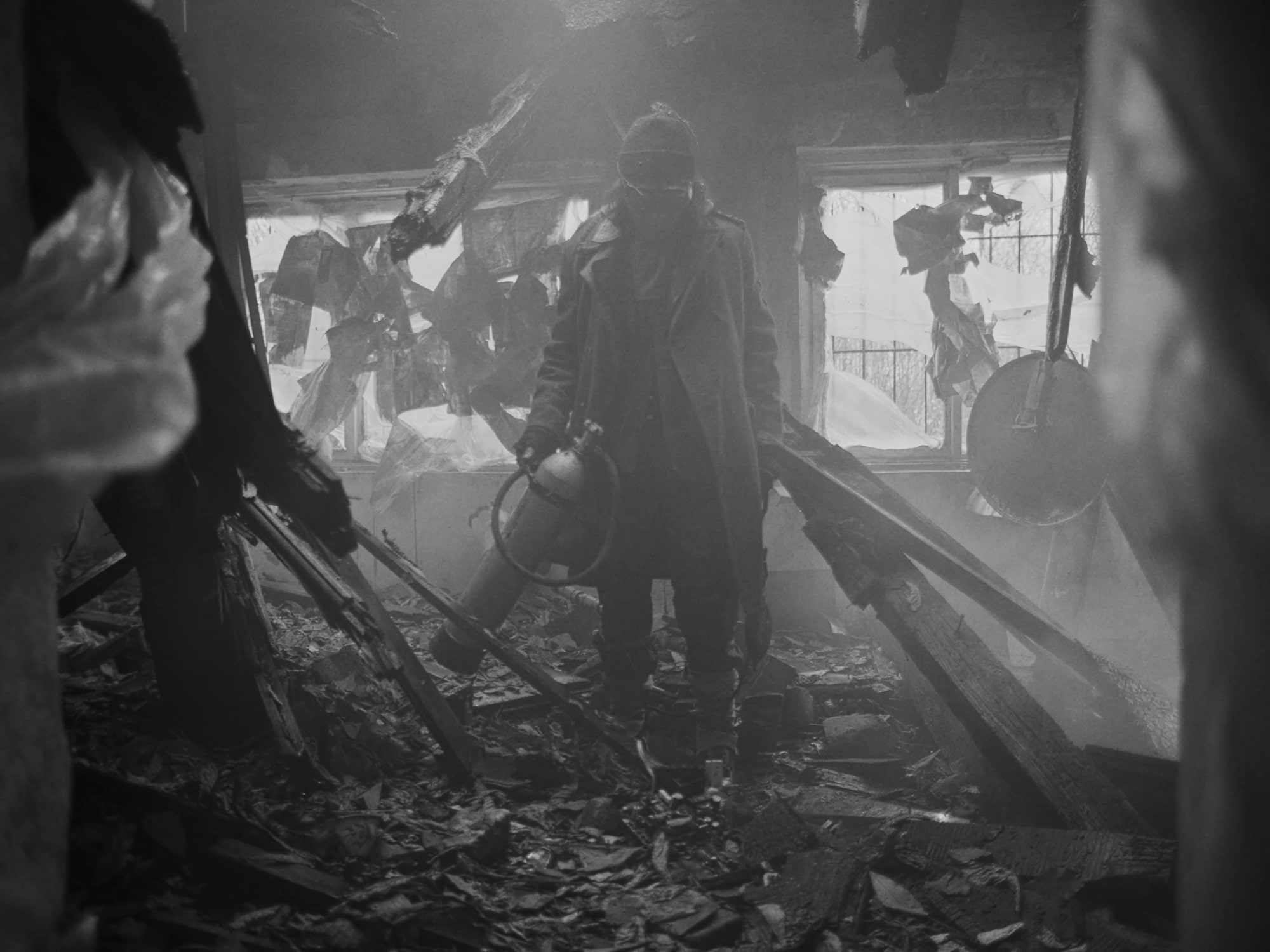 Yeah, I jotted Béla Tarr down. Do you also know Aleksei German Sr. and Hard to be a God?

I thought about this movie. Some time ago I was running a discussion film club and I showed this movie over there. Actually, this movie was being created for like 52 years or something so it’s kind of like being stuck in the movie for half a century, for most of your life. Then at the end, German Sr. died ten months before the premiere at Rome Film Festival. I came to this knowledge and probably connected that with this Béla Tarr stuff.

And the main characteristic of slow cinema is the use of long takes. Your film appears to be one take, but there seem to be some transitions… tell me how you worked on it?

Actually, I wanted to make one long take but the architecture of the place didn’t allow us to do so. So there are four cuts because the spaces of the music video are on different floors. But we wanted to make it in a smooth way. We also wanted to make this feeling that when you are stuck in the moment it doesn’t matter if you teleport or you move or you do a jump-cut because you are so used to that, you can appear in different spaces instantly. We wanted to make it more hyper-realistic. There are one or two points that even emphasise that, that make you a little dizzy.

We visited a lot of places within and around Warsaw. This place was actually ready-made and also reminded me a little of Tarkovsky’s Stalker, but in a war way. We shot it before the war in Ukraine and the aggression of Russia but the intuition was that there should be something with an eastern Slavic soul in it. That you cannot move on because of your past. That’s why there are some objects and props from this man’s past. For me, it’s a metaphor for Eastern Europe. This place was the personification of the feeling from the images that we were fed from Donbass or the Middle East. It can be a metaphor that you have to fight for your own space and for your own ideas until the very end. The idea was that you are a winner if you survive one more day. So we were improvising around this topic with the space and the camera movement and the 4:3 aspect ratio, so the character is kind of like a prisoner in this space.

Getting down to nuts and bolts, what kind of tech did you use to achieve this?

It was a Steadicam with an Alexa Mini on it and some vintage lenses. We did a proper grading, being inspired by Béla Tarr, like Sátántangó, Werckmeister Harmonies and The Turin Horse. Visually, it was this kind of simple bunch of tricks or classic stuff that we used. We wanted to be quite noble, quite simple, and very old-school. Paying tribute to classic movies of cinema, like Béla Tarr did.

The war in Ukraine has lingered over a lot of shorts made in the last few months, but your film veers into sci-fi by the end! I’d love to know more about the last shot and the software needed to pull it off?

For me, this man resists surrendering to time and the enemy so this searchlight or spaceship that is killing everything around is just the personification of an enemy. Our main character wears a suicide vest, and you think when he puts it on the table, he is a kind of terrorist or whatever. Then we look outside the window with him and see everything is destroyed. So there is kind of a paradox. But I think the idea behind it was that everything is so destroyed around us, that not making a contribution, not destroying more, is actually a win. Not making an action is actually the biggest action you can do. It wasn’t so much from outer space, maybe more from a dystopian retro sci-fi thing, but it was more a personification of the enemy.

It was CGI. We put markers on a frame outside the window. And then a CGI friend of mine created all of it in 3D, to make a dystopian city. We can see in the background that the city is a little bit Warsaw, a little bit European, a little bit American cities like L.A. or New York. But it’s more of a universal city, like being on a different planet. I wanted to make a feeling like on my visit to Moscow, where they have these palaces of culture: the Seven Sisters. I was looking outside my window and spotted many of them. I felt like I was on a different planet or being out in space. So I wanted the CGI shot to create something familiar but also the repetition of humanity on a different planet. But we destroyed it. So you are in existentialism, like the myth of Sisyphus: you are climbing with a rock up the hill and then it drops, and you have to do it again and again and again.

We wanted to be quite noble, quite simple, and very old-school. Paying tribute to classic movies of cinema.

What are you working on next? You mentioned over email that you are looking for state funding for a feature?

Like West Side Story or more of a Polish take on material?

It’s gonna be like when you connect Euphoria with La Haine and the movies of Tony Gatlif.