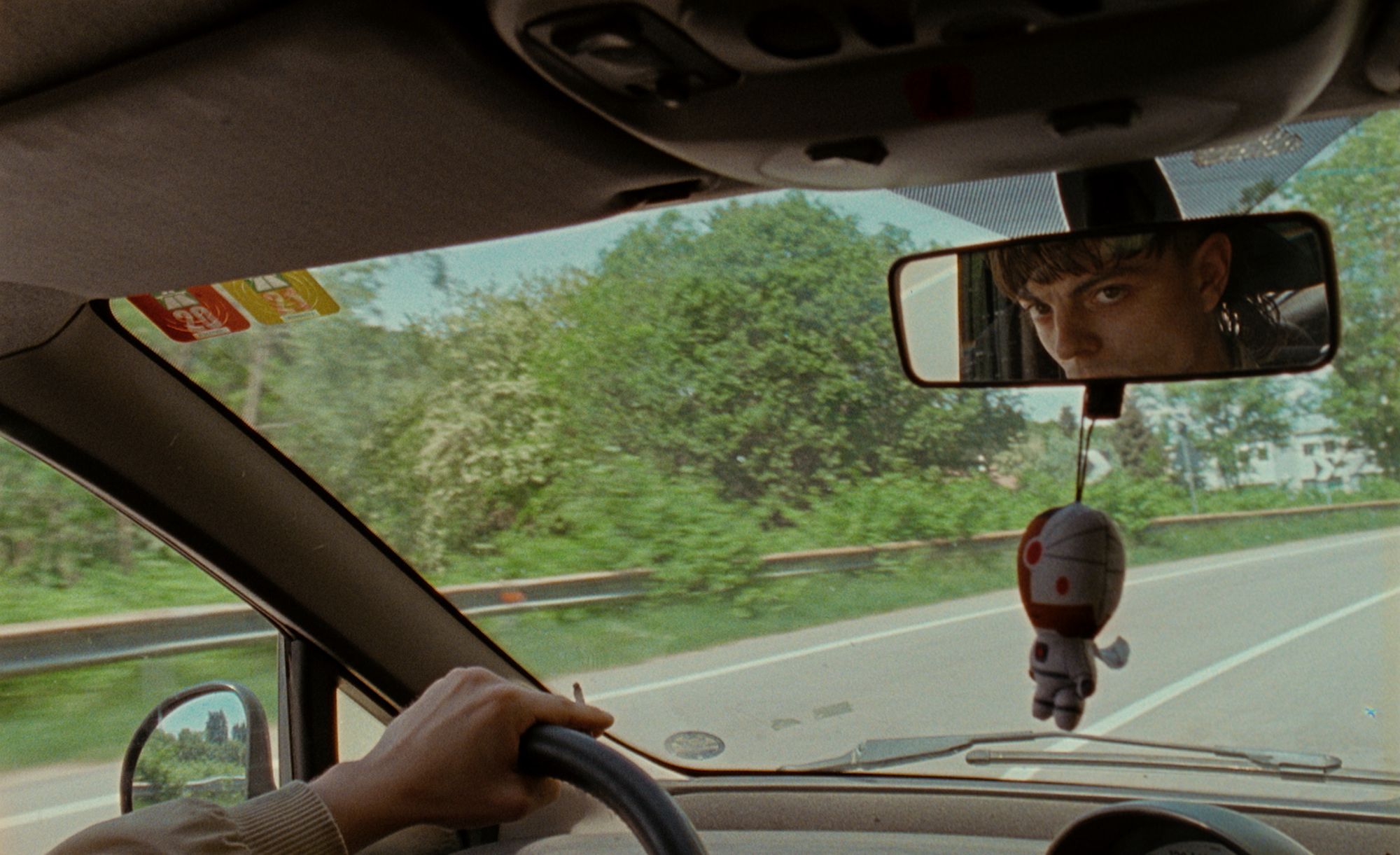 When Italian director Giada Bossi met artist and musician Arssalendo at a branded content shoot they were immediately drawn to each other and through a mutual appreciation of each other’s work, tastes, sensibilities and references, quickly decided that they wanted to collaborate on a project. Through this, Quattro Pareti was imagined as an exploration of the painful theme of loss, grief and mourning, focusing on the young age where such concepts are still impossible to grasp entirely. Bossi, who studied filmmaking in Milan and has worked in the world of music videos, fashion films and advertising, wanted to create a crossover between the language of short film and music videos, merging the two. In the film she explores being suddenly forced to deal with an adult world and the merciless flow of life from a child’s point of view, focussing on the struggles of comprehending loss. Quattro Pareti immerses us into the beats and winding paths of Arssalendo’s music as we follow a contemporary fairytale filmed in the surroundings of Bossi’s childhood home. We spoke to the vibrant Italian director about weaving the fundamental dynamics of the music into a narrative, the difficulty of finding a young actor who could match the sheer weight of emotion required by the role and how she was able to work so intimately with Arssalendo who also brought a flawless performance to the film.

How did you progress from the initial connection with Arssalendo to writing and directing your film?

Quattro Pareti is a true passion project between Arssalendo and my team. After meeting and sharing such a raw connection I was inspired by a line from his latest EP – “In the long run, everything dies, your dog as well.” which just happened to bring me back to a line from one of my favourite poems by Raymond Carver, Your Dog Dies. I decided to delve into a narrative exploration of loss and mourning, particularly at an age where one doesn’t have the tools to explore such emotions.

I have a beautiful long-term working relationship with my co-writer Tobia Rossi who wholeheartedly dove into this project with me. I feel blessed for having his sensible soul and meticulous enthusiasm next to me and he’s constantly telling me that “there’s not just one way to write a good story: write an ugly one, then fix it” – which we did a lot of until we were happy with it. We shared the idea at different stages with Arssalendo alongside Filippo Patelli, the editor, and Francesca Pavoni, the director of photography, my trusted and scrupulous team. Having them read and discuss the narrative was fundamental to me, and getting feedback from their perspectives opened us up to new points to fix and rework. It was Arssalendo who wanted to take on the role of the older brother and I am still impressed by the commitment he showed.

This is actually the most challenging project I have ever done, concerning various problems we needed to overcome. The project was very ambitious for the money we had, and I’m still grateful to the whole team as shooting narrative pieces is very complex, you need to take care of many macro and micro details for continuity and to make the story work. 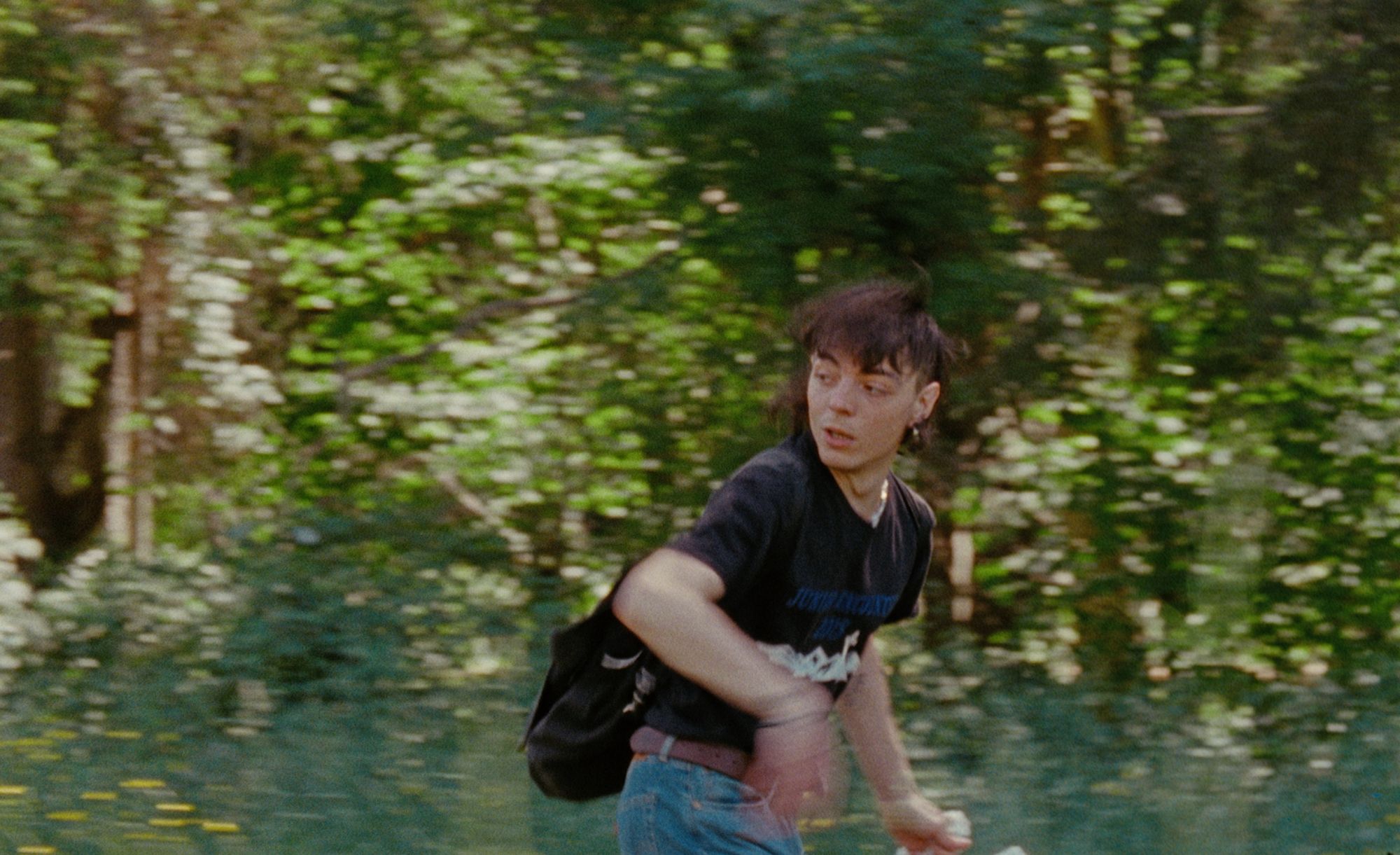 The music weaves seamlessly into the story. How did you decide on the right amount of dialogue to merge the worlds of music video and narrative short film?

I always had the track mood and structure in my mind, it already had some solid variation of pace which is something I always look for when I consider tracks for music videos. The music’s dynamic is fundamental, and the images need to match it which could be just underlining the same mood or contrast, but the dialogue music-image needs to be there. While drafting the script, we knew that there was a more vibrant mood in the beginning, then a more sombre moment later on which were naturally creative stakes, and our writing needed to fit them.

He took the opportunity to rework a series of sounds, to create an ad hoc soundtrack.

Very quickly, Tobia, Filippo, and I quickly realized that the story needed more time than the track’s duration which is the cool thing about working directly with the artist: Arssalendo (Allesandro) was super up for reworking the music for our needs, so the version in the video is not the EP version. He took the opportunity to rework a series of sounds, to create an ad hoc soundtrack – and not simply to edit the playback over the images. We decided together where it needed to be longer, what to extend, and where to stop it. This kind of cooperation is priceless.

Can you go into more detail about the images that came to you from the music and how you then went about building the narrative?

“I basically do sad music, with pop melodies and tons of distortions”, is how Alessandro described his work the first time we met, making me smile. That’s quite a good description of the kind of music I’ve always liked. The music clicked with me the second I listened to it, the sonorities, the mood. I love to listen to music on the bus (which are the same ones you see in the film) when I go from Milan back to my parents’ place where we shot the film.

The first scene when they went to the veterinarian came out quite naturally. It is the first image that came to my mind. I liked the idea of stillness there while the music explodes and just a tiny part of the screen, out of the window, being seamless with the music. We worked in a very ‘classical screenplay’ way but always kept in mind the timing of the music as narrative points. We didn’t do a storyboard but we accomplished extremely specific scouting, shooting all the frames with Francesca, the director of photography, and Jo, the head gaffer playing the two actors. 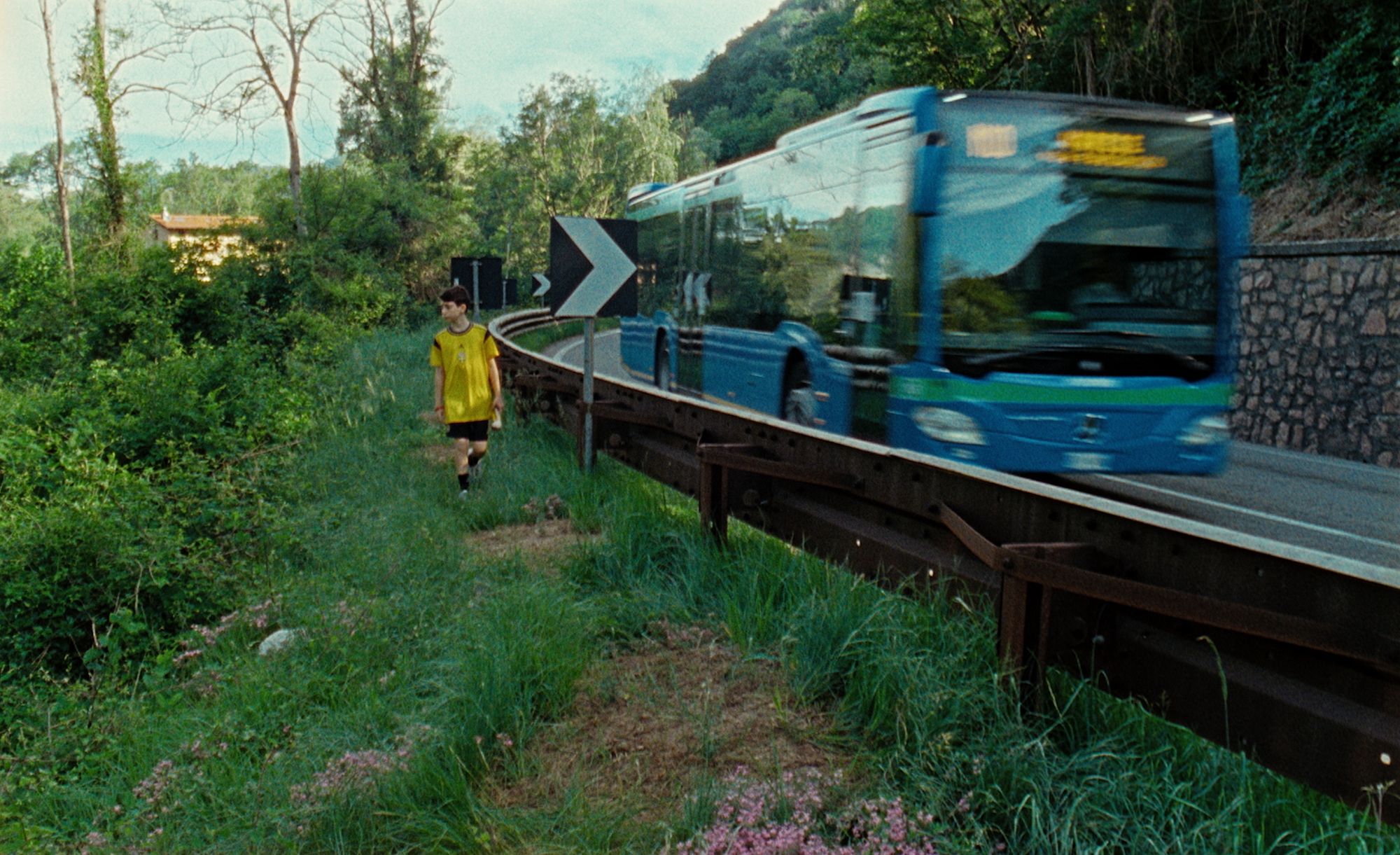 It’s a very weighty role to take on for an actor, particularly one of a younger age. Was casting a challenge for you?

Finding Giulio Vaccaro who plays Samu was game-changing for this project. The casting was very long as we needed an eleven-year-old kid capable of acting in a challenging role with so many sides to the character development. We performed a super wide casting, looking in Milan and Rome but all the kids coming from agencies weren’t working. In the end, we found a theatre school in Affori Milan where Valeria Pini works as a teacher doing a fantastic job with young teenagers. She pushes them to approach acting in a complex and mature way, talking about the character’s intentions and desires which is where I found Giulio. He is intelligent, a hard worker, observant, quiet, and totally professional – unique. He kept surprising us right up until the end of the shoot with his persistence and dedication.

Did Alessandro have a background in acting before this and how did you feel directing him in a project he was so intimately involved in creating?

He doesn’t have any acting background at all. It is still hard to believe for me, as he was that good. Working with an artist more broadly is compelling. I always loved Alessandro’s presence and face, but I was a bit shy asking him to perform as an actor as I didn’t want to force him to do that. But he was enthusiastic and felt comfortable with just one condition, he didn’t want to speak. So, we found a way to make the story work without him talking.

When you work on deep and delicate scenes, it is necessary to face them as soon as possible without uncertainty or taboos.

I was surprised by the complicity that was suddenly born between Alessandro and Giulio. They were very aligned and very focused on the characters’ intentions and desires and on how any single gesture should be faithful to that. I did some rehearsals before shooting with them which was fundamental. Most of the time, we didn’t shoot chronologically, so taking the time to go through the script linearly, analyzing scene by scene and the arc of the overall piece, was necessary. If you go deep in preparation then you can shuffle the scenes while shooting. 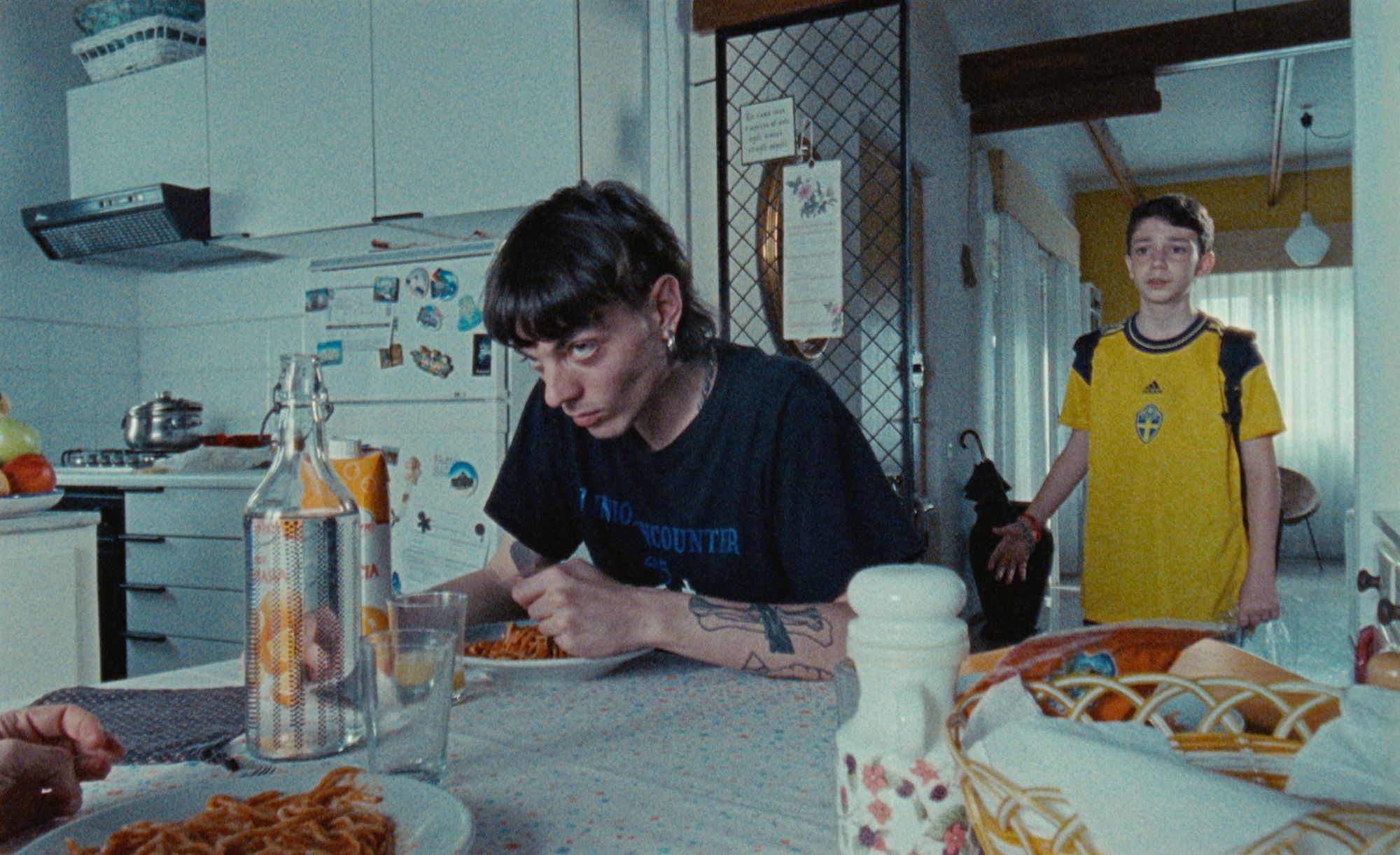 I like to break the ice very quickly so as soon as we met, I made them start to rehearse very quickly so they got to know each other while acting. When you work on deep and delicate scenes, it is necessary to face them as soon as possible without uncertainty or taboos. Be transparent and direct about what the point of the story is, and start to work on it straightforwardly. Otherwise, it becomes something scary. Both of them were really great in taking my feedback and bringing ideas in. Also, they were surprisingly careful with details of continuity, and they were basically my script supervisors during the film.

Why did you decide to shoot on 16mm and what cameras did you use?

We were looking for a way to capture this dreamy feeling under the bright sun we knew we would have. At the same time, it needed to be vibrant and concrete, particularly for the interactions with the dog, as I wanted the viewer to see it clearly and sharp. Shooting in 16mm nowadays is a luxury. I found that for a while everyone was shooting on 16mm and there wasn’t anywhere but we were helped by Illmatic film group for our technical equipment – it wouldn’t have been sustainable without their support.

That’s the best thing you can do as a director: surround yourself with people you can delegate things to so you have time and space to concentrate on the script.

Shooting on 16mm and on film, in general, gives you another pace and another perception of priorities. Keeping a natural light that makes the greens of nature bloom around the protagonists. You need to prepare it very carefully, and you cannot waste time on b-roll or doing the same scene a thousand times. For this project I thought it was the right thing to do – with a setting sun, you can really achieve another level of vibrancy. I knew I wanted to keep a very natural and realistic color correction on top of it, to tell this ‘dark tale’ in a very clear, realistic, and in-your-face look.

Francesca decided on using an Arriflex 416 HS, I totally trust her and we discussed the look and the result we wanted to achieve, the kind of lenses, and the sizes. But after that, I totally relied on her technical composition and her taste. And that’s the best thing you can do as a director: surround yourself with people you can delegate things to so you have time and space to concentrate on the script and the thousand other problems that will inevitably arise.

I’m still living my life short bouts at a time! Advertising pays my bills and can also be fun but I need to keep working on my personal projects at different levels. I’m in the development of my first feature with an Italian production company, also written with Tobia. Together we’re working a lot on short film scripts and music videos, these are exciting times!