The Scent of Seth – Anita Shukla 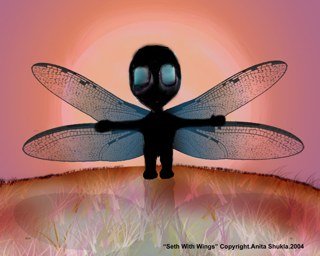 In partial homage to the sensation of dark imagination in the work of Tim Hope, Roman Dirge and Tim Burton, Anita Shukla’s animated short The Scent of Seth portrays beauty and charm in a twisted environment, with its take on the isolation and misery of adolescence and the desire to escape from it.

Produced over a three month period for her final MA project, Shukla was determined to experiment and master as many techniques and software packages as possible. “A lot of my time was spent doing technical research; I was determined to get a 3D look through a 2D technique. I wanted tone and texture and I also wanted to avoid a flat look to the film, so by using After Effects, (which I learnt from scratch) Photoshop, Final Cut Pro and having no sleep, I managed to pull off the result I had hoped for.”

As the animation was based on a poem whose lead protagonist is Death (renamed Seth), Shukla literally began at the drawing board, searching for existing character illustrations of the well-known Death character. Wanting to avoid stereotypical representations, she used these existing illustrations as inspiration and began creating rough sketches of Seth, focusing on his facial characteristics, costume and colour. Rough sketches of both characters were then scanned and manipulated in Photoshop for colour and texture tests. Once the tests were complete, Shukla hit her first hurdle – not being able to find a 2D animation package that allowed airbrushing frame by frame. Tests in Toon Boom were disappointing, as the software was unable to give Shukla the 2D/3D look she wanted, so eventually it was conceded that to only way to achieve the effect was by the time-consuming technique of colouring each frame individually in Photoshop.

When it came to creating the actual animation, frames were hand drawn, captured through a digital stills camera (with care taken to pick up the strong pencil lines) and imported into Photoshop for colouring/cleanups. Photoshop was also used to create a transparent background for each frame, before importing the sequence into After Effects. These sequences were combined with backgrounds for which Shukla animated hue and saturation to further grab an audience’s attention, before the final edit in Final Cut Pro.

With the animation complete Shukla began work on the soundtrack, searching for a narrator with a child-like voice who could deliver the poem in an adult manner. Once found, the narrator’s voice was manipulated and the speed slightly reduced to give it an alien-like quality. Instruments for the score, also arranged by Shukla, were recorded separately onto minidisc and then constructed in Digital Performer and Peak. Despite, or because of, a summer spent with no sleep and little beer, The Scent of Seth earned Shukla a Distinction and three nominations at the Halloween Shorts Film Festival. Shukla is in the process of launching an animation/film production company with a friend while continuing to work on personal projects.

Watch The Scent of Seth on BBC Film Network.