I realise you’re still waiting to hear about just what I’ve been seeing and who I’ve been talking to at SXSW this year – [excuse] I’ve been busy with screenings and parties and interviews, have pity. However, whilst you’re waiting I can tell you that tonight I got to see a great shorts double bill from two of DN’s favourite directors; Harmony Korine and Park Chan-wook.

You’ll already know that we’ve been strongly anticipating Park’s life and death themed, iPhone 4 shot Paranmanjang. Its strong visuals and messages from beyond were as captivating as we’d hoped, but I have to admit that I was mainly geared up to see what the combo of Korine and Ninja & Yo-Landi Vi$$er from the South African rap/rave trio Die Antwoord would yield. What we get is 16 minutes of a Trash Humpers like roll (Ninja & Yo-Landi spend the majority of the film wheelchair bound) through the woods and car parks of an unnamed South African city, as the duo attempt to increase their rep by upgrading their wheels and brandishing the machine guns of the title (Umshini Wam translates as ‘Bring me my machine gun’). 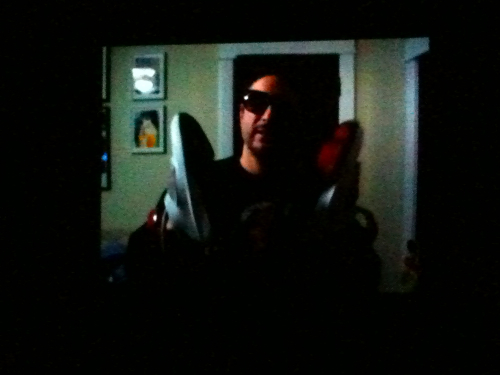 Unable to introduce Umshini Wam in person, a pre-recorded Korine joined us with odd trainers on his hands to set up the “shot on 14 continents, with a budget of millions” short, which turned out to be a perfect introduction to a film that never took itself too seriously and was fully aware of its blinged up ridiculousness; even the titles were fully pimped out.

Immediately after the screening VBS.TV posted Umshini Wam to their site where it will remain for a week before finding a permanent home at www.umshiniwam.com.