We live in a culture of gimmicks, very often in the Entertainment industry certain visual trends or camera techniques are brought to the forefront by a widely resonating piece of art that then becomes taken and reused, recycled by other artists without contextual meaning or representation. It’s still staggering how many film students will cite Wes Anderson as influence only due to the director’s use of visual symmetry without a narrative underpinning. Director Andy McCallie is not one of these artists. McCallie’s use of the one-take and analogue cinematography feels embedded in the message of writer and performer Chris Robertson’s monologue for Freedom Song, a spoken word performance Robertson performed at his school. McCallie’s visual artistry synergises with Robertson’s words to create a powerful symbiosis of sonic and visual mediums. DN is very proud to be premiering this short online and spoke to McCallie about the creative and practical decisions that went into making this film.

How did this collaboration between you and Chris begin?

I met Chris a few weeks before the Freedom Song shoot when I was working on a separate project at his high school, St. Bernard High. I had the opportunity to briefly record a video interview of Chris and was immediately struck by his presence on camera. A few weeks later I was attending a fundraising gala for St. Bernard and towards the end of the evening, I heard a commanding, confident voice delivering a speech and saw Chris walking onto the stage. He was performing Freedom Song and within ten seconds he had an entire ballroom of 200 people captivated in complete silence. I couldn’t believe how crisp and controlled his delivery was. He finished to a rousing standing ovation and I barely let him get off the stage before I walked up to him, reintroduced myself from a few weeks earlier and said: “We need to put that speech on camera, immediately.” I hastily pitched him the one take idea and he agreed on the spot. I then quickly found a few members of the school administration and asked for their permission to use the empty high school on a weekend. They agreed and we were off and running.

What did the initial treatment of this film look like, how did you work together to develop Chris’ poem into a short film?

I had spent a lot of time around the St Bernard high school campus and gymnasium documenting the basketball team and I was determined to find something to shoot in the school building. As you can see in the film, there are parts of the school that appear frozen in time. Its character is undeniable so I’ve kept it in the back of my head as a location to use. As I watched Chris’ speech that night, I thought, “This is it, this is what we’re filming at the school”. It really was that simple. No proper treatment, just a location that I was enamored with and five minutes of incredibly powerful prose. My DP Andrew Amine and I had been discussing potential projects and when I called him the day after the gala event, he jumped at the chance. 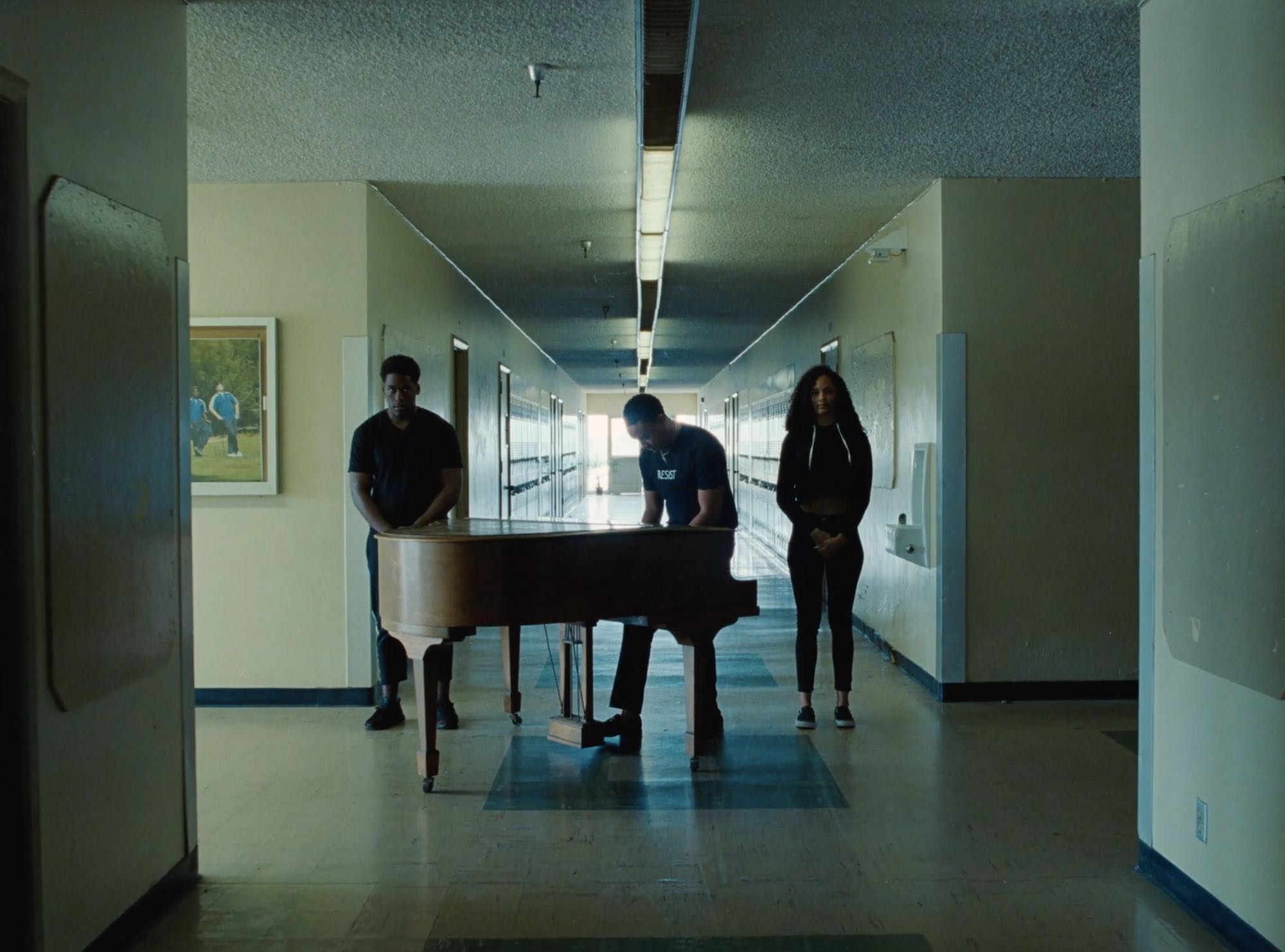 How did you come to the decision of shooting the video in one take?

When I first moved to LA, I worked for a feature film producer and then on to a few other jobs in development. Those jobs allowed me to dive deep into films and scripts and develop my creative taste. I discovered that I was drawn to authentic moments that rarely involved SFX or green screen. I started to note and appreciate long, continuous takes in films and shows and became enamoured with their simple complexity, and then I saw Cary Fukunaga’s six minute oner in True Detective.

If I’ve learned anything from this project, it’s that when you go all-in on something challenging, it’s easier than settling for the “sure thing”.

From that point on, I became obsessed with the idea of shooting single take scenes. If I’ve learned anything from this project, it’s that when you go all-in on something challenging, it’s easier than settling for the “sure thing”. The concept of a 4:10 oner on film had our entire crew’s complete attention. There was no backup plan. We weren’t walking away with anything but a single shot take and that elevated everyone’s game.

What was the production process like? How many takes did you shoot?

Our biggest challenge was figuring out how to get Chris’ speech down to 4 minutes and 10 seconds. The fastest he had delivered the speech was just under 5 minutes. The most film we could fly on the Steadicam was a 400’ mag, which computes out to about 4:15 of usable film time. I wanted to preserve the sanctity of his speech and avoided asking him to cut lines. Instead, he was able to deliver it at a slightly faster pace and consolidated one line on each of the singing parts while streamlining some wording at the end. We did a few test runs with our entire crew to simulate timing and coordinate the shuffling of people. For each take, we had our Steadicam Op, Thom Valkor, our loader, and stand-in Steadicam Spotter Dan Muchnick, first AC, Chris Cote, Gaffer, Jihan Casquejo, Audio Tech, Mark Patino, along with myself and Andrew all walking behind camera. We had to time the routes of Chris’ friends Alison Brown and Ricky McGregor as well and made sure they could quickly get from spot to spot.

We had a few 400’ rolls of film but given the cost of the film and developing, we were hoping to get it on our first or second take. Our first take was really good but we wanted one more shot at the complex route, so we reloaded and ran it back and nailed it on the second take. I don’t want to understate how much had to go right for these takes to work. Before the first live take, we saw how tight everything had to be and there was some fantastic nervous energy on set. The best part was you couldn’t tell by looking at Chris. He took every single bit of direction with ease. His command of his material was staggering and absolutely necessary to pull off something like this. I never once mentioned to him what to do if he fumbled on delivery – he was in a zone and it was awesome to watch. Ricky and Alison were also total pros. They hit their marks, completely bought into our shooting plan and nailed their parts.

I’d also like to shout out Thom Valko, our Steadicam op. We shot on the Panavision Millennium XL2, which is a beautiful camera, but not exactly the ideal object to hold for 4:30 while going in and out of tight doorways, hitting marks and walking down flights of stairs. His command of the Steadicam was brilliant and we do not get the project done in two takes without him beasting this.

I don’t want to understate how much had to go right for these takes to work.

Given the subject matter, it feels apt that you would shoot on film, was this part of your creative decision?

My DP Andrew Amine was adamant we shoot on film. We had been looking for a project we could shoot on film and the combination of Chris’ material, the heightened authenticity of doing it one take and the color palette of the school were all a perfect fit for 35mm. When we considered how tight the timing would be with the 400’ mag of film, I asked him if we should consider shooting digital as an alternate option. He quickly shot that idea down, for which I will be forever grateful. Our entire crew was so focused on set and shooting on film had a lot to do with that. Andrew tracked down some 4-perf 35mm Kodak 500T (5219) from Reel Good in LA, worked some magic at Panavision and next thing I know, we were prepping camera at Panavision in Hollywood. Fotokem did the processing and we were ecstatic when Joseph Bicknell at Company 3 agreed to do colour.

I’m bidding on a few commercial projects along with pitching some music video ideas that allow me to try and push creative boundaries. We’ve been really excited by the response Freedom Song has gotten thus far and I’m working on getting it in front of as many people as possible. I’m also working with Chris to help him develop his career as a writer and actor.