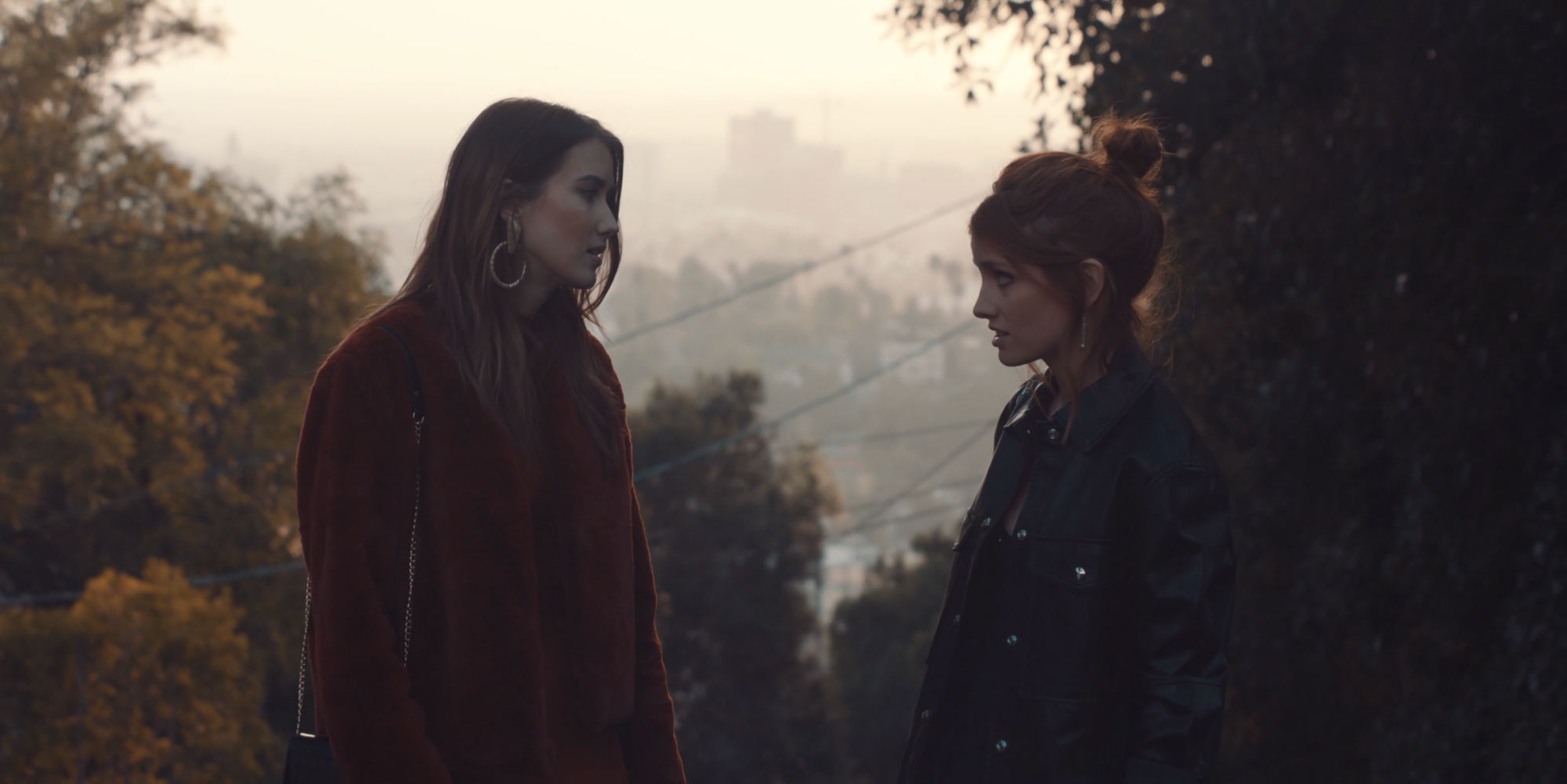 In the aftermath of a heavy night out, two young women meander through the sun-kissed hills of early morning Los Angeles. This is the setup for Henry Young’s brilliant one-shot short The Big Nothing which sees the duo ponder the meaning of existence among other ‘things’. Young’s film is deceptively simple. It has the cool confidence of a filmmaker who makes shooting a single shot short in the busy streets of LA look like nothing. As part of The Big Nothing’s premiere on our pages today we caught up with Young to find out about the extensive planning which made this ‘oner’ look so damn easy.

What planted the seed for a short film about a philosophical conversation between two women after a night out?

The seed for this idea began pretty simply. I knew I wanted to write something fun and unconventional between two female characters. I loved the idea of eavesdropping on a conversation and having it subvert your expectations in some wild and entertaining ways. To that end, two partied-out ladies grappling with philosophical malaise felt like the right direction to go.

Admittedly this script is closer to a monologue with Grace’s character doing most of the talking, but I liked the notion of writing a scene that felt like it could also be at home in a stage play. Broadway hit me up. It’s safe to say I have a fairly dark and subversive sense of humor that infuses into much of my work. There’s a beautiful absurdity to life and I relish any opportunity to explore that in a truthful, subtle way.

I loved the idea of eavesdropping on a conversation and having it subvert your expectations in some wild and entertaining ways.

The long shot of the street is epic. Was it difficult to source the location?

Location was very much a character in this film. My good friend and Cinematographer Shaun Dixon and I spent several days driving and hiking all of the steepest hills in the greater Los Angeles area. I should probably buy him some new brake pads.

Ultimately we ended up settling on a location I had in mind early on: the very top of Micheltorena Street in Silverlake. Much of our additional scouting was to find a viable backup since the residents and powers that be don’t like people filming up there. Apparently just weeks beforehand some other production had accidentally sent a picture car careening down the hill where it crashed into a resident’s vehicle. It took a lot of negotiation, but we were able to secure the location providing we had plenty of police officers and wouldn’t obstruct traffic for longer than two minutes at a time.

One-shot films often revel in their choreographed cleverness but The Big Nothing purposely goes the other way.

I knew I wanted to try to tell this story in a single take, without cuts or coverage of any kind. Most ‘oners’ tend to rely on elaborate blocking and beautiful choreography, and while those can be fantastic, I felt compelled to lean in the opposite direction in this case and try something extremely pared-down and simple. At times I felt like I was flirting with disaster since a seven page scene is pretty long, but I enjoyed the challenge of trying to sustain the audience’s interest all the way through without any flash or spectacle.

Rather than mount the camera on a vehicle or Steadicam, I opted to shoot on a zoom lens, which was also uncharacteristic for me. I tend to favour spherical prime lenses more often than not. Shaun has a great relationship with Panavision Hollywood where we ended up pairing the Arri Alexa LF with their rare 48-550 Primo.

Did the shoot itself reflect the simplicity of the scene?

This was a deceptively simple looking scene to pull off but required a fair amount of pre-planning. We had to map out and time the speed and arrival of each car to be perfectly timed with their cues in the script. The focus pull alone was a bit of a feat since the actors are essentially walking straight towards camera for a couple hundred feet and their starting mark was too far out of range to utilize any infrared focus assist devices. Our frame was fairly wide too, so laying down marks wasn’t really an option either. The best solution ended up being to wine and dine Noah Ramos who is an insanely talented first AC and have him pull focus manually.

Given the intensity and unbroken length of the dialogue did you have any difficulty casting your philosophical pair?

Casting was a breeze. I was ridiculously fortunate to find Mary Elaine Ramsey and Janelle Grey. They’re two of the funniest, sweetest and most dedicated actors I could have hoped for. They had a lot of material to get through while walking uphill in heels over and over again and they somehow made it look easy. I certainly owe Patrick Curran and Heather Adair a debt of gratitude as well for bringing a lot of fun to their brief cameo appearances.

Other than the residential location, the requirement of having police on set and shooting the entire film in one-shot, how do you feel the shoot went?

The shoot went well despite some hilarious challenges. Our scene ends at the very top of the hill, which we had to share with a couple hundred wedding guests arriving by car. Fortunately, most guests had arrived by the time we needed to start rolling. We shot dusk for dawn too so there was a fairly limited number of takes we could capture before we lost the light – we rehearsed in daylight beforehand. We certainly could have lit up the street, but I really loved the naturalism of the soft ambient light and how it added some mundane believability to juxtapose against all the unfolding coincidences.

I enjoyed the challenge of trying to sustain the audience’s interest all the way through without any flash or spectacle.

And finally, I heard that you wrote the song at the end of the film – is that true?

It’s not in the credits, but the song at the end of the film was something I wrote and recorded with Andrew Duncan, who’s an amazing composer and dear friend. My lovely Producer Reina Lam has a beautiful voice and was kind enough to provide the lead vocals. I have a background in music but haven’t written anything in a long time, so it was fun to step back into those shoes and create a little original piece for the film.