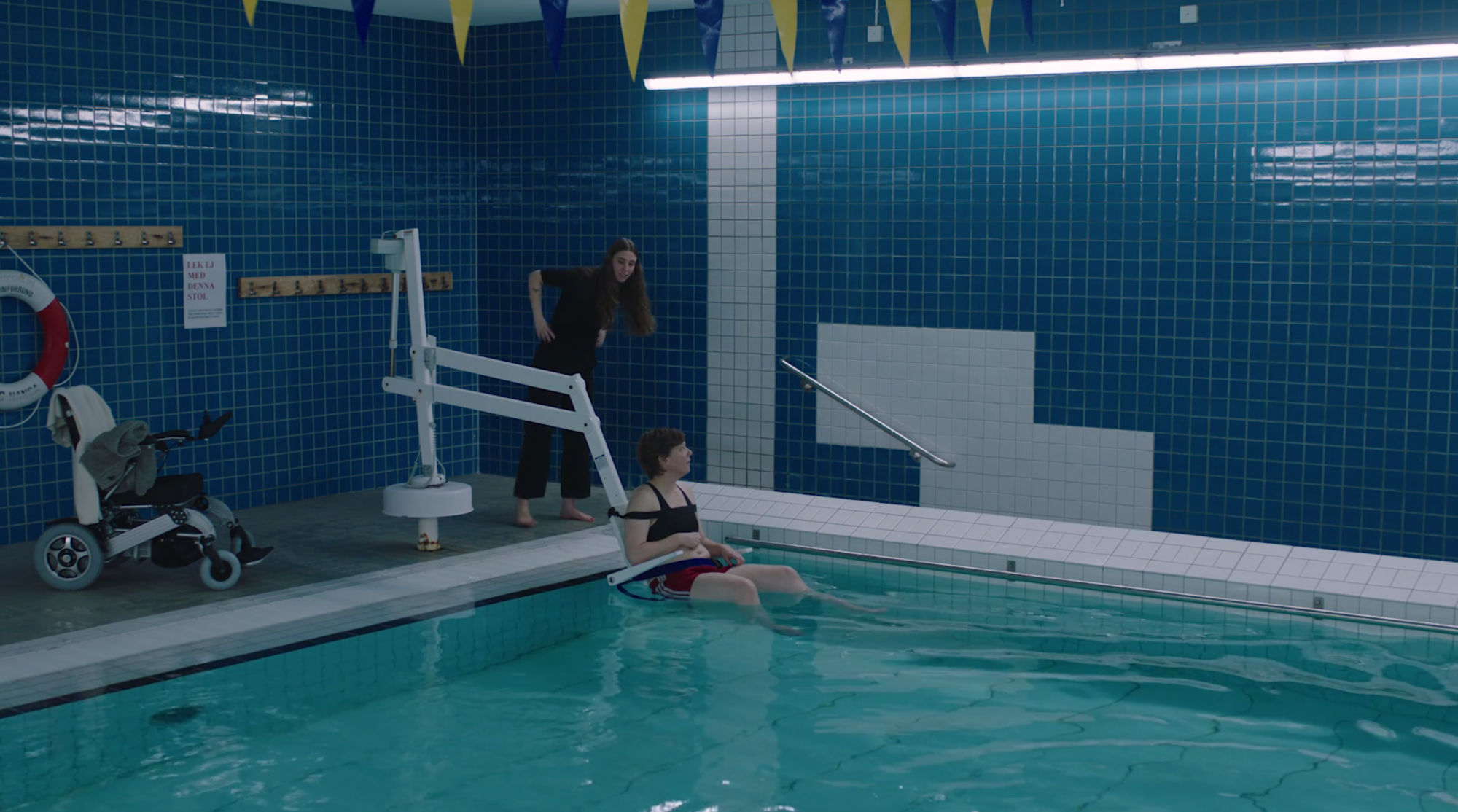 The need for intimacy, the throb of desire and the inevitable swiping left and right on our phones are all very relatable experiences. However, why does thinking of a disabled person needing all of the aforementioned make many of us feel uncomfortable? Why do we falsely automatically assume that desire is only for the able bodied? Never one to shy away from topics that spark an emotional charge in audiences, DN alum Jimmy Olsson – who so effectively made us glare racism in the face in 2nd Class – presents his latest offering Alive. The film introduces us to a carer and her patient whose palpable relationship of conflicting emotions, touching moments and genuine care is keenly felt. With his sly sense of humour, Olsson highlights the misguided assumptions held of disabled people and intimacy and the unconscious prejudice within those biases. Directors Notes is delighted to catch up with Olsson to discover why he wanted to broach this under discussed subject and the importance his actors hold in his craft.

Where did the inspiration for Alive come from and why did you want to depict such a delicate subject matter?

Last year I listened to a podcast and there was a story about a disabled guy who wanted to have an escort and he told his assistant that he couldn’t be at his home when the escort arrived, so the assistant had to wait outside at a coffee shop. When I listened to that story, I immediately felt something. Every time I write something or when I make a film it’s almost always from what I have read or experienced in real life, even if it’s just a sentence or a split second I can sense if there is a film there or a piece of drama. In this case I almost went inside this assistant’s mind waiting for that escort. Who would come? What does this person look like and what could happen? What happens if something bad happens? Whose fault is it? Who is responsible? That got me into thinking about prejudice and about how we as able-bodied people might think about and see disabled people. I wanted to challenge my own prejudice I have had in the past.

I wrote the script at a record speed when I was at Munich airport waiting for my flight home to Stockholm. Everything just flew out of me and I had a first draft within an hour and a half. Afterwards the feelings of insecurity came out and I started wondering whether the piece was any good and if there was anything there. I emailed my producer who loved it and we decided to go ahead with the idea.

Everything just flew out of me and I had a first draft within an hour and a half.

The title is perfect, did that come first in your writing or did it originate from the script?

Thank you! It’s always hard to come up with a good title. I wanted to have something punchy and this was the second try. I repressed the first one we had, it wasn’t any good. I came up with Alive the day before shooting.

I’ve read you have a particular love for the fabulous Dardenne brothers, how are you influenced as a director and how do you think you have developed your own style?

I am very influenced by their way of telling ‘simple’ stories so to speak. They are very clear and they take their time to get into the characters’ core. I love that. I love the fact that it is super realistic. I am not trying to copy them in any way but they have helped me in my writing. I have developed when it comes to really squeezing the right stuff out of every scene and to extract scenes that don’t tell you anything important. I guess I have learned to be more efficient. 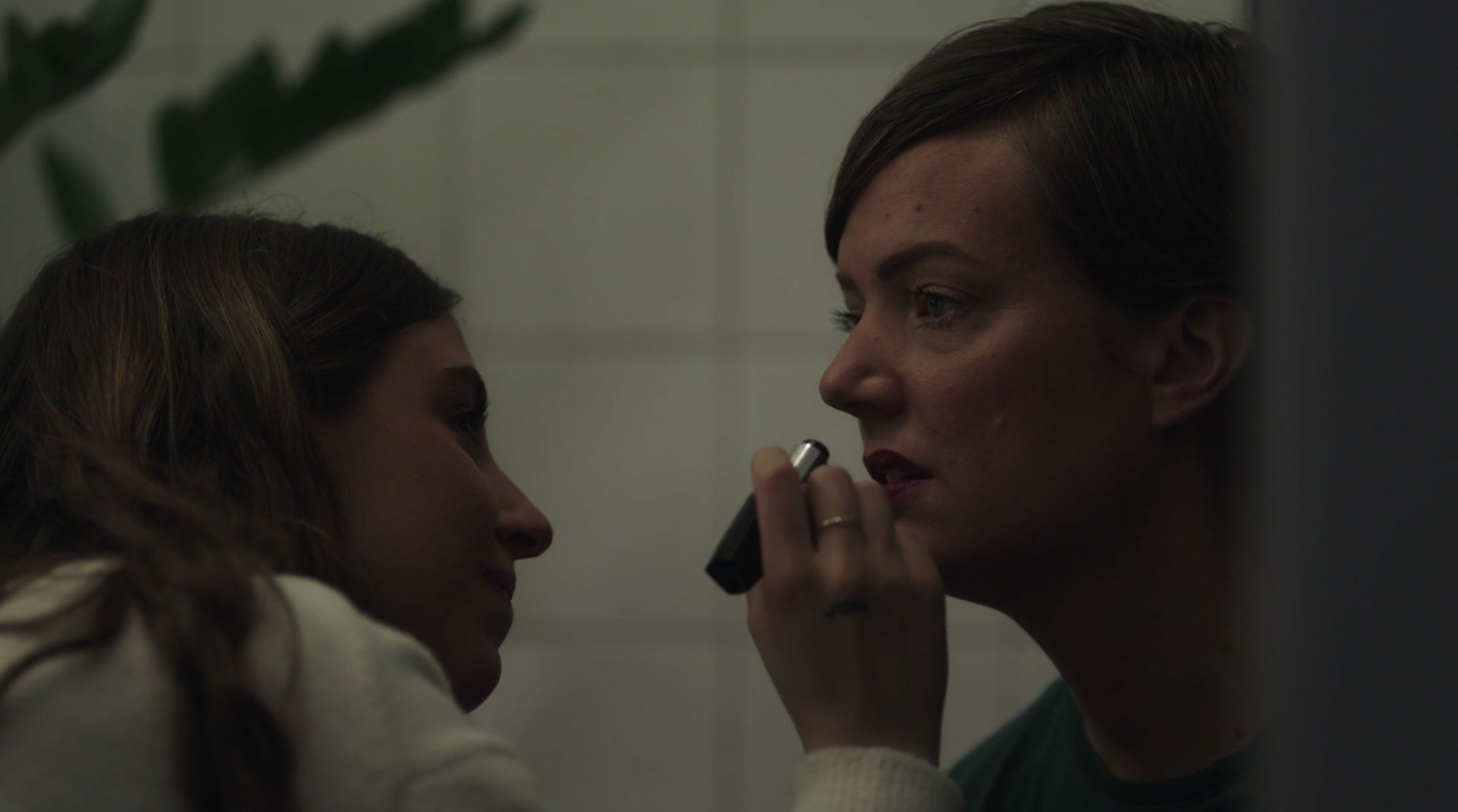 The acting is simply phenomenal, particularly the performance from Eva Johansson. How did you two come together and then shape her performance as a disabled woman?

Madeleine Martin who plays Ida sent me an email with a picture of Eva Johansson and I recognized her from another short I had seen several years ago so I asked her to come in for an audition together with Madeleine. I immediately felt that she had the engagement and willingness to explore this character so after an hour or so she was cast. After that, we started to work with the character and the text and the three of us met several times to work on the final result.

I immediately felt that she had the engagement and willingness to explore this character so after an hour or so she was cast.

Eva did a lot of research work after we had decided what kind of disability the character should have. Eva and I had a lot of talks and I didn’t micromanage her at all during the shoot. She was in character all the time and the only thing I adjusted was her speech. I listened carefully and every time it felt too smooth I adjusted her. She is just an amazing actress. 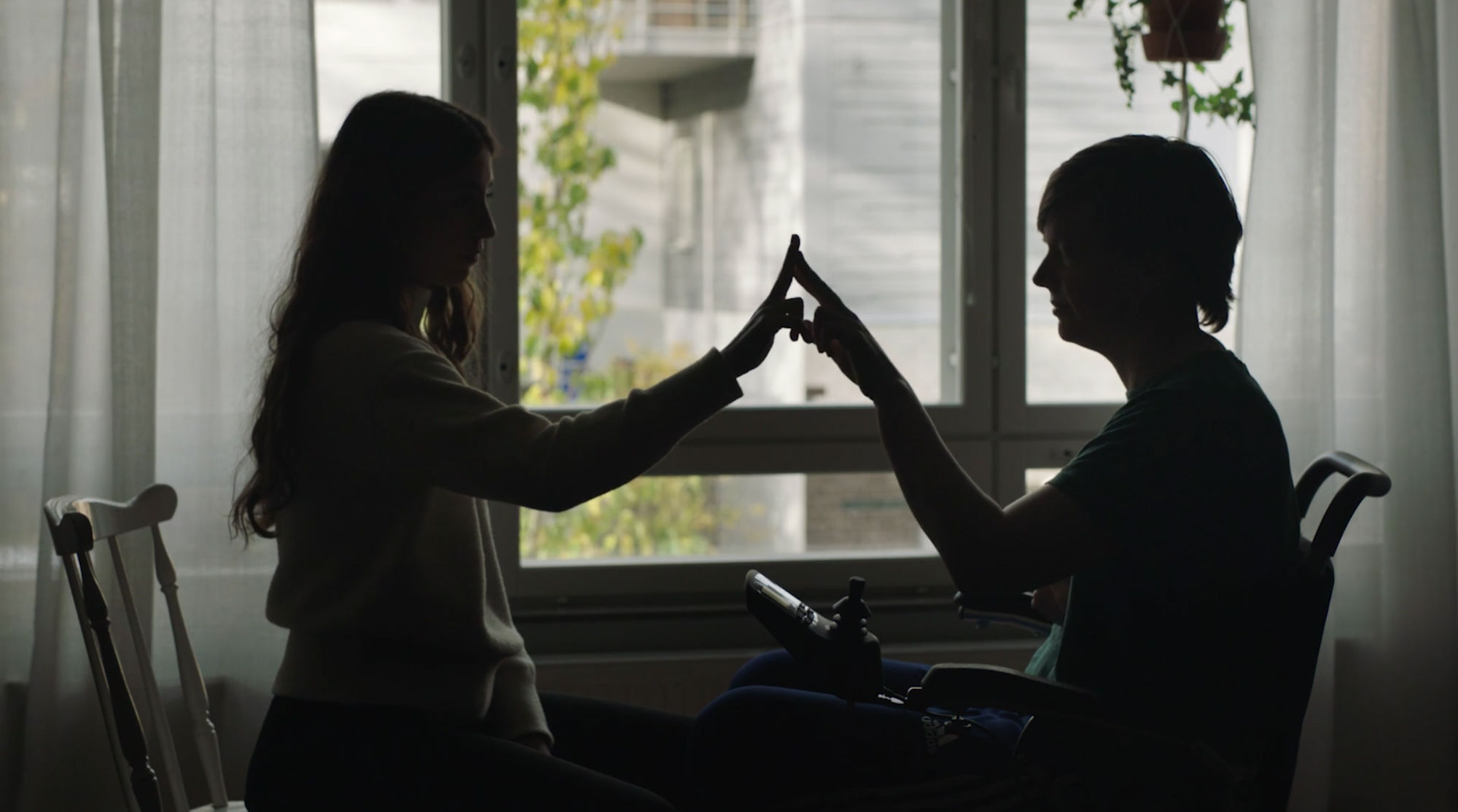 The colouring of a lot of the scenes are quite dark and sombre, why did you choose to film this way and please tell us about the equipment used?

I look suspicious, that’s my thing I guess.

We shot the film over two long days and normally that’s unheard of but we managed quite well because we were well prepared. We used an Alexa Mini.

Why did you decide to cast yourself as Hakan? The audience are wary of him as a reflection of the tension we garner from Victoria, did you want people to notice it was you?

I look suspicious, that’s my thing I guess. Our budget for this film was minuscule and we thought since the part was so small it would be easier to just cast me. We didn’t really talk about the fact that people will recognize me since the film is shown mostly abroad and if they do recognize me, I haven’t noticed any criticism about that. 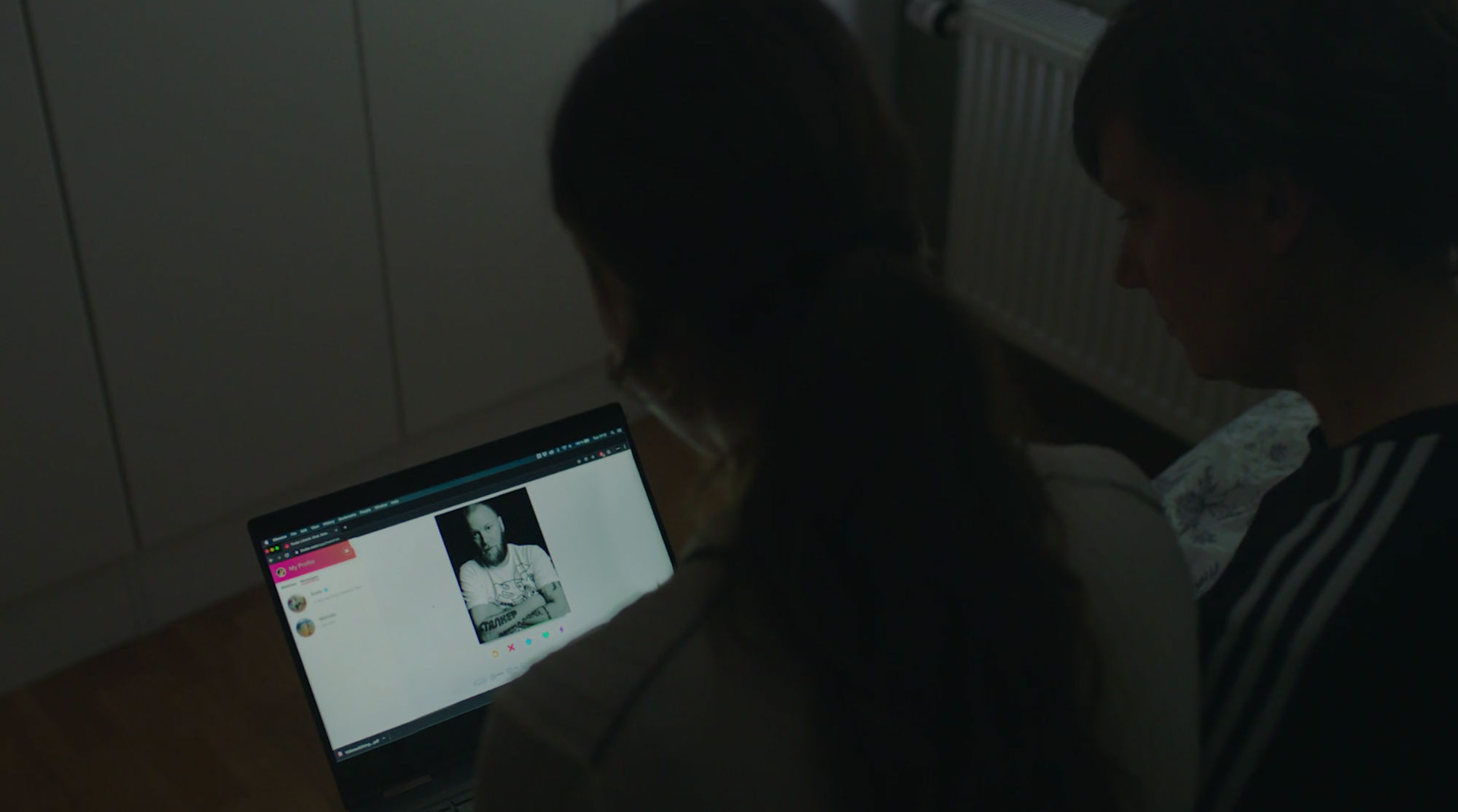 Were there any particular parts of production which you struggled with and please tell us more about the team you worked with and how the project developed into editing?

This film was a joy to make. A tiny budget and a tiny core team shot for two long days and it went perfectly. The DP is a great friend of mine and we have shot lots of stuff together. We know each other well and I used the same producing team I used for 2nd Class, my previous short. They do mostly commercials but want to get into drama a lot more. They are new school producers you could say cause they are really hands on which is very good when it comes to really small films like this one with a very small budget.

The sound guys are also quite new to the game and I wanted to give them a shot at this and they really delivered. I’m going to work with them in the future as I’m extremely happy with the team. We really worked well together. The editor is also new to the game and he is really keen to learn more. We didn’t shoot that much really. We shot what I felt we needed so the actual editing wasn’t too hard I think. Of course, a better budget and one more day would have helped but the outcome with these circumstances is superb.

What can our audience look forward to next from you?

Right now I’m working on two features and two TV series. One feature is based on the short film I made 2 years ago, 2nd Class where a woman of color who works as a teacher is attacked by a neo nazi and she discovers that one of her students is the son of that neo nazi. I’m thinking of making it in the US actually if I find the right producer for it. And the other feature is about a woman who is forced to work as a sex worker because she is an illegal immigrant and one day she gets a well known politician as a ‘client’ and discovers something really bad when he is asking her for a sexual favour.