Making the transition from commercial filmmaking to narrative shorts can be tricky but it can also prove fruitful. Such an example of this would be Koya Kamura who after working in commercial filmmaking for over ten years decided to take the leap and make his first narrative short, the Fukushima-set drama Homesick. Kamura’s film is set in post-disaster Japan, two years after the Fukushima nuclear disaster, and follows a father who navigates the no-go zone of the local area in order to spend time with his son. It’s a beautiful and humbling film that subtly weaves through the stages of grief via a poignant use of symbolic imagery. DN joined Kamura in conversation to learn more about the photos which kickstarted his inspiration for the film, the challenges of a pre-production period preparing to shoot in Japan, and the digital recreation required in order to reflect the environment of Fukushima two years on from the tragic events.

Homesick marks your first narrative short film, what spurred your decision to make it?

For as long as I remember, I’ve always wanted to make narrative films, but I kind of got lost on the way. I’ve been directing commercials for more than ten years now. Even though I’ve been trying to write scripts since was a teenager, I’ve actually never finished any of them.

Homesick is the very first one I finished. After the 2011 Japan tsunami and nuclear catastrophe, I saw a series of photos made by a French photographer called Guillaume Bression. He took pictures of the no-go zone, and looking at these objects, toys abandoned in the dust, I couldn’t help but imagine to myself where did those objects come from, and to whom were they missing? Besides that, in 2012, my first kid was born. With his birth came a lot of fears that I guess come along with parenthood in general. Those two major events gave me the urge to write this story.

How challenging was it to assemble the script from those themes and get the ball rolling on a film production?

It took me about two months to write the script. I really thought it would go nowhere. As it’s my first film, I never thought a French producer would do a project in Japanese, in Japan, in Fukushima, with an eight-year-old boy. But I found a producer, Rafael Andra Soatto, and went for it! Then we got a few connections in France but were met with a lot of difficulties finding a producer in Japan as it was a touchy topic. A wound still fresh and a political subject. So it took us almost a year to find our executive producer in Japan, Hiroto Ogi.

So much of the story is told visually. Do you storyboard thoroughly in pre-production to help with that?

Yes, I guess I’m more motivated by visuals than writing. The images came to me even before the story so I had a pretty clear idea of many of the shots in the film. So I poorly drew the whole film. Even if the drawings were bad, the idea was only to be able to share them with the crew and especially my DoP, to make sure we understood each other.

He took pictures of the no-go zone and looking at these objects, toys abandoned in the dust, I couldn’t help but imagine to myself where did those objects come from, and to whom were they missing?

The location of the no-go zone is so vivid in the film, how long did it take to scout? And how long were you shooting in each of these places across production?

The shoot lasted for six and a half days. Three days around Chiba, near Tokyo, in a ‘clean’ area. We shot the abandoned house in the beginning, the beach scene, the final river scene. Three days around Ishinomaki, an hour drive from the nuclear plant. This is where we shot the temporary housing, the amusement park, the first street where the father leaves his son driving away in his car, and half a day in the no-go-zone. It was only the three of us. My DoP Kaname Onoyama, a production assistant and I.

Given that it was your first film did you carry over some of the crew that had worked with you previously on your commercial films?

We had approximately 20 to 30 people on the set. All of the crew were Japanese or living in Japan. Kaname, my DoP, was the only one living in France. He’s Japanese but has been living in France for more than a decade. Everything went quite smoothly. I had an amazing team. Super professional, focused and creative. It was quite different from shooting commercials in France. The spirit on the set is different and the habits are different. I learned a lot.

Did you tackle post-production in Japan or France? And how did you approach colouring or VFX to showcase the environment affected by the tsunami? 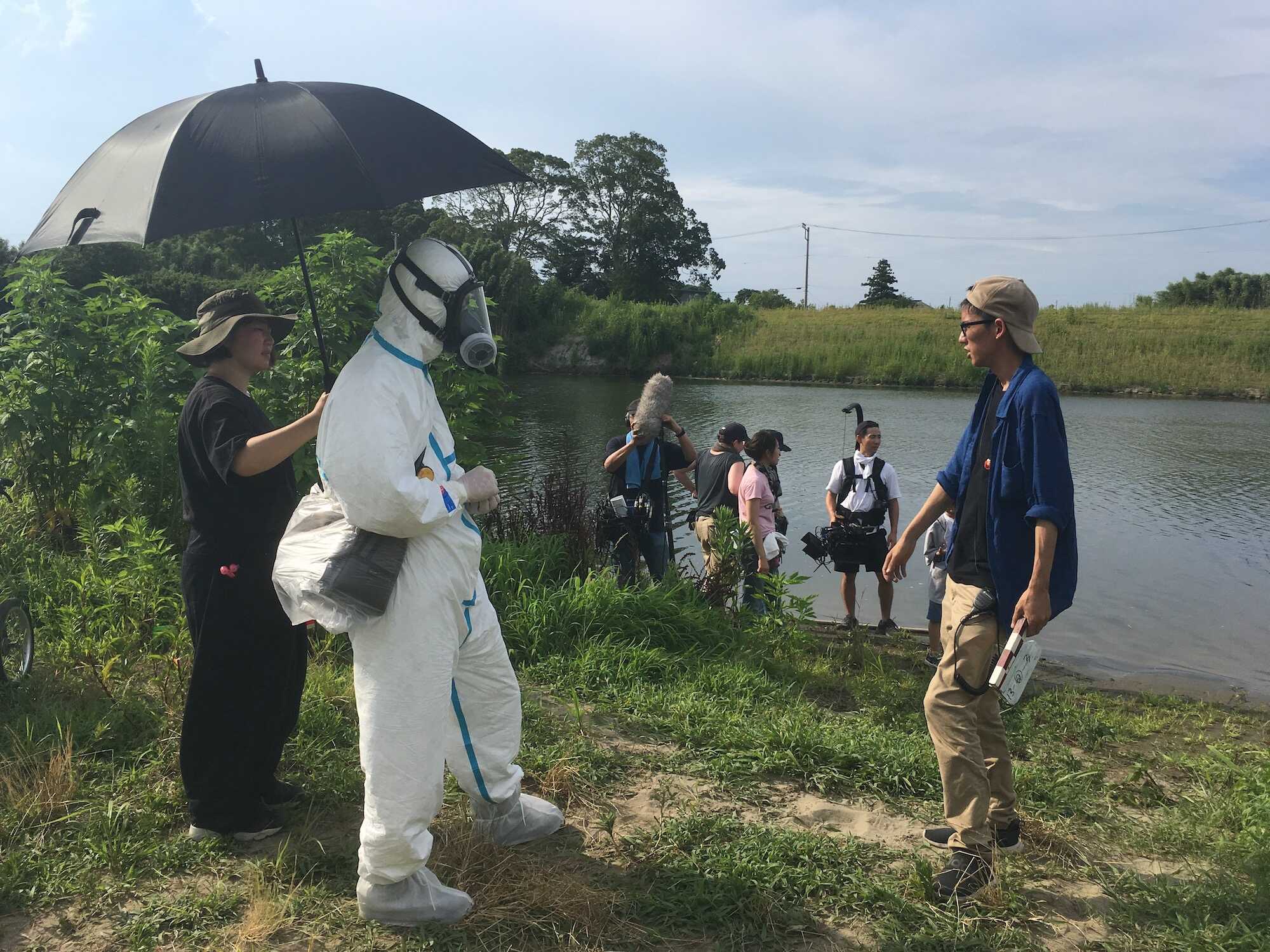 Could you talk about the process of casting Jun and working with Ikoma Shouta? His performance is amazing!

He is incredible indeed! I only saw a few kids when we were casting but Shouta stood out! He was so smiley and cheerful and that’s just what I needed for Jun. As I was already dealing with heavy topics I wanted to counterbalance with a very cheerful kid. I’m used to working with kids and animals in commercials. Of course they’re not the same but, to be honest, they behave the same way on a set. You’re never sure of what you’re going to get. You have to obtain what you want through games and tricks. So that’s what I’m used to shooting a lot, and use the in-between takes which often are the most realistic and natural ones.

It was quite different from shooting commercials in France. The spirit on the set is different and the habits are different. I learned a lot.

Also, I was kind of concerned about how I was going to present the character of Jun to Shouta. Do you tell an eight-year-old kid that he’s playing a dead child? But, one, I didn’t have the time to shoot that much as our schedule was very, very, very tight. Secondly, and fortunately, Shouta was nowhere close to any of the children I’ve been working with. His professionalism was astonishing. He was very focused and knew his dialogue perfectly. He understood what I needed, and gave it right away! I was so impressed by him, and lastly, Shouta perfectly understood his character so everything was very very smooth.

How did your experience in commercial filmmaking aid you when making Homesick?

As it’s my first film, before shooting, my main concern was to make a film that looked like a film. But very quickly I realised that my experience in commercials helped me because I was familiar with the set, the crew, the production process, etc… So my main concern became to direct the actors properly as it’s not something really developed in commercials. Also, to be 100% honest I think that one of the reasons why my first film is in Japanese, even though I’m French and live in France, is also a little because I knew that if the acting was bad, I could hide it because it was in Japanese, and French audiences wouldn’t feel that much. I know, how stupid of me!

How are you reflecting on the film now that it’s out in the world? Has your experience making it shaped what you’ve got coming up in the future?

I’m very grateful for the life of the film. It got selected for more than 60 festivals and it received more than 40 prizes. Also, it was officially selected for the César Awards in France. And now it’s finally online. I’ve been waiting for that for a long time as I really wanted to share it with as many people as possible. It’s my first film, but it got me the chance to meet up with many producers which has led to me signing the development for two feature films that I’m currently working on.