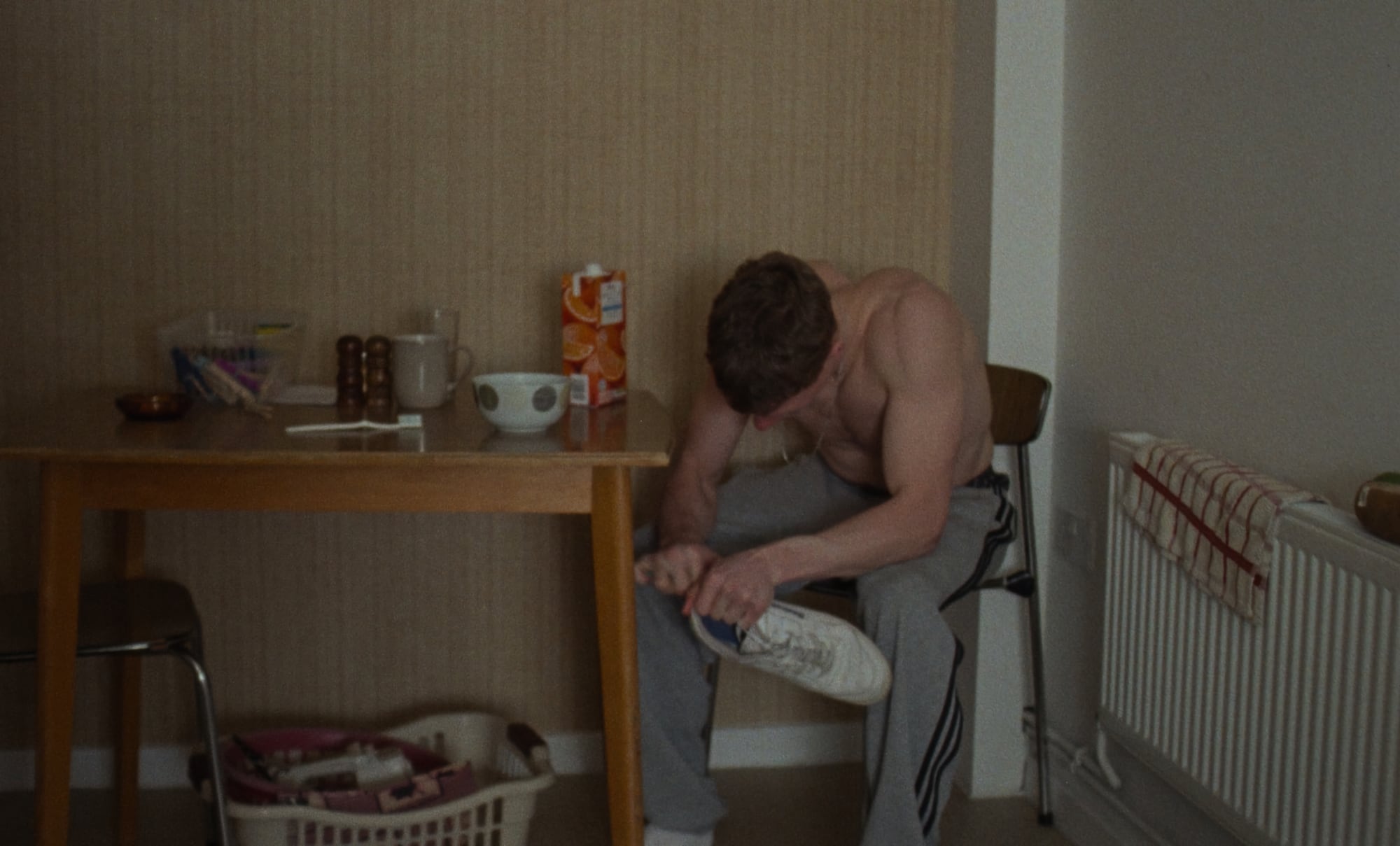 Harris Dickinson joins DN today with the premiere of his Devisio Pictures produced film 2003, a short that chronicles a young soldier’s final day before deployment. The film is a gripping drama centring around the soldier’s uncomfortable if well-intentioned relationship with his father. The actor-turned-director – known for his nuanced performances in films by Xavier Dolan, Eliza Hittman and Joanna Hogg, and previously seen on our pages in a range of films such as Beach Rats, County Lines, and BIFA winning short Femme – brings an intuitive care to the performances of his own actors whose relationships in the film feel impressively well-rounded and complex. Dickinson also employed established Cinematographer Robbie Ryan to shoot the film on 16mm, giving the short a grainy texture which perfectly situates it in its early 00s setting. You can watch 2003 in its entirety below, after which we get into an in-depth chat with Dickinson where he breaks down how his journey as an actor informed his rehearsal-centric tendencies as an emerging filmmaker.

What drew you to make a story about a young man experiencing his last day of freedom before joining the military?

2003 started as a feature idea four or five years ago, I wanted to make something with the military as the backdrop but in way that challenged the institution and focused on the individual. I was very close to joining the military at 17 and I looked for structure and acceptance in something that I didn’t understand. That later made me want to unpack what it meant to step into that world.

At what point did the idea shift from a potential feature into a short?

I realised the story I wanted to tell could have been told in a much shorter amount of time and I needed to reduce and focus. 2003 shape-shifted into something more personal, more intimate and more precise. I wanted to show these two men at strange intersections in their lives. A son about to go to war for the first time and a father not only battling with his own demons but having to say goodbye to his son.

The performances in the film are wonderfully naturalistic. How was it working with your actors, coming from an acting background yourself?

We were so lucky to have great actors and a wonderful crew who gave it their all. We had a week of rehearsal and really made sure the relationships were there before stepping on set. For me, rehearsal and script workshopping are a must, coming from an acting background I’m aware how tough it can be without it.

I wanted to show these two men at strange intersections in their lives.

How did you find the process of getting a short funded?

There were a few years of trying to get it financed. No one really wants to fund a short. After some pitching and convincing, we had the full support of Rose Garnett at BBC films.

What was it like collaborating with Robbie Ryan and conveying your ideas to him? It must’ve been a joy to work with such an established DoP.

It took me a while of talking to DoP Robbie Ryan about my vision and intention for it. I wanted to assure him I knew the world I was trying to depict and I had something to say. We shot on 16mm on the ARRI 416. It was a simple, stripped-down shoot, it felt focused and collaborative. It needed to be intimate and authentic. Having a crew who gave it their all was so important, I’m really grateful to have made it with everyone. It’s something I’m proud of and I hope people find access into the story.

How has your experience as an actor working with filmmakers like Eliza Hittman, Xavier Dolan and Joanna Hogg informed your approach to the directing?

It’s definitely given me an incredible insight into that level of filmmaking, though I was always so focused on my role as an actor within those films and liked to keep those sides of myself separate. But being a part of storytelling where the leaders are striving for something special is informative in many ways, noting their commitment to their film and their passion and dedication to truth. Seeing how they work with actors is different for everyone, I don’t think you can take someone else’s approach because it’s personal, it comes from the way you interact with people, how you convey emotion to peers, and how you instil confidence or trust in someone. It’s nuanced. It’s like a short relationship with each actor, trying to figure out how they work and how to best direct them.

You mentioned earlier too about the importance of rehearsal with your actors, did you have a specific approach to rehearsal when developing the relationships between the characters in 2003?

It’s just about feeling the situation out and finding the flaws and moments where things don’t feel right. Letting the actors get comfortable with the script and with each other. It’s vulnerable being an actor sometimes, you have to build the trust between co-workers in a short amount of time and that’s not always easy. So spending time together, even if it’s just chatting and getting to know one and other; that’s valuable too.

For me, rehearsal and script workshopping are a must, coming from an acting background I’m aware how tough it can be without it.

The 16mm cinematography has a wonderful texture and timeless feel. Were you always looking to shoot on film or was that something that came from your discussions with Robbie?

I always wanted to shoot on film. I never saw it as a viable option with a low budget short film but soon realised it was more affordable than one might think. Robbie has a real passion and expertise for film, so it was clear we had to go with 16mm. We also spoke about the piece feeling slightly disconnected and timeless like it was in this weird interim of worlds, set in 2003 but not relying on nostalgia-porn or trendy set design to convey period. Robbie really is a master so I didn’t need to worry about the look and feel at all. He was open to my thoughts on everything but it was a natural process, he always wants to push it further and find something authentic with his work, so giving him the space and environment to do that was important.

What was it about the year 2003 that made you want to specifically set the film then?

The 2003 invasion of Iraq was the first stage of the Iraq War and I felt that was prevalent to the story.

And lastly, can we expect to see you in the proverbial director’s chair again soon?

I hope so, I have a few different things in development so am trying to just keep my head down and get those to the best place possible!