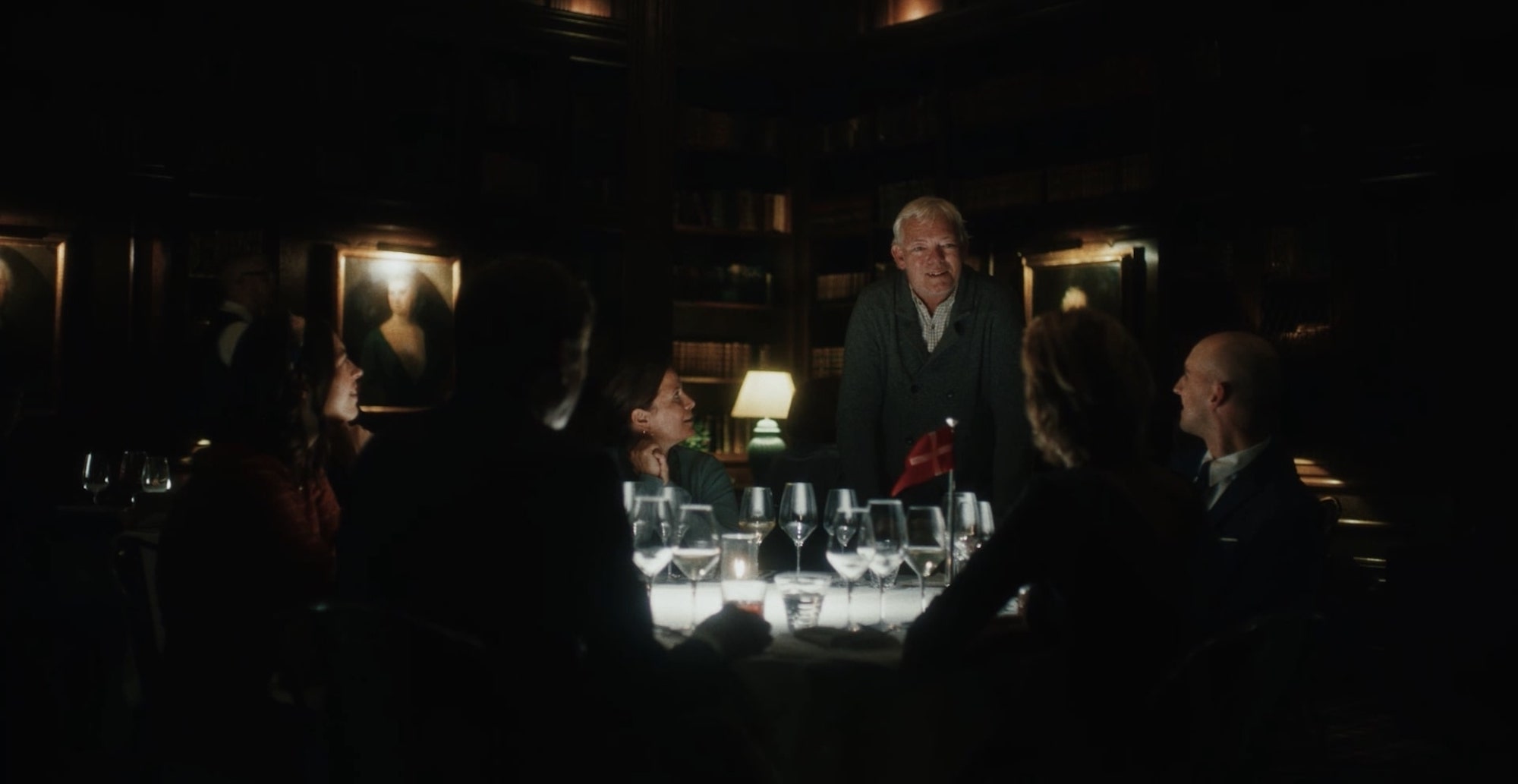 It’s a well-known fact that if you are feeling nervous, especially at a social event, having a couple of drinks can easily help you to calm down. Nonetheless, if you have no self-control, you can run the risk of drinking too much, saying too much, and making a far bigger mess. Few films have captured the tumultuous and heady mix of social anxiety coupled with alcohol dependency as well as Marco Lawson’s The Dinner (Middagen), a Danish film that feels in the spirit of classic Dogme 95 cinema, bringing to mind Thomas Vinterberg’s Another Round and Festen. Telling the story of a man meeting his daughter-in-law’s parents for the first time, it carefully peels back layers surrounding class, masculinity and social norms with painfully acute observation, buoyed by an oppressive atmosphere and smart set design. Impressed by this uncomfortable depiction of social anxiety, we talked to Lawson about Danish drinking culture, creating a tight feeling and making sure the actors were perfectly cast.

The Dinner builds from a relatable premise, meeting your in-laws, and slowly turns it into a nightmare. But what do you think is so innately awkward about meeting the in-laws in the first place?

Personally, I think the biggest trigger point on occasions like these is trying to be something or someone you’re not. Not staying true to yourself is very dangerous. But also, very understandable and actually very touching. Because feeling insufficient isn’t by choice.

Some of my greatest memories come from nights out drinking, but it’s a balance and for some people very tough to handle.

It’s interesting because it’s not just about different people meeting, but different members of the social class — as seen by Lars’ awkwardness around certain social mores. What was the challenge to weaving that class difference into the narrative? 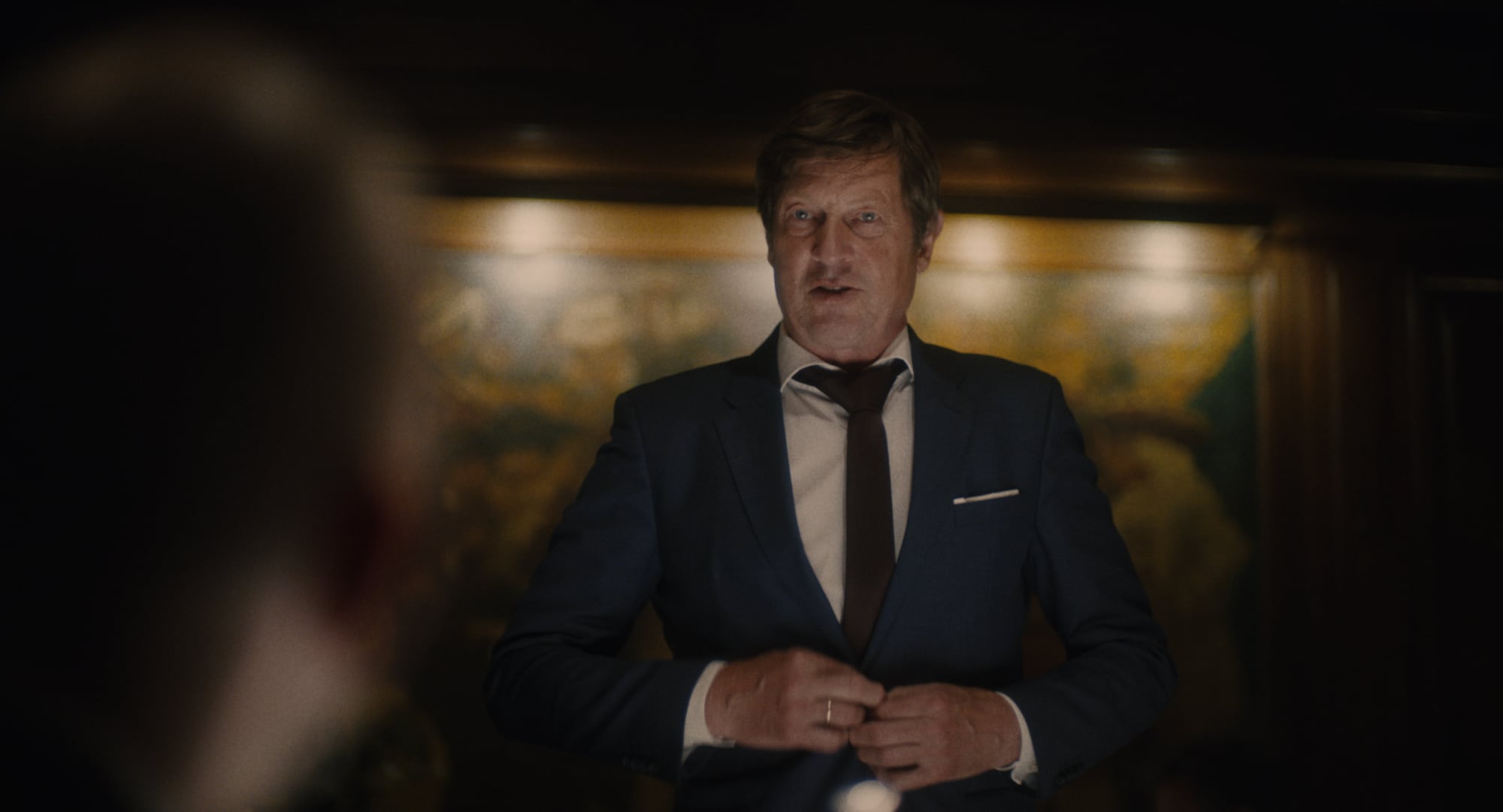 I couldn’t help but notice the Danish flags, and also how this film builds upon the drinking-heavy premise of Another Round. Does Denmark have an alcohol problem? Is it considered normal to drink a fair amount on social occasions?

Yes, Another Round naturally comes up when talking about our short. The two amazing editors of Another Round, Anne Østerud and Janus Billeskov Jansen, helped us a lot in the editing room, and we had some good discussions about the different psychological stages of being drunk. For our film, it was very important to show how much it affects your kids when you have the need to drink like Lars or the four men in Another Round. But the most interesting and important thing for me as a writer and director was to explore why Lars starts drinking. Because the sympathy lies in his need to drink.

It was important to establish the social difference between the two families from the beginning of the film without making them into one-dimensional characters.

In Denmark, it’s very common to drink a lot. And from a young age as well. Almost everyone starts drinking when they’re around 15 years old in Copenhagen. And regarding your question of if it’s a problem – I would say it’s complicated. Some of my greatest memories come from nights out drinking, but it’s a balance and for some people very tough to handle. I think it becomes a problem if you need it to have fun or use it as a tool to distance yourself from reality. Sometimes it can even be perceived as rude to say no to alcohol due to people thinking you’re not invested in the specific occasion. That’s a problem. And makes it so much harder for a guy like Lars to stick to sobriety. 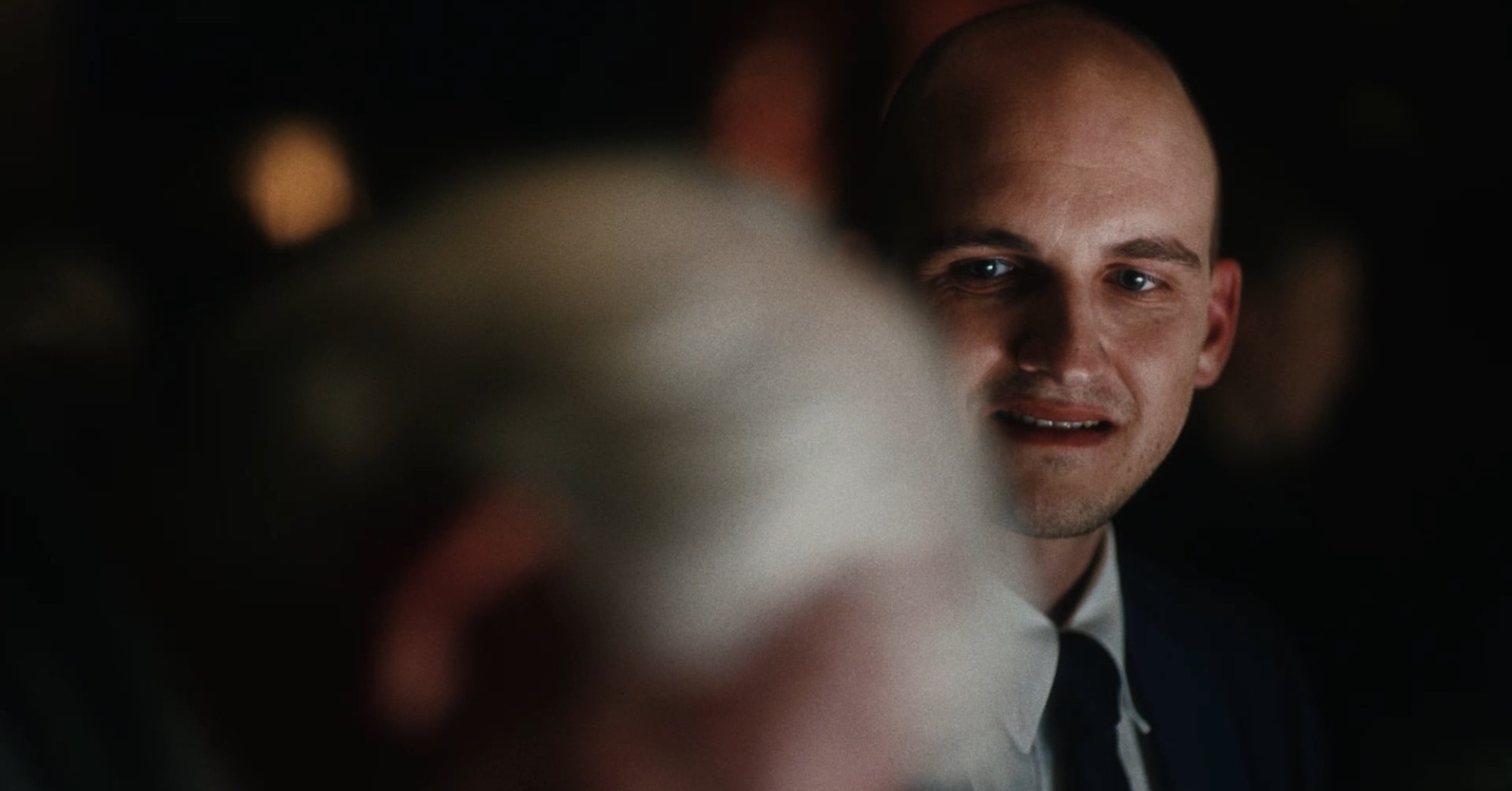 The dinner setting feels so constricting and claustrophobic, with so much dark space and tight shots. Tell me how you wanted to approach the film visually to create this sense of restriction.

The idea was to have the audience up and close with the characters and give it a sense of ‘being there’. We knew it was going to be the six characters sitting and talking for most of the film, so we felt that the progression of the evening would benefit from a handheld camera, that could observe and respond to the characters – especially our main character, Lars.

There are a lot of subtle details and things Lars notices that make him respond in a downwards spiral. The free camera reacts to those subtleties, ‘points them out’, and carries the audience in that way, while at the same time making it more claustrophobic and hectic. Succession was a big inspiration for the visual style of the film, and movies like Lars von Trier’s Melancholia. Both use a more freestyle, handheld camera that follows the characters and reacts, while still feeling like a beautiful restaurant, something that Lars is overwhelmed by.

I’m sincerely very grateful for our superstar DOP, Tobias Scavenius, who really had a clear vision from the start and not only understood the manuscript but also influenced it big time. He’s been such a gift for me and he’s probably the reason why I don’t go down with stress in pre-production. We use a lot of time making sure that we are 100% in sync before the first day of shooting, which saves us a lot of time on set. We used a two-camera set-up and used the Alexa Mini LF as our A camera, Sony Venice as our B camera, with Zeiss super speed lenses. So, in our grading process we had to match our A and B footage, but luckily, we had the talented colourist Hannibal Lang from BaconX in charge of the grading process. 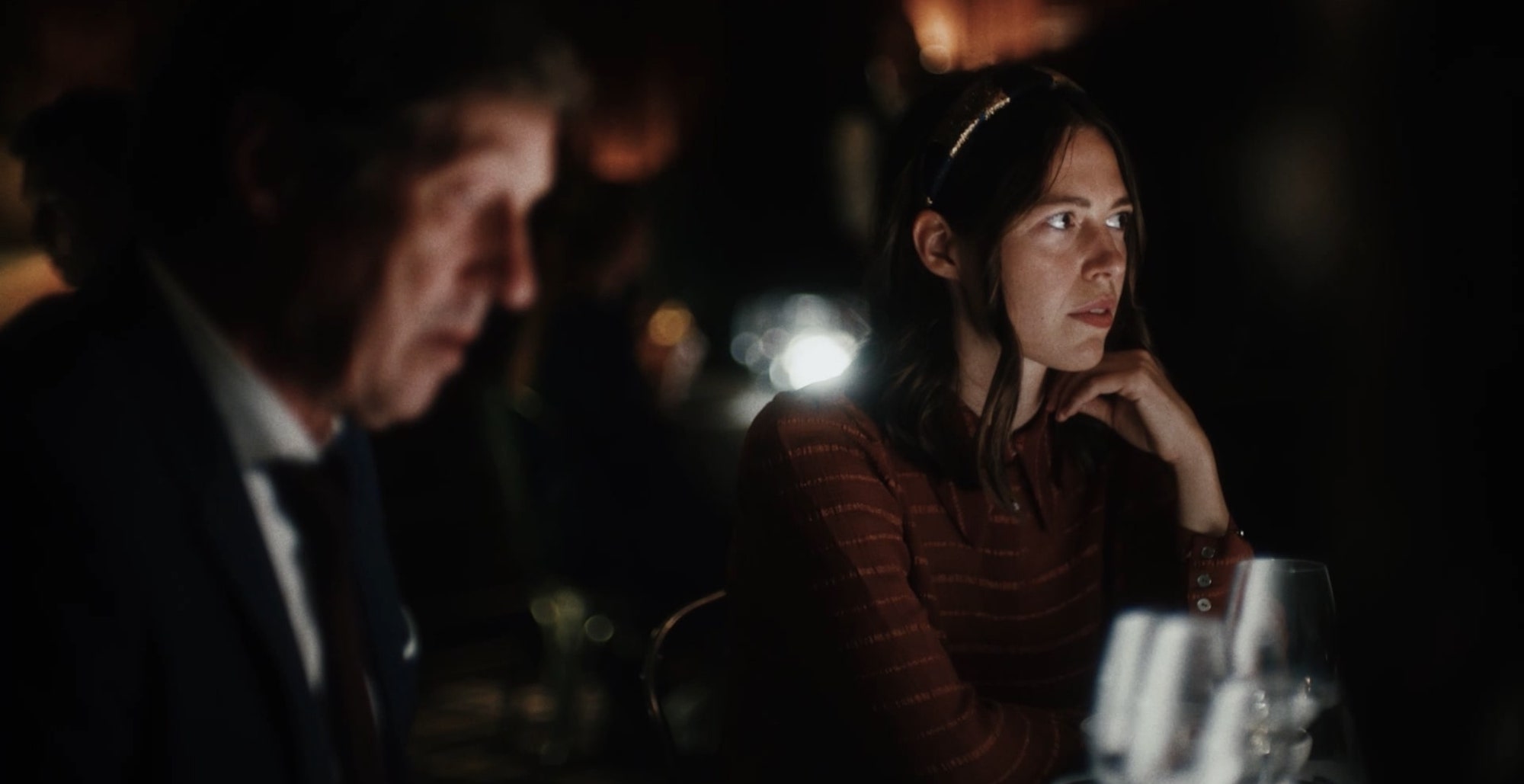 I loved the speeches and the games – pulling ugly faces and pretending to cry on command. Were these something you invented or took from real examples?

This film is based on my own experience, but it’s modulated into fiction. Pulling ugly faces was something my own in-laws found amusing which I simply hated. Not because it wasn’t fun, but because I didn’t feel comfortable doing it, which made it so awkward for me. It was important to work these emotional challenges into the script, so we could get Lars out of his comfort zone. Because one of the biggest points of the movie is that Lars really wants this night to succeed but his lack of social skills destroys his wishes.

The crying part was pure fiction. Søren Malling and I didn’t rehearse the bit before we shot it. I’d rather see his take on it and then direct from that point. We’d talked about the structure of it and the character’s motivation to do it, but from there it was Søren’s own interpretation. It was important to me that he understood the narrative arc of the little sequence. Going from humoristic as a party trick to escaping into his own universe where he’s honest and using it to get all the night’s tensions out of his body. Suddenly, like a magician he jumps out of his real emotions when he yells “cheers”. And just like that, he’s back to his façade.

One of the biggest points of the movie is that Lars really wants this night to succeed but his lack of social skills destroys his wishes.

You also create this sense of awkwardness through pauses and glances and passive-aggressive comments and these types of things. What’s it like trying to create this? Was it all written into the script or did you work a lot in rehearsal?

Actually, a lot of people have asked me if there was a lot of improvisation. There was some but not as much as you would think. A lot of the pauses are written into the script in which I point out specific places where I want to have insanely long breaks and looks. This way, I can always compress the beats in editing, but it’s a problem if it’s the other way around. The great director, Michael Noer, taught me an effective method when it comes to this and it’s called silent takes. The cast play out the whole scene without any dialogue. That’s a big help for the editing process because you have the freedom to extend any moment.

I said to all of our cast members that the script wasn’t like an IKEA assemble guide where you need to get every step right to succeed. The important thing for me was that they knew the essence of each scene and their individual motivation. I always try to come home with a lot of variations of each action instead of searching for something sublime. 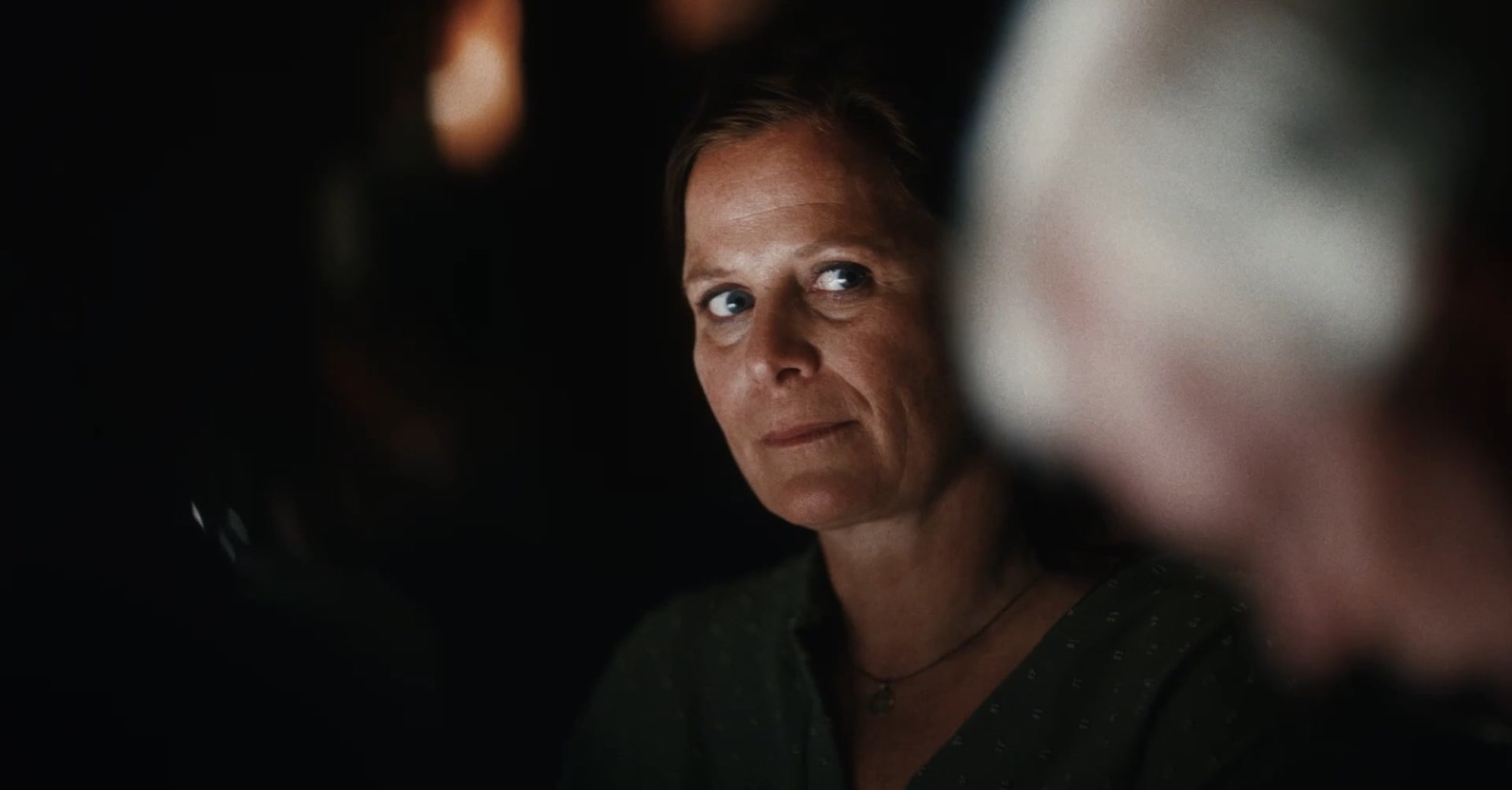 The cast is uniformly excellent. What was the casting process like? Were you looking for specific types or did you have a cast in mind?

I always knew my number one priority was to get Søren Malling as the character Lars. I had him in mind all the way through, from the beginning of the writing process to the end. Lars needed to be someone who naturally draws sympathy but at the same time possesses the ability to be brutal and intimidating. Søren was the first cast member I reached out to about this project – I told him that I had kept him in mind from the beginning and I could only imagine him for the character… but no pressure! Luckily, he liked our script and wanted to be a part of it. I’ll always remember him for this because as soon as he was on board the project got a stamp of approval.

The important thing for me was that they knew the essence of each scene and their individual motivation.

Regarding the in-laws, it was important to find somebody with a natural authority and confidence. Someone that could have a sense of superiority without doing too much. You know those types of people who just naturally take the room. Whereas the character Susanne needed to be someone who had that motherly, down-to-earth charisma but easily felt inferior to the other parents. The son Frederik needed to be edgy and kind of two-faced. On one hand very likeable but at the same time a bit disloyal to his father. Then we have Ida who I’ve always envisioned as warm, caring and observing. She might be the smartest person around the table as she notices that Lars needs support and therefore tries to be his best friend on this specific evening.

I’m writing my first feature film which is inspired by this short. It goes deeper with the theme of social anxiety as an uncontrollable illness that can prevent people from achieving their dreams – an illness that is easily misunderstood as selfish behaviour resulting in hurting their immediate surroundings. Many people never reach the core issues as to why people around them disappoint. They ask too few questions and therefore only scratch the surface of the problem. I really hope the project, like our short, will promote the narrative of good people challenged by their inability to cope with their insecurities by sparking thoughts about what triggers the behaviour.