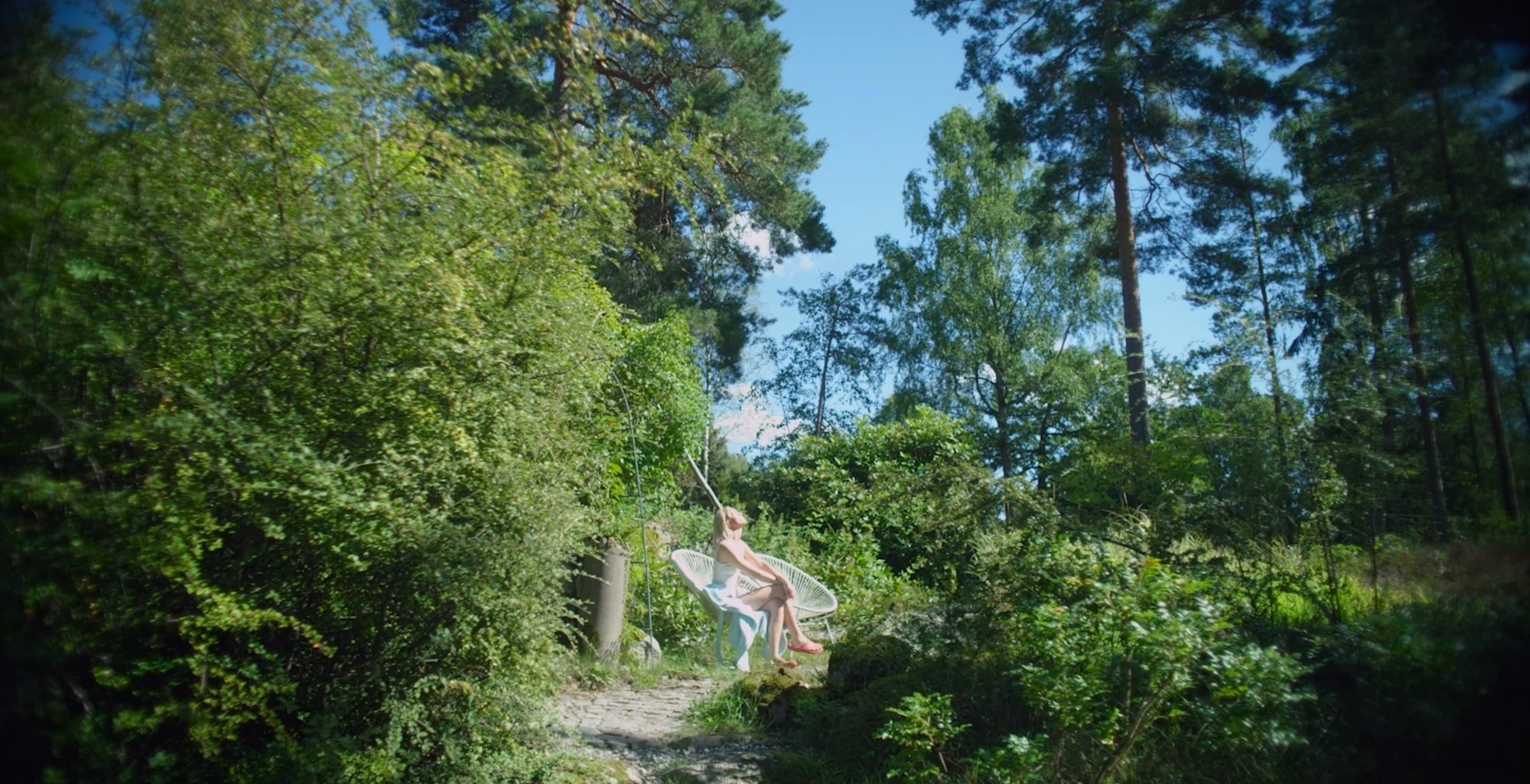 Still Life opens with a highly unusual proposition. Instead of demanding our attention right from the beginning – a method a lot of filmmakers use in order to grab our attention – simple text overlays state that this is a film one can watch while on our phones, doing the laundry, or cleaning the dishes. It is an odd but strangely effective approach for this slow and contemplative film, simply observing a young woman in a country house in Sweden taking selfies and waiting endlessly to speak to a customer service hotline. The first film in a proposed ambient anthology television series, Kevin Luna’s film is an enigmatic, fascinating experience, bolstered by its long takes, clever use of dialogue, and an almost unsure tone, a suitable match for its adrift characters. Premiering here today, we talk to the Luna about leaning into our attention-deficit culture, being inspired by the rhythm of Tarkovsky’s Mirror and his hopes for a wider series.

The film was shot in the Swedish countryside. How did the landscape inform what you wanted to say with the movie?

I started with the landscape actually. The location in the film was where we were staying last year. My wife inherited the property so I had been sitting in that location for the whole summer last year and thinking about how I could shoot something there. It’s very picturesque and good for some kind of scene. And I guess It’s kind of personal in a way because I lived out there for several years before I moved to California. So it’s a bit haunted by my past.

It was attempting to find a frame where just the frame itself feels alive.

The opening is very brave, with the text directly saying you can watch this film while on your phone or doing the dishes or the laundry. Did you always want to create this film with distraction in mind? How did you want to work that into the storytelling itself?

That’s kind of the whole concept. This particular film is a proof of concept for a series of films with the same idea that you can put them on in the background. With the way streaming has entered our lives, and the way that we watch and consume things so much, I just felt like there was an opening for what is basically slow cinema.

You could kind of take the aesthetic or the language of slow cinema and make it into something accessible because many people have things on in the background. So much content is designed to get your intention immediately, so I felt like it could lean into having something on in the background and then as a result that the audience can enter into a scene from a different perspective and have a different narrative expectation. 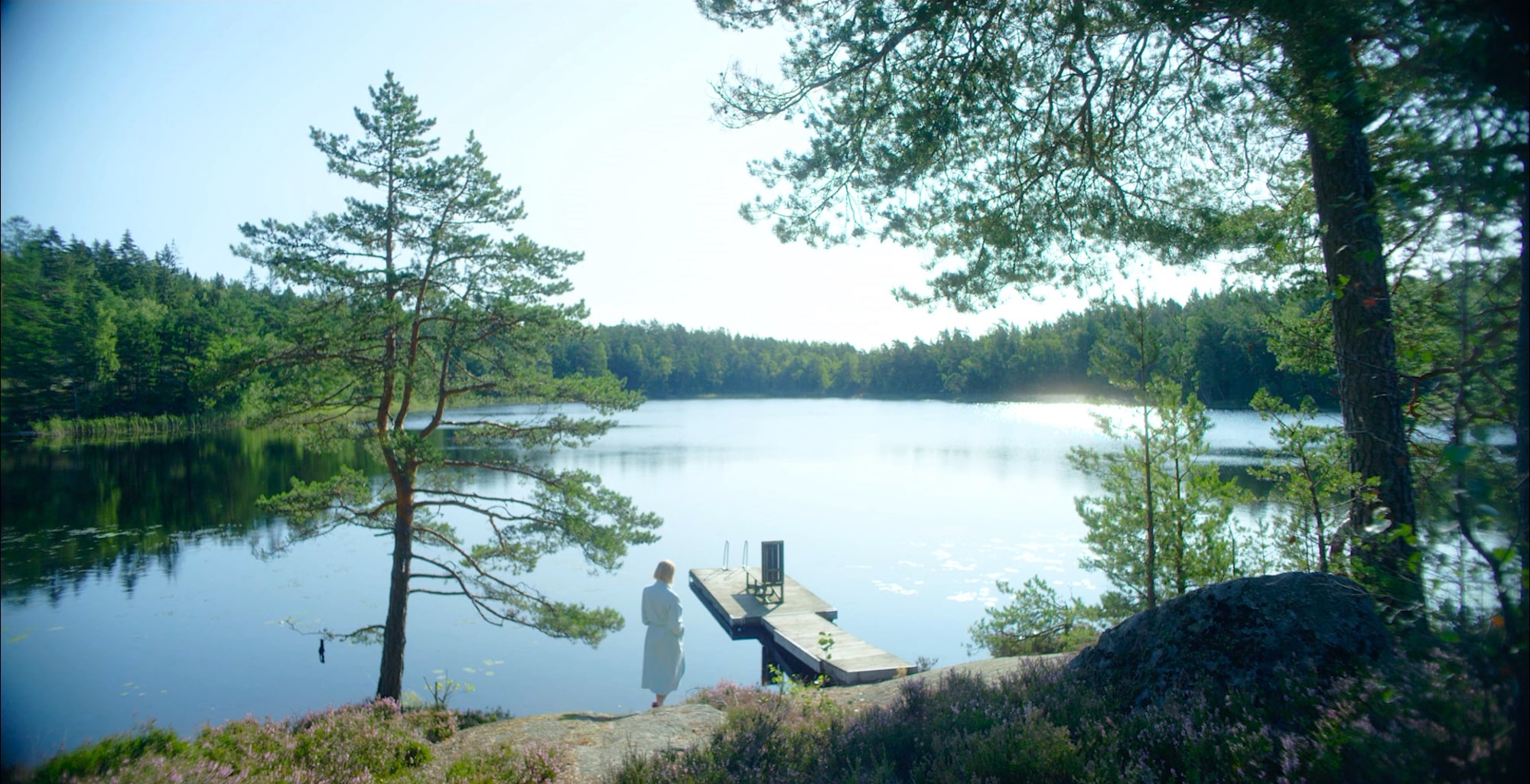 It’s interesting that you say it’s a pilot for a TV series, because on reality TV on streaming, they do kind of repeat the same points over and over again, so if you are not concentrating, you can still follow the plot. But Still Life has a very different approach. I’d love to know how it works as a pilot, and also how this will be expanded.

As it stands now, it’s written as an anthology series. I’ve written a handful of other episodes and actually just shot one last month in LA. The idea is that if you prompt an audience and really set the stage, like “Hey, this is something slow to put on in the background”, then there’s a greater chance that when something does start happening they might start paying attention. Maybe it’s easier to get their attention if you tell them “don’t pay attention.” In one way, I’ve written it so it’s not so important that you understand every moment of the plot; it’s more like everything’s written so you might ‘overhear’ it. That’s the perspective that I’m trying to create: everything that happens in the film is something that you might see or overhear from afar. It’s not necessarily the most important or dramatic moment in someone’s life. It’s more that maybe the way that people talk in these awkward or nervous moments is interesting.

I’ve written it so it’s not so important that you understand every moment of the plot; it’s more like everything’s written so you might ‘overhear’ it.

And it makes sense as it does capture life in stasis, quite literally with the metaphor of being on hold. How did want to approach this visually?

For this particular episode, for the dialogue scene, when the neighbour comes up, I had the opening scene of Andrei Tarkovsky’s Mirror in mind, just in terms of how I wanted to shoot it. Not trying to think about any significance or meaning from that movie but rather my memory of watching that scene. I was trying to get that kind of pace and find a slowness so you could exist in the space.

I’m trying to create these very ambient, but still narrative frames. Sometimes when you’re shooting and you’re getting the shot ready and the camera’s just sitting there on standby I’ve had this experience where you look through the frame and it’s really nice. Without something even happening it’s really alive and sometimes I just want that. That’s probably going to be better than whatever dramatic scene I was going to shoot so it was attempting to find a frame where just the frame itself feels alive.

And helping to create the ambient vibe is the ambient music. Tell me a little bit about how you collaborated with your composer?

So the music is by an old friend of mine who I went to high school with. The actual track sounds nothing like what’s in the film. I had a temp track in there for a while and then I got really tired of it, so I was looking for another temp track and found this little beat he had made. I remixed it and slowed it down. I don’t know how to remix things but I did a bunch of stuff to it and it kind of worked. So it was kind of a happy accident. A lot of things in this film were happy accidents.

As I start to write the dialogue, I just let the characters go and see where they go.

What did you use for the long takes in the film? What equipment did you have?

We had a dolly and we shot on a Red with D-speed lenses, which was really nice. I’ve worked with Cinematographer Josh Aylett a lot before. He’s an old friend. I was in Sweden last year for three months and I spent most of it writing a feature film that I very unrealistically thought I could write and shoot very quickly. Like I’ve done once before with another feature in San Francisco. I was hoping to catch that magic in a bottle again, but I didn’t get the money. I still wanted to shoot something with the cinematographer so I wrote that I had this slow film concept milling about, and we just sort of did it. Josh the cinematographer and Francisco Imoda the gaffer took over and I trusted them to handle it.

There was one line near the end which seems to really open the film up, concerning the idea that people are the same everywhere. I just returned from a long Eurotrip and I’m starting to think the same myself. Maybe I should get out of Europe, but it definitely resonated. Is this something that you felt yourself when moving between USA and Sweden? To me, it feels like the key to the whole film…

I don’t know. As I start to write the dialogue, I let the characters go and see where they go. The conversations just start happening in my head, so that line surprised me as I wrote it. I thought it was a bit funny. I didn’t know if it was a little bit too cheesy or too much of a line so I tried to play with that a bit. I wasn’t really sure whether I, or she, should make a statement, but we did. I don’t know. That’s why I enjoy writing because things, at least with dialogue, often happen that surprise me that I don’t often understand.

I’ve shot a second episode or a second proof-of-concept for this series idea, and I’ll probably shoot maybe one more before the end of the year. The idea is to pitch it in L.A. And I have a feature script about Stockholm that I would maybe one day like to try to make.