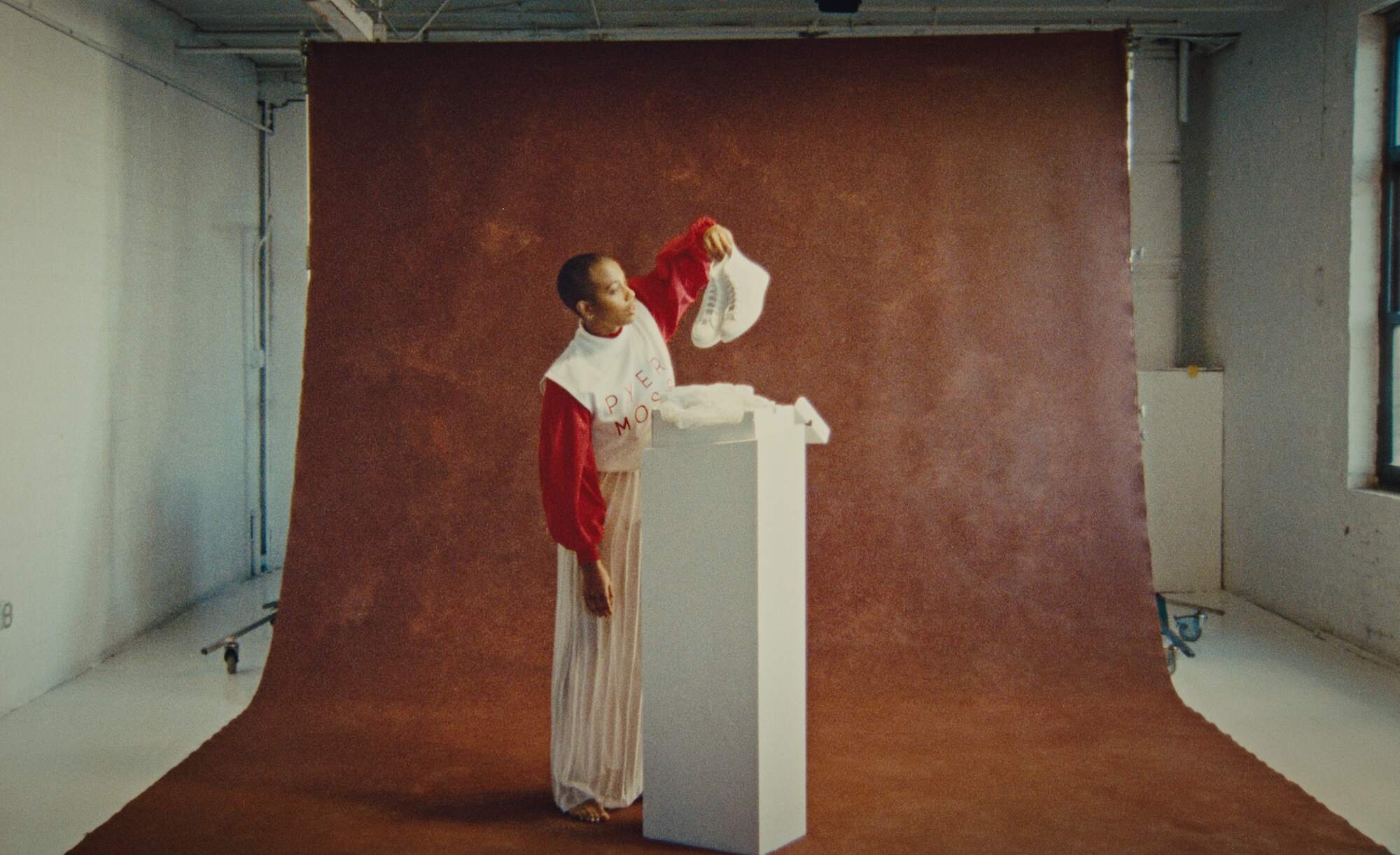 Despite only having a runtime of 59 seconds, Louise de Nexon’s spec ad Beyond Converse manages to convey an emphatic message about embracing the power of imagination. The film is centred around a few key images; white Chuck Taylors above a tall white pedestal, a pair of Converse submerged in a fish bowl, and a floor covered with a variety of individual colours and styles. Model Idalis Rideout populates these scenes too in a timeless dark, leather-clad look, and the combination of model and imagery together highlight the key message at play; these shoes are an enduring cultural facet for self-expression. DN spoke with the New York City-based director about her journey into commercial filmmaking, embracing the creative constraints she had to work within, and the process of collaborating with fellow filmmaker and regular Directors Notes alum Ewurakua Dawson-Amoah on the narrated poetry.

How did you first get involved in commercial film work and this project with Converse specifically?

In the fall of last year, I started talking to a few production companies about representation. I realized rather quickly that my portfolio was missing commercial work. I then decided to put together a spec. The idea to put my own money into a fake advertisement felt simultaneously underwhelming and counterintuitive. I wanted to pick a brand that would allow for my natural taste to come through, and mostly one I could be creative with. Converse has had ads where they burn their shoes. They felt overall very free with their products.

I wanted to pick a brand that would allow for my natural taste to come through, and mostly one I could be creative with.

How did that sense of creative freedom affect how you portrayed Converse, as a brand, in the film?

Trends come and go. The idea of what’s fashionable is contingent on generations, socio-economics or one’s definitions of themselves at a given time in their life. As we evolve as individuals, we change the way we look, the way we dress, and what we want it to say about ourselves. Over time, Converse has proven itself to transcend that emerging change. It no longer is the trend. Rather, it has become a universal, symbolic accessory, not only existing as a pop-culture artefact but becoming a vessel for self-expression. That’s what I wanted the video to capture.

What drew you to that central image of white Chuck Taylors upon a pedestal?

The spot was crafted to highlight Converse’s duality: its ability to simultaneously be a canvas for the artist, and the artefact itself. This idea of the canvas and the artefact gave me the first world of the video. A White Chuck Taylor All Star Monochrome over a pedestal – a graceful Greek Sculpture.

And what influenced the other imagery which follows that appreciative opening?

Every world that follows is meant to explore the range of possibilities Converse offers. The worlds live slightly outside of our reality, they are empowering, weird, whimsical, futuristic. The message is simple, Converse is boundless in its capacity to adapt itself. The shoes’ only limit lies in the imagination of whoever is wearing them.

Given the breadth of shots required, how long were you out shooting for?

This ad being a spec, we were a very small crew with limited resources. The entire spot was shot over a single day. I work very closely with my DP Zoë Simone-Yi. She’s my closest collaborator, and I think our long-lasting friendship allowed us to have very honest conversations about scale, compromises, and mostly how to best utilize what we had in the service of the film. 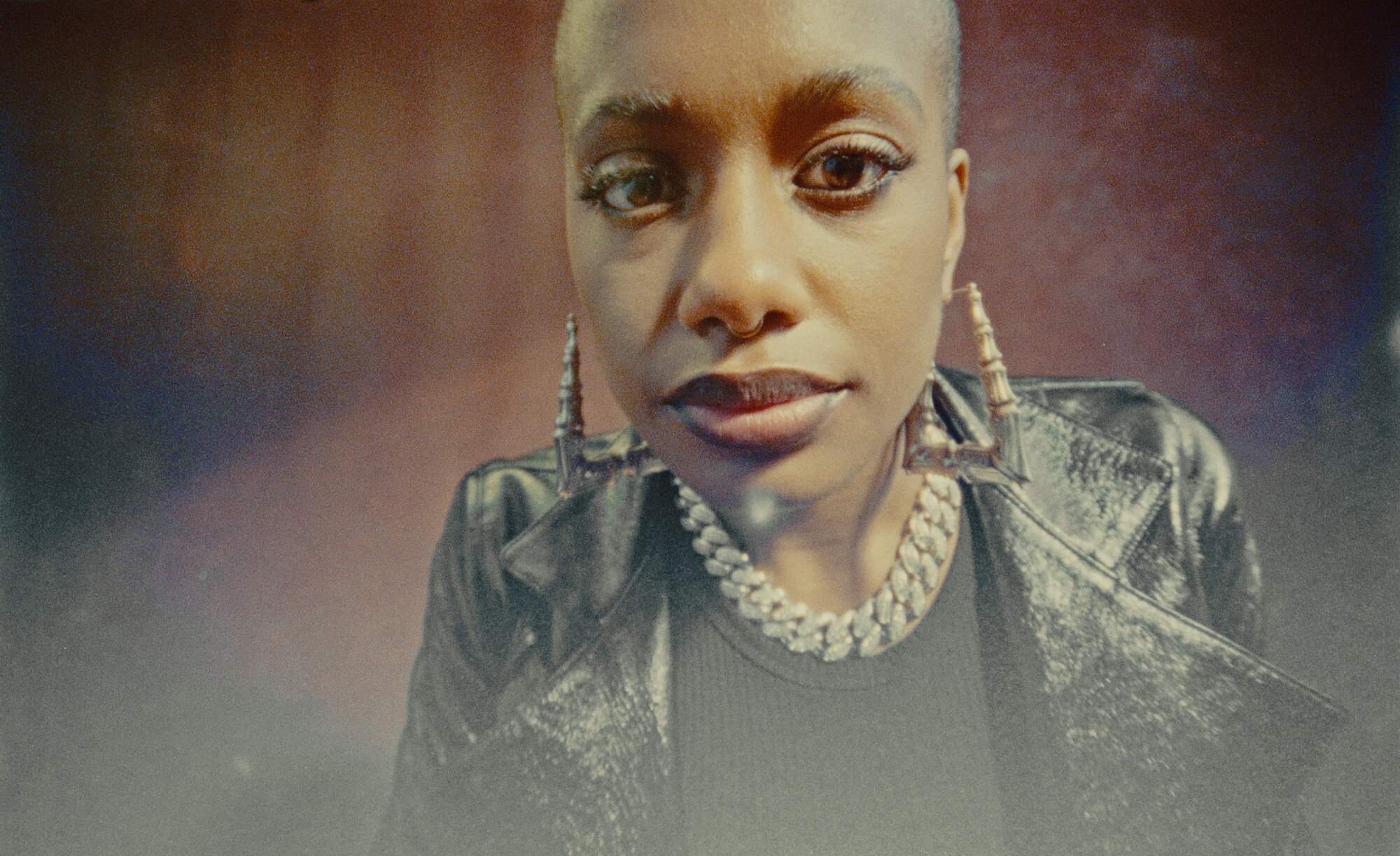 What in particular did you both discuss for this spot? Was shooting on film always on the cards?

In this instance, we knew we would lack the manpower and time to properly light the studio for each setup and have it be a polished look. The rest of the crew was comprised of a tiny collection of my most talented friends. The shoot itself was definitely a labor of love. Film being way more forgiving than digital, we opted for 16mm. We also thought this vintage look would fit the timelessness of the brand.

Who did you work with during post-production? Was the idea to have voiceover instilled from the beginning?

My post-production team was a dream team. I worked with old collaborators and new found ones. The process was easy. Blissful. I shot the piece knowing I wanted the soundscape to be driven by a voiceover about the process of creation in a free verse poetry world.

We also thought this vintage look would fit the timelessness of the brand.

I wanted to ask about Ewurakua Dawson-Amoah’s involvement with the poetry, she’s a filmmaker and artist we’re a big fan of here.

I had been following Writer/Director Ewurakua Dawson-Amoah’s work for a while and loved her poetry. At that time, the thought of reaching out to her to write for the piece had not crossed my mind, but I coincidentally met with her as I started post production, and the discussion about this collaboration came very naturally. Her writing for the piece is absolutely brilliant and I am genuinely in awe of the ways it both elevated and gave sense to the spot.

How did you navigate the sound and music which really do act in concert with the poetry voiceover?

I reached out to our Composer/Post-Sound Mixer/Designer Zak Engel. I specifically wanted the score and the design to be one, so was looking for someone who could do it all, think about the entire soundscape as a whole and be creative with utilizing SFX as music, and vice versa. Each world has to be very different, but the transitions feel seamless. Zak and I had a lot of fun shaping it all.

The message is simple, Converse is boundless in its capacity to adapt itself. The shoes’ only limit lies in the imagination of whoever is wearing them.

From start to finish, how long were you working on Beyond Converse?

I started thinking about the piece in October of last year. We were scheduled to shoot in December but had to push our dates twice because of the Omicron variant. Post-production took a while, mostly because of my limited resources. I was lucky enough to work with very talented people, and they were generous enough to squeeze me in the middle of other projects. Waiting for the perfect window for each step to happen definitely extended the timeline, yet taking that extra time allowed for this piece to come together in ways that defied my expectations.

What’s next for yourself? More commercial work or something more personal?

In the immediate future, I’m directing a music video with a very exciting rising artist. I love shaping music videos or content that’s generally related to the musical world (i.e. music docs) and hope to keep on getting those opportunities. Then, overall, getting to a place where I’m comfortable commercially and fully working in that sphere is a big goal of mine for sure. That goal is also financial, so I can have more resources to develop my personal projects.