“Loser, Geek, Nerd, Weirdo”….whatever the label may be, the “Outsider” has become somewhat of a stalwart character in independent cinema. From the early beginnings with Sissy Spacek’s tormented teen in Brian De Palma’s Carrie and John Hughes’ collection of misfits in The Breakfast Club, the “Outsider” has continued to feature heavily in some of our big-screen favourites.

Whether it’s the power these characters have to elicit emotion from an audience or the heart-breaking agony/joy of watching them rise/fall (delete as appropriate), there is something magnetising about these types that keeps pulling the writers and directors back to their worlds.

The latest writer/director team to tackle the story of the high-school loner is Patrick Dewitt and Azazel Jacobs (Momma’s Man), with their film Terri; the tale of a downtrodden, overweight, pyjama-wearing teen. Terri (Jacob Wysocki) doesn’t excel in school, he constantly turns up late for class, doesn’t participate in physical education and generally looks disinterested. His home life isn’t much better, with his parents absent physically and his guardian, uncle James (Creed Bratton), absent mentally, Terri is left pretty much to fend for himself whilst also struggling to care for his unstable uncle and their untidy home. With the help of his overzealous principle Mr Fitzgerald (John C. Reilly) and some burgeoning relationships, Terri tries to find his place in life and starts to discover friendship and romance. 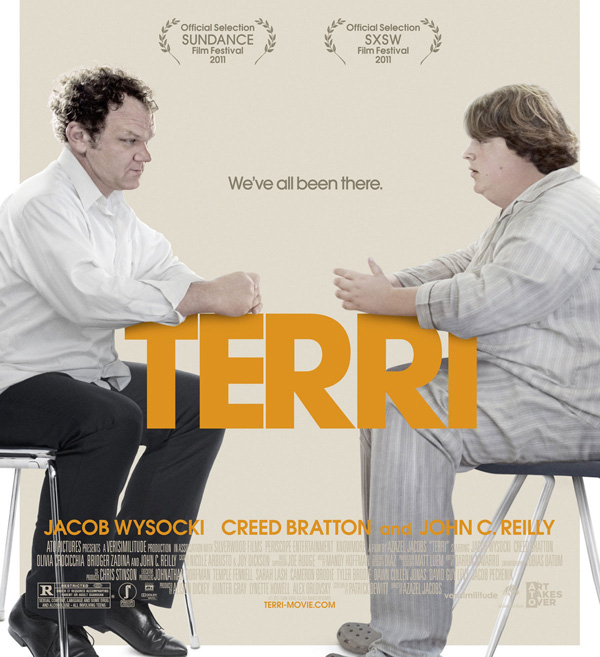 Jacobs’ film saunters along at a leisurely pace, providing a balanced snapshot into the life of its eponymous lead, never aiming for the big reveal or the grandstand finale. Instead, sexual advances are spurned, relationships left undefined and friendships undeveloped. Terri’s life simply carries on with an endless road of possibilities unfurling under his unwieldy gait, an uncertain future on his horizon.

In his first feature film role, Jacob Wysocki as the titular Terri puts in a performance that defies his tender years, as his introverted, cautious character skirts the pigeonholes he so easily could have fallen into. Persecuted by classmates and often misunderstood by his seniors, Wysocki’s portrayal could have all so quickly become one-dimensional and flat. Instead, our lead performer allows the odd, fleeting glimpse into the soul of Terri, adding mystery and depth to his character, ultimately leaving us with the desire to know more.

Terri is the story of an outsider, in a world of outsiders. He may be at the heart of Dewitt’s story, but with a host of other dysfunctionals populating this on-screen world, Terri doesn’t seem so odd or awkward. With a principle who sleeps in his car, a friend who gets fingered in class and a classmate who pulls his hair out and pisses on his trousers, our protagonist’s eccentricities suddenly seem muted and unremarkable when viewed in context. This isn’t a film of cheap laughs, or one overly concerned with sympathy. Our cumbersome hero could have so easily been turned into an object of pity, but instead Dewitt and Jacobs handle his story with great care and consideration, avoiding narrative clichés and shallow stereotypes along the way.