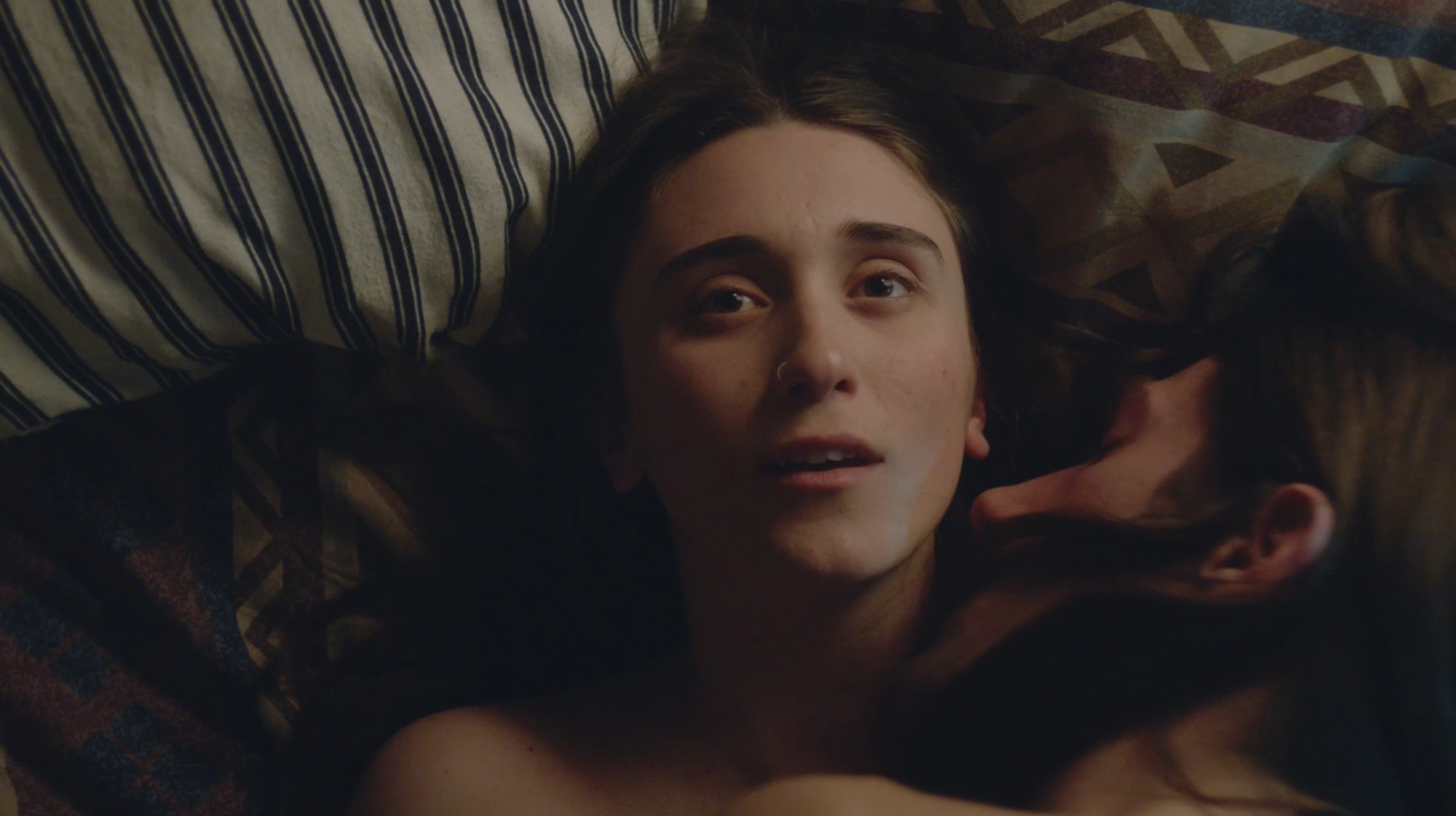 What inspired you to create a film about this widespread, yet very much underdiscussed condition?

The concept of Debbie Does Dilators was inspired by my own experience with vaginismus, a condition affecting an estimated 1 in 10 people who have vaginas, which causes a painful and involuntary contraction of the pelvic floor muscles in response to penetration. Despite how common the condition is, it’s seen virtually no representation in mainstream film and TV and isn’t discussed in general.

It took me several years, multiple dismissive and unhelpful doctors, extensive internet research and a dramatic misdiagnosis to finally be diagnosed correctly with vaginismus by the doctors at Maze Women’s Sexual Health in New York. The ignorance of the medical community, and society in general, to this condition is a symptom of a larger problem – stigmas surrounding the sexual experience of anyone who isn’t a cisgender, heterosexual man, and the fact that we are conditioned to prioritize men’s pleasure over our own.

It wasn’t my goal to evoke pity in the viewer, but empathy.

After my treatment I decided to speak out about vaginismus in various media publications and received messages from women all over the world, detailing their own experiences – their inability to get treatment due to their location or financial situation, seeking advice for telling a parent or partner, or just expressing gratitude for speaking publicly about my experience. It was after hearing from these women that I knew I wanted to make a film about this underrepresented issue. If awareness is spread, those experiencing it will feel less embarrassed or ashamed of talking about it will have the confidence to seek treatment, and medical professionals will be educated and able to provide the care they need and deserve. In Debbie Does Dilators, I aimed to bring awareness to vaginismus and to portray sex authentically and from a woman’s perspective.

Was it immediately clear that humour would be an essential component of Sara’s journey? How did the script develop?

In the early stages of writing the script, I struggled to find the right context in which to depict a character with vaginismus. It was important to me that the film would be somewhat comedic, not some sob story about a girl who can’t have penetrative sex. It wasn’t my goal to evoke pity in the viewer, but empathy. I knew the topic would be more digestible, too, if it was portrayed with humor. 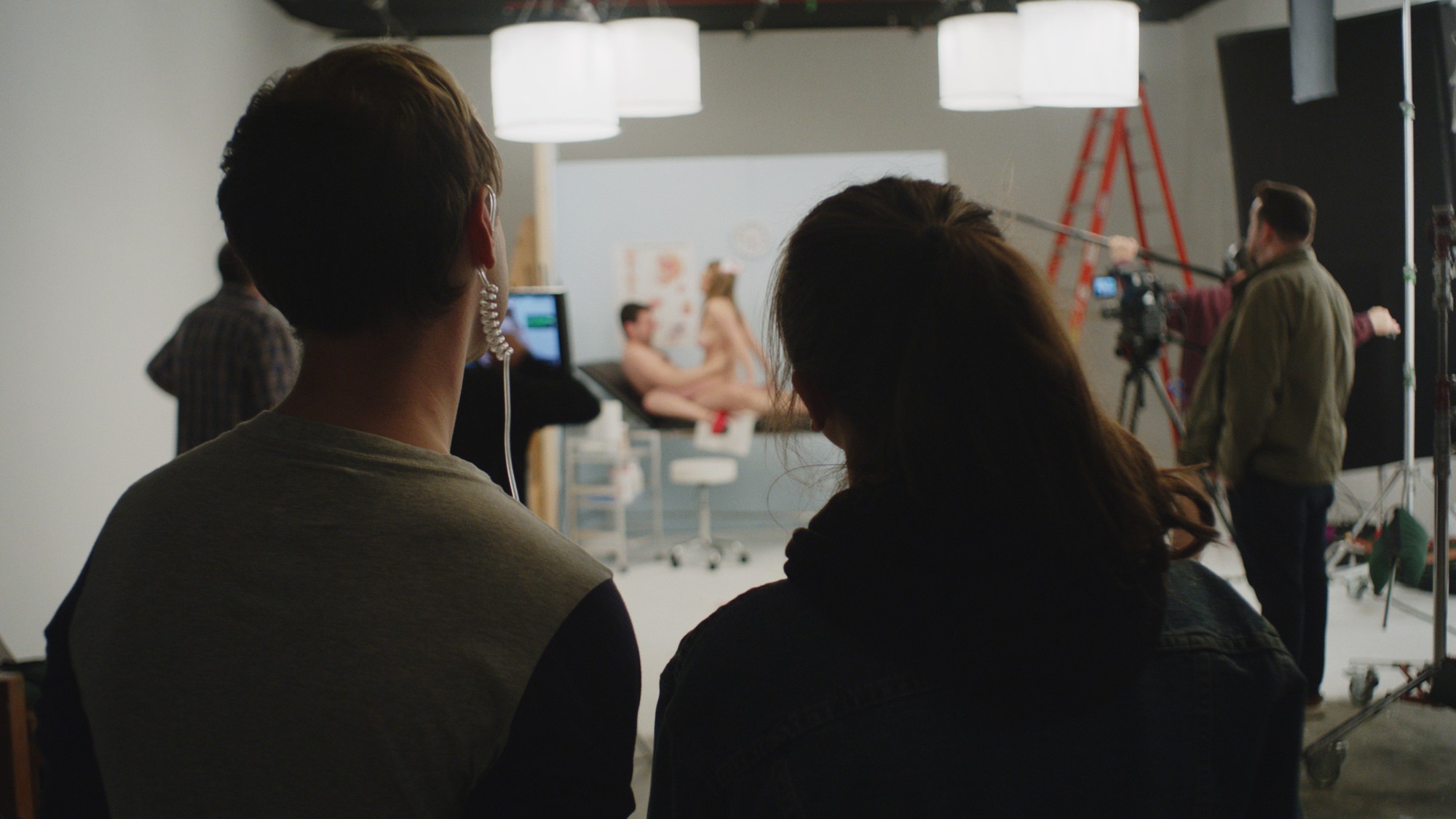 In the hookup scene, I pulled a lot of inspiration from my experiences revealing my condition to past partners. I’m bisexual and have experienced negative reactions to vaginismus from partners of all gender identities, but it was important to me that my main character in this film be straight, as the revelation of the condition tends to be the most dramatic within straight partnerships due to “sex” in heteronormative society being defined, literally, as penis-in-vagina penetration.

About three-quarters of the way through the editing process of the script, I was graciously awarded funding for the film from the clinic I was treated at, Maze Women’s Sexual Health. In writing the exam room scene, I consulted the medical team at Maze to ensure it was accurate. They also connected me with other patients with vaginismus, allowing me to gain others’ perspectives and experiences with the condition and work those into the script. It was so awesome to have Maze’s support throughout the process of creating Debbie Does Dilators – without them, the film would not exist. 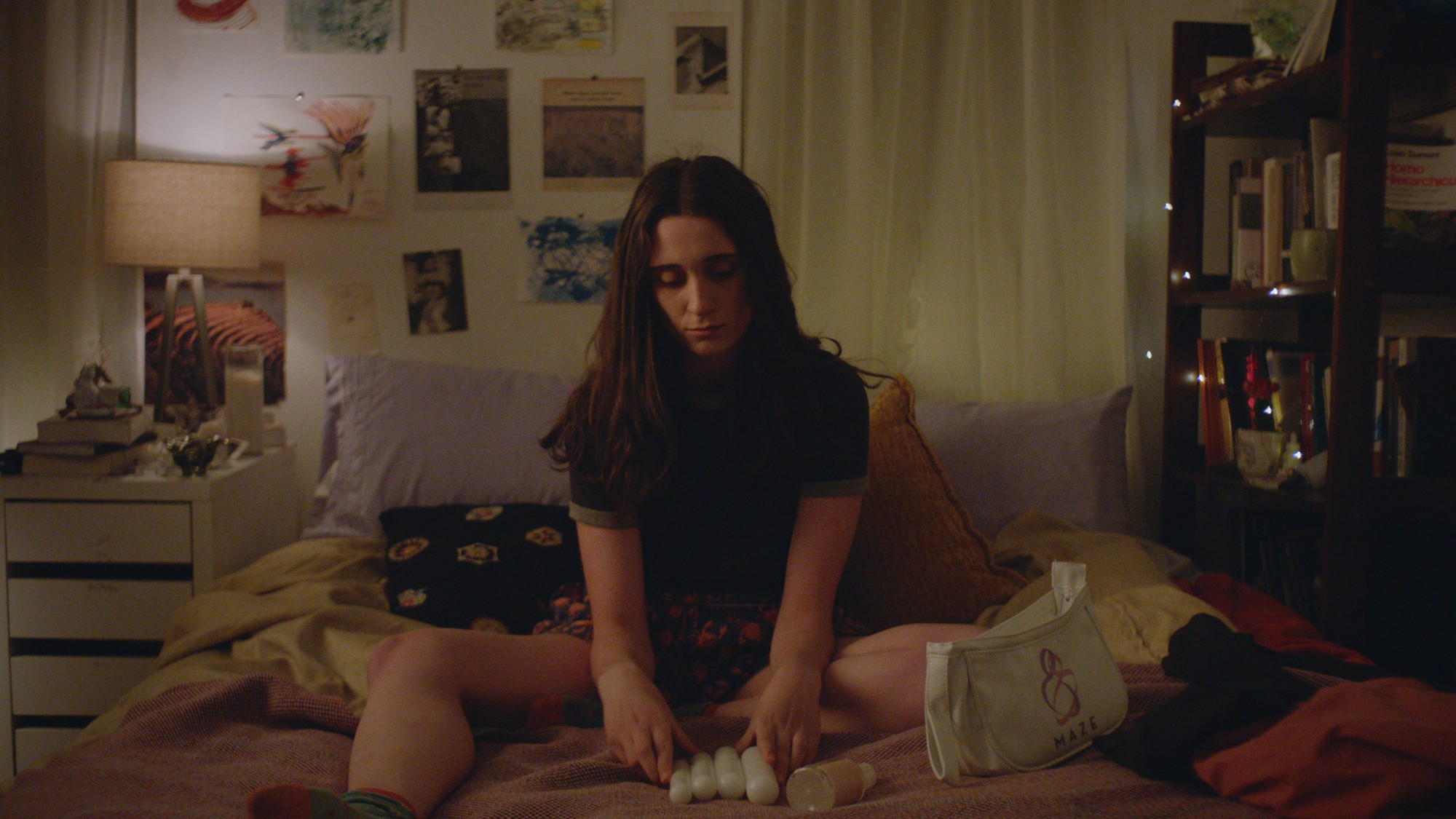 Kylie Zimmer delivers a fantastic performance packed with subtle shifts of emotion, how did you find her and the rest of your cast?

Of course, the most important casting decision was the main character, Sara, played masterfully by Kylie Zimmer. Kylie’s involvement in the project turned out to be serendipitous. I’d asked James if he knew anyone in the acting school he attended who might be a good fit, and he suggested Kylie, so I invited her to audition. She nailed the character for me, and I offered her the role. The first time we met up to go through the script together, she revealed that she’d been struggling with symptoms of vaginismus for a while. I was stunned – it was incredible, and a testament to the commonality of the condition, that the actor I’d found by chance and ultimately cast in the role actually had vaginismus. Kylie did an impeccable job and I am so grateful to have had her star in the film – it’s like the role was written for her!

Debbie Does Dilators opens and closes with a top down view of Sara, could you tell us about the intention behind that framing device? 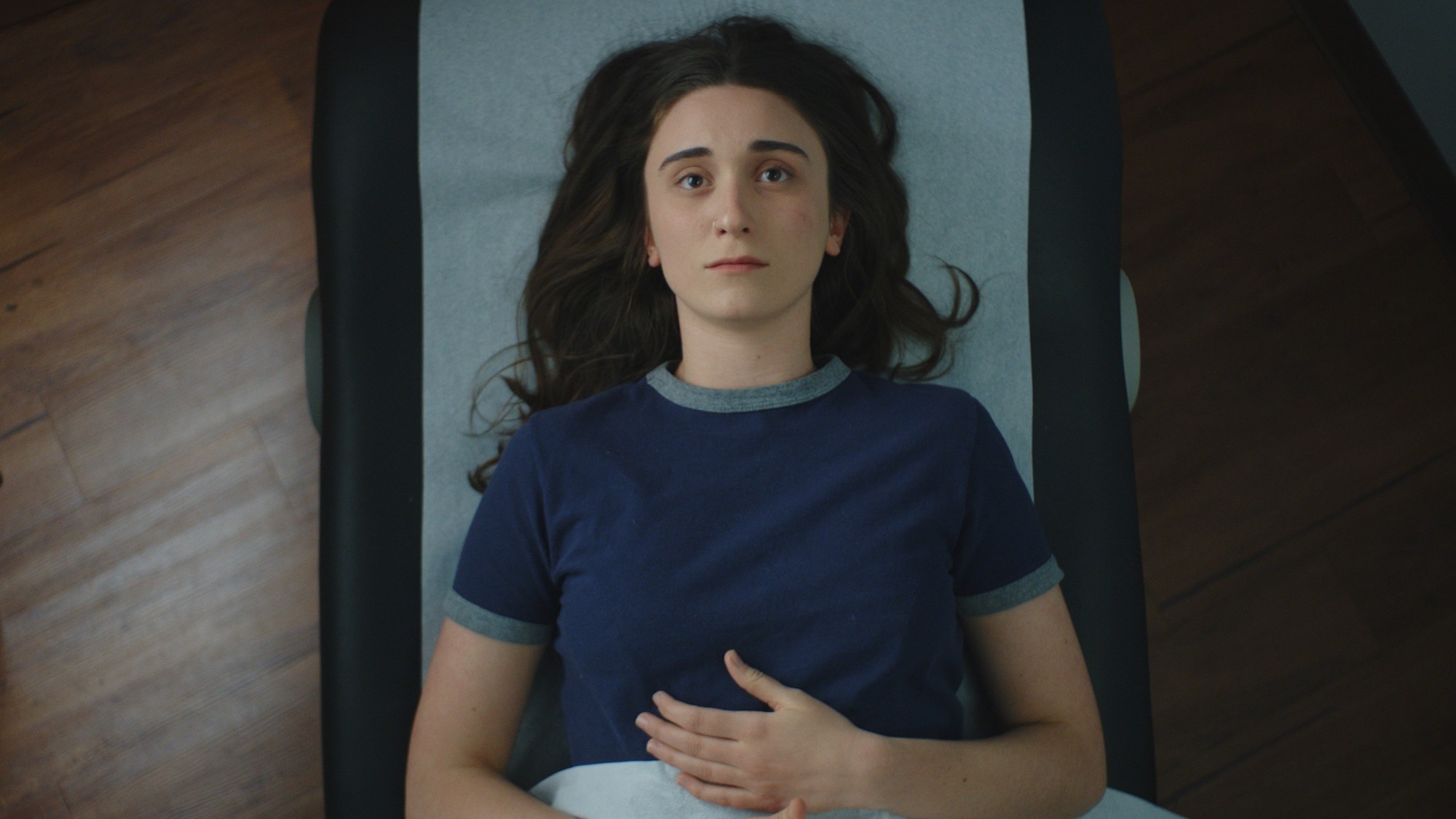 When the script was nearly finished and I needed to start assembling a production team, I knew I wanted the crew to be comprised of non-men. This was due to the subject matter of the film, the sensitive nature of the scenes we needed to shoot, and my desire to prove that women and nonbinary folks are just as capable of running an efficient and professional set as men are – the gender disparity within the film industry is so nonsensical. It was especially important to me that the director of photography be a woman to ensure a female gaze. I was really fortunate to bring Maria Rusche onto the project as DP. Her expertise and skill are immense, she brought on a great team and together we were able to perfectly match what I’d been picturing in my head throughout the writing process. She was also just really passionate about the subject matter, sharing with me what is now one of my favorite articles on the internet – The Female Price of Male Pleasure by Lili Loofbourow (check it out!). That was really important to me given my vulnerability in this project.

It was especially important to me that the director of photography be a woman to ensure a female gaze.

The editing process was grueling for me, as the first cut of the film clocked in at around 20 minutes and I’d intended for it to be closer to 10. Luckily I had a really great editor, Nona Schamus, who I totally put through the wringer with my hesitation to let go of anything. Eventually, they convinced me that several changes were needed for the sake of the pacing of the film, and once I obliged I knew they were right. This is why I shouldn’t edit my own films! I’m not an editor; I’m so attached to every nuanced moment that pacing goes out the window when I’m editing my own stuff. Nona did an awesome job chopping up the film and getting down to the bone of what was really necessary to carry the story – an imperative skill when editing a short. We even cut out an entire scene. They truly made the film what it is, and I’m so grateful for their patience and talent.

Overall, the entire process of creating the film took a little over a year – six months of writing, three months of preproduction, and four months of post-production. Then, we were on the film festival circuit for about a year. It feels so good to finally release it on the web where it can reach the widest audience.

As a filmmaker also involved in curation what aspects do you look for in others’ work when making programming decisions?

First and foremost I look for authenticity. I am most interested in stories that feel very real and raw and come from a personal place. To me, vulnerability is powerful in art of any medium, as it allows the viewer to form a stronger and more personal connection to the piece and the artist themselves.

I am most interested in stories that feel very real and raw, and come from a personal place.

I think it’s important to let people tell their own stories, as well. There are a lot of people capitalizing off the personal narratives of queer people and people of color right now, who have never and will never experience the oppression these groups face and are not involving anyone who has in key writing or production roles. This leaves a lot of room for misrepresentation and exploitation, so I’d rather elevate the voices of those who are speaking for themselves. In general, I look for films that explore underrepresented issues or films that approach a familiar subject in a clever and unique way. 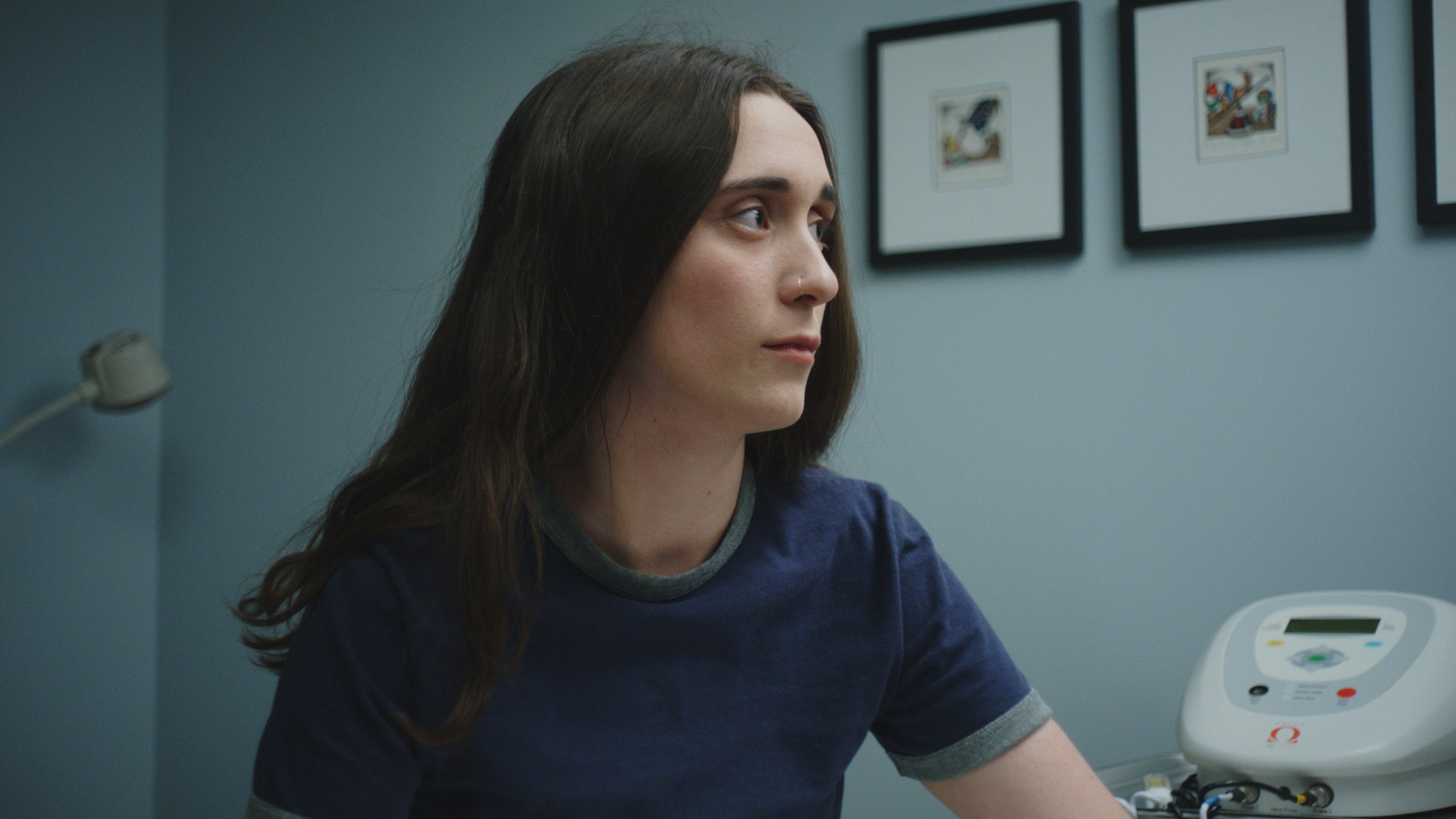 Right now I’m focusing on starting a screening series in Oakland, California, where I live. When I’m on the festival circuit, I see so many incredible films that never get widely distributed. Shorts in particular – most of them just don’t get screened beyond festival shorts programs. I find so many great ones online, too, when I’m looking for references for my own stuff. It’s my goal to share the films I think deserve to be screened outside the film festival realm, and make them more accessible to a different type of audience.