A son learns about the failures of adulthood the hard way when tasked with walking his dad home after a drunken night out. An elegantly handled two-hander, it boasts great performances from its two stars Kyle Gordon and Cameron Jack. We were particularly taken by the film while watching it at Glasgow Short Film Festival and picked it as one of our favourites of the bunch. Today we talk to Director James Price about the film, recreating a real night out with his father, and making it as authentically Glaswegian as possible.

What inspired you to tell this story?

It had roots in a real night from my younger years. My mum and dad had an argument, I was in the back seat of the car. My dad punched the windscreen and cracked it. I think he had a bag with a hammer in it, but in my young mind I thought he just punched it and cracked it. My mum ejected him from the car. He was pretty drunk. He didn’t drink much so it was a rare occurrence. I walked him home. It wasn’t really that eventful a night. I actually got a day off school the next day, which was quite cool. I had quite a happy night, but it always stuck with me, then in 2015 I thought it might work as a short film. The first thing I had was this image of me guiding dad home, which was very rare because he was usually protector.

My dad was a much cooler, funnier and nicer guy that the character in the film.

Did you want to capture this strange moment when you realise that one of your parents is just as vulnerable as you are?

100%. My dad was always my hero. He passed away in April. We were really close friends, more like best friends than father and son. I’ve never met a father and son who were like us. It’s interesting because it’s the first time you realise they’re human. My dad was a very, cool beloved character in Springburn, where I’m from. He always had this cool, almost mythic vibe about him. I think that was one of the first points where I got old enough to realise that everybody’s a little messed up.

Did he see the film?

Yeah, he was there in Edinburgh. He was a much cooler, funnier and nicer guy that the character in the film. He loved it. There’s two things he didn’t like though: the use of the song Bits and Pieces — he begged me to use a cooler song — and he didn’t like when Cameron Jack was improvising talking down to the wee boy. He would never talk down to me. But otherwise he loved it.

He also actually hated football. He told me never to back a side with the Celtic/Rangers thing, so I saw it as this thing which causes a horrible divide and violence and trouble, and that influences the fight scene in the film.

Did you want the film to also be a comment on how this sectarianism can be such a negative force in these neighbourhoods?

I’m really interested in things that we don’t really choose that are passed down to us. Parents give you your football team and your religion. I remember one night there was this father and son walking past, and the son was really young and the dad was really drunk and singing a very sectarian, Celtic song to the tune of Que Sera. It was in the script at one point, but because it was a parody of Que Sera, we would have had to get the rights to it.

How much did you want it to be as authentically Glaswegian as possible?

That’s always my thing. I never like to compromise with that. I know it gets treated like a foreign language film but that’s my whole thing. I like keeping it as Glaswegian as I can. I remember being young and seeing Glasgow-set films and it was always a real buzz when they were authentic.

I like keeping it as Glaswegian as I can.

I had to look up what “Fenian” means, even though as a Catholic I technically am one. But I could pick up “Orangeman” and figure out there’s the conflict there. But perhaps for wider audiences there might be some references lost on people…

As long as people get the gist, I’ll be happy. I know there’ll be some stuff that goes over people’s heads. There’s one line that people always miss, when the Dad is in the chip shop and says: “Have you got a sister for the wee man? He’s a VL.” It’s a very Glasgow saying. It stands for Virgin Lips. But a lot of people, even in Glasgow, didn’t get that. So it might be very colloquial to Springburn, I’m not sure. 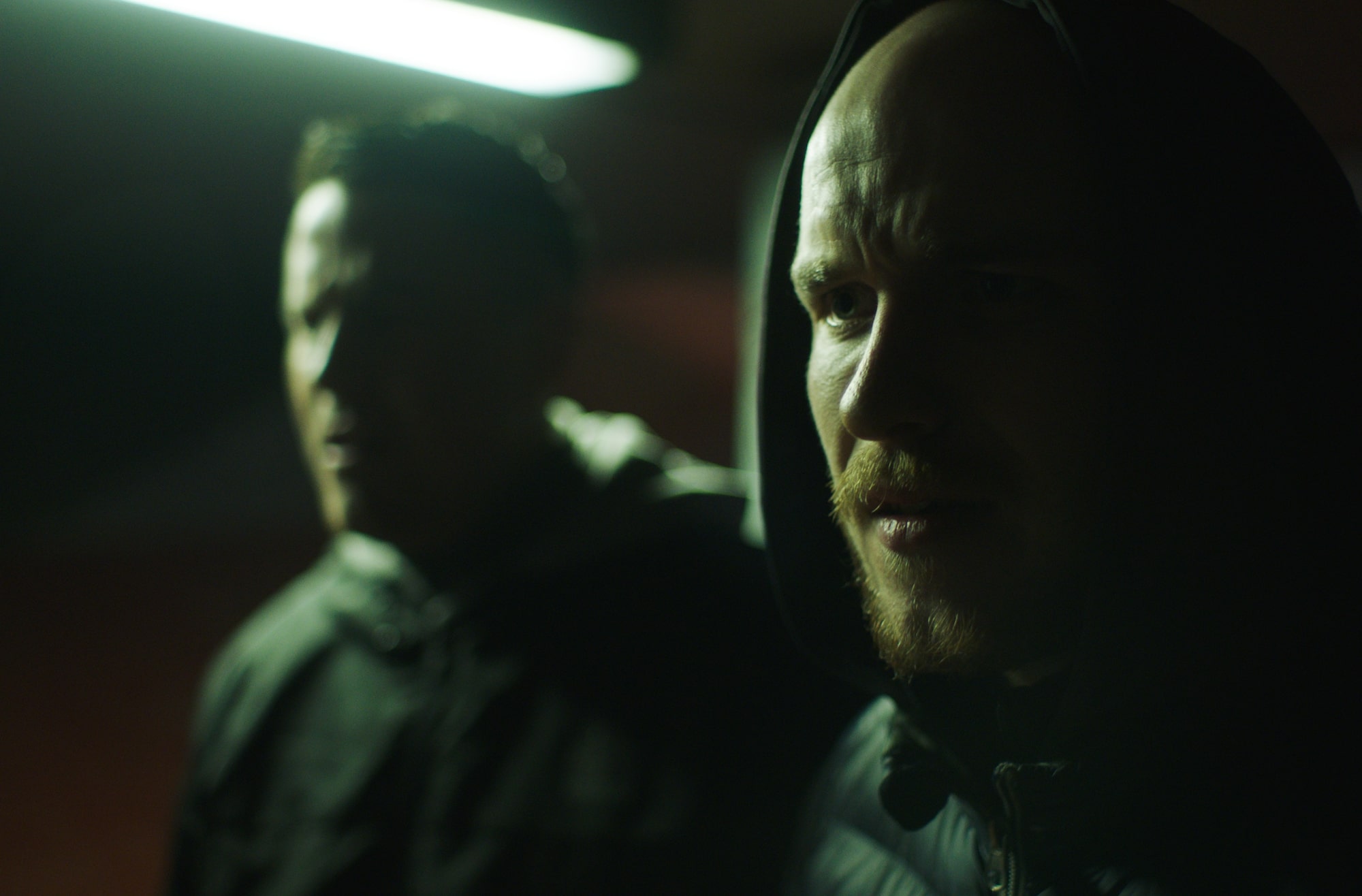 The dad has a great energy to his appearance and language. At times he’s even very funny. How important was it to make this story very funny while having that undercurrent of melancholy?

If I was to do it again, I’d probably make it funnier. The night it was based on sounds like this horrible, traumatic night, but it was really fun in my eyes. My dad was such a funny force of nature. I actually considered cutting out the scene at the end where the boy snaps at the dad for a good while. I know it works, probably helps give it that bit of closure, but I was really scared that I was making something too melodramatic. So it was really important to me that it was this funny night on the town.

How did casting Cameron Jack and Kyle Gordon work? I imagine it was quite different for both of them…

One of the guys that played the Rangers fans in the tunnel is a drama teacher in a working class area in Glasgow. We got access to his drama class and all his kids were amazing. But Kyle just had this natural leadership. We were workshopping the scenes with all the kids. A lot of them were playing it like “oh you’re a bad dad” but Kyle was playing it like “come on, turn it up man, you’re my Dad man” and there was a lot of love to the way he played it. That was really important to me. As soon as I saw that he had the part right away.

As for Cameron Jack… my dad was always like a formidable, loveable presence. He’s a big guy but there was a gentleness to him. We met Cameron in the pub and as soon as I looked at him I knew he was the right guy for it. He spent like twenty minutes before talking to us just petting my dog. So I was like, yeah he’s got this vibe my dad’s got, just this nice vibe. 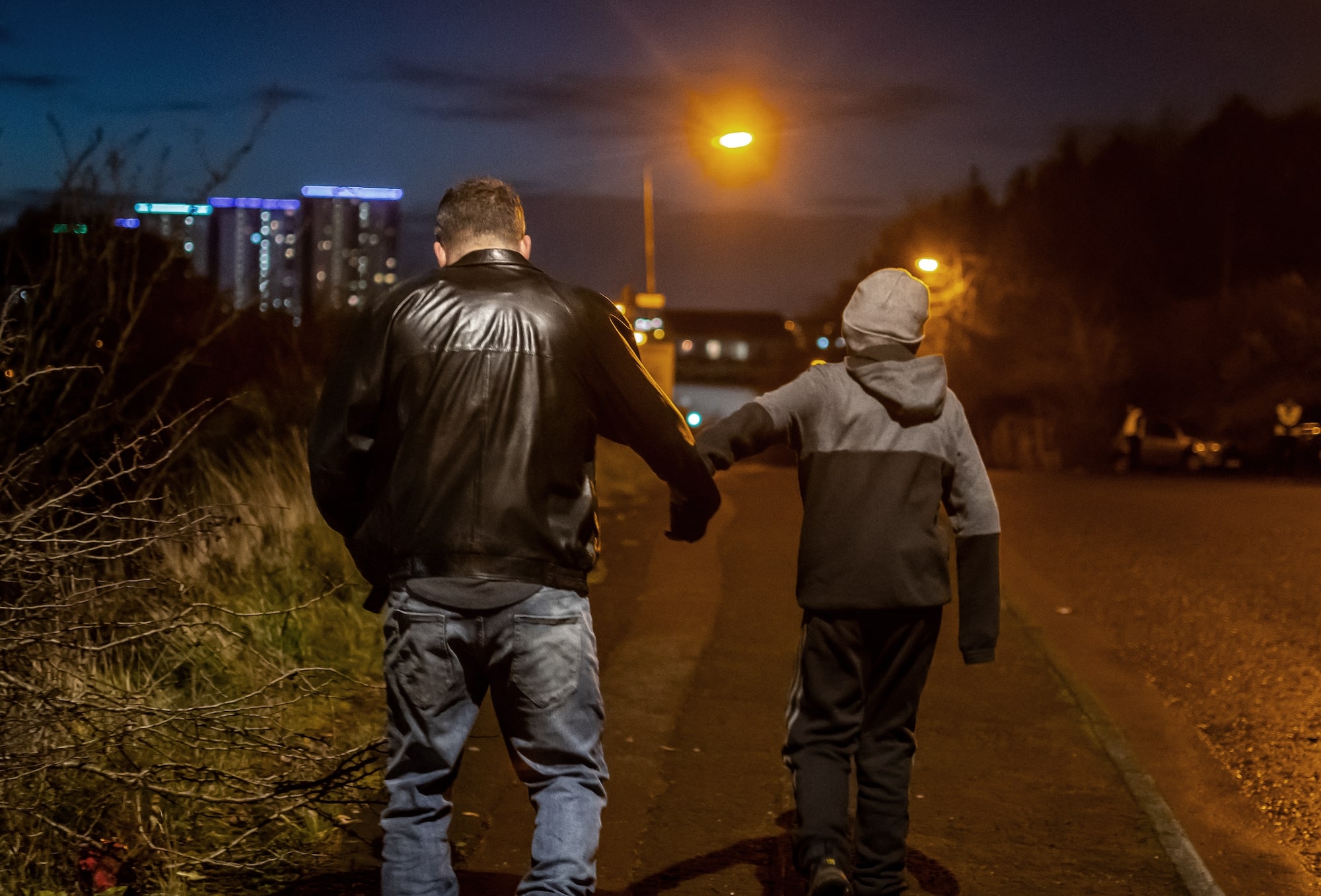 I loved the relationship between the two of them, which avoids this melodramatic element. Instead there’s this mixture of embarrassment and love that Kyle Gordon embodies really well. How did you want this to work in the film?

I think Kyle just got it instantly. My dad had this thing where he could go up to anyone and just start talking to them. I would just clam up around him and become a nervous wreck because he was just so charismatic. Every girlfriend I ever had was just in love with my dad as he had such a force of nature. It was hard to be fully myself around him when he was switched on because he was just too quick. The Kyle kid really just embodied it. He really just got it. He’s the real deal. I can’t wait to work with him again. I just think he’s going to get better when he gets older.

It was really important to me that it was this funny night on the town.

As you mentioned the film’s soundtracked is bookended by the song Bits and Pieces despite your dad’s reservations. Why were you set on that 90s cut?

My editor and I were in the edit just trying to find a song. Then he joked: “Why don’t we put Bits and Pieces in there?” Then I was like: “Why ‘don’t’ we put Bits and Pieces in there?” Immediately he was panicking saying: “We can’t do that.” But as soon as we put it in it worked really well. I knew it would get a reaction, especially with a Glasgow audience. I just love films that end with a ironically happy song, and I just knew it work work. It’s actually a beloved song in Glasgow. People voted for it to be the national anthem.