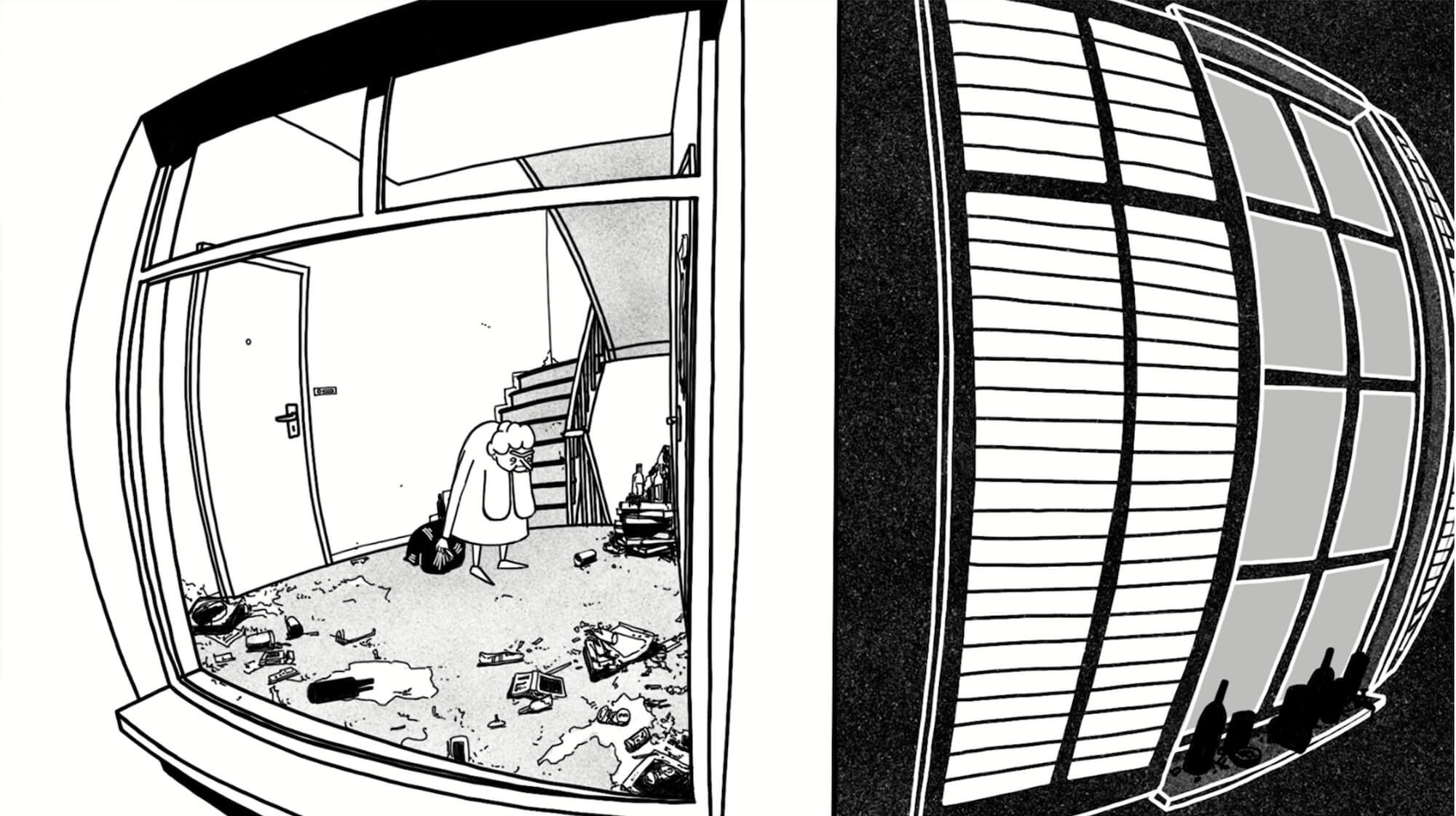 Last year DN was fortunate enough to catch Studio PIAF filmmakers Amélie Cochet and Louis Möhrle’s striking animation IHR (THEM)at the Encounters Film Festival. Back then we said “it’s exactly the kind of work you hope to catch at a festival as innovative as Encounters; weird, wonderful and full of comedy and heart”. So, it’s an absolute pleasure to say that we’re here today to present the film’s online premiere. IHR is a visually bold animation about an apartment building that slowly accumulates a humongous pile of trash in its courtyard. The ensemble story is anchored through the eyes of one of the building’s elderly residents as she witnesses this pile-up unfurl until one day disaster occurs. Created for their graduation project at Lucerne School of Art and Design, Cochet and Möhrle join us below where we discuss the environmental themes of the film, its minimalistic yet dramatic colour palette, and the perks of creating animation as co-directors.

Where did the idea for a film centred around a foreboding trash heap come from?

The initial idea was to make a film about a current topic. Since we both lived in shared flats at the time we were confronted with responsibility, or the lack of it, on a regular basis. For example, when the sink is full of dirty dishes but instead of doing them you just put yours on top and think “the others didn’t do them either”. Then there’s also a theory about trash that says that trash accumulates automatically, meaning that when I throw trash somewhere it’ll be more likely that the next person passing will also throw some trash there and so on. When it’s a place that is tagged the probability of accumulating trash in this spot increases. So, there was our topic: trash. One can say that as Swiss people we don’t really know what it means to have trash in the streets but we wanted to focus on the theme of passing the blame on to others and getting rid of the guilt. That’s why the title of the film is IHR, which is German for ‘Them’ as in it is their blame, not mine.

Then we came up with this building with the inner courtyard and as Amélie was writing a thesis about ensemble films we decided to make five main characters to create this metaphor for a society/a city/the world. The old lady of course is sort of a Leitmotif, connecting all the other inhabitants of the building, she’s also the only one not contributing to the problem, as she disposes her trash correctly.

We wanted to focus on the theme of passing the blame on to others and getting rid of the guilt.

At the same time we wanted to keep the focus on the courtyard, notice that the whole film plays in the courtyard, and we used this sort of voyeuristic gaze through the windows into the different apartments and the staircase to evoke a sense of observation or of being observed. 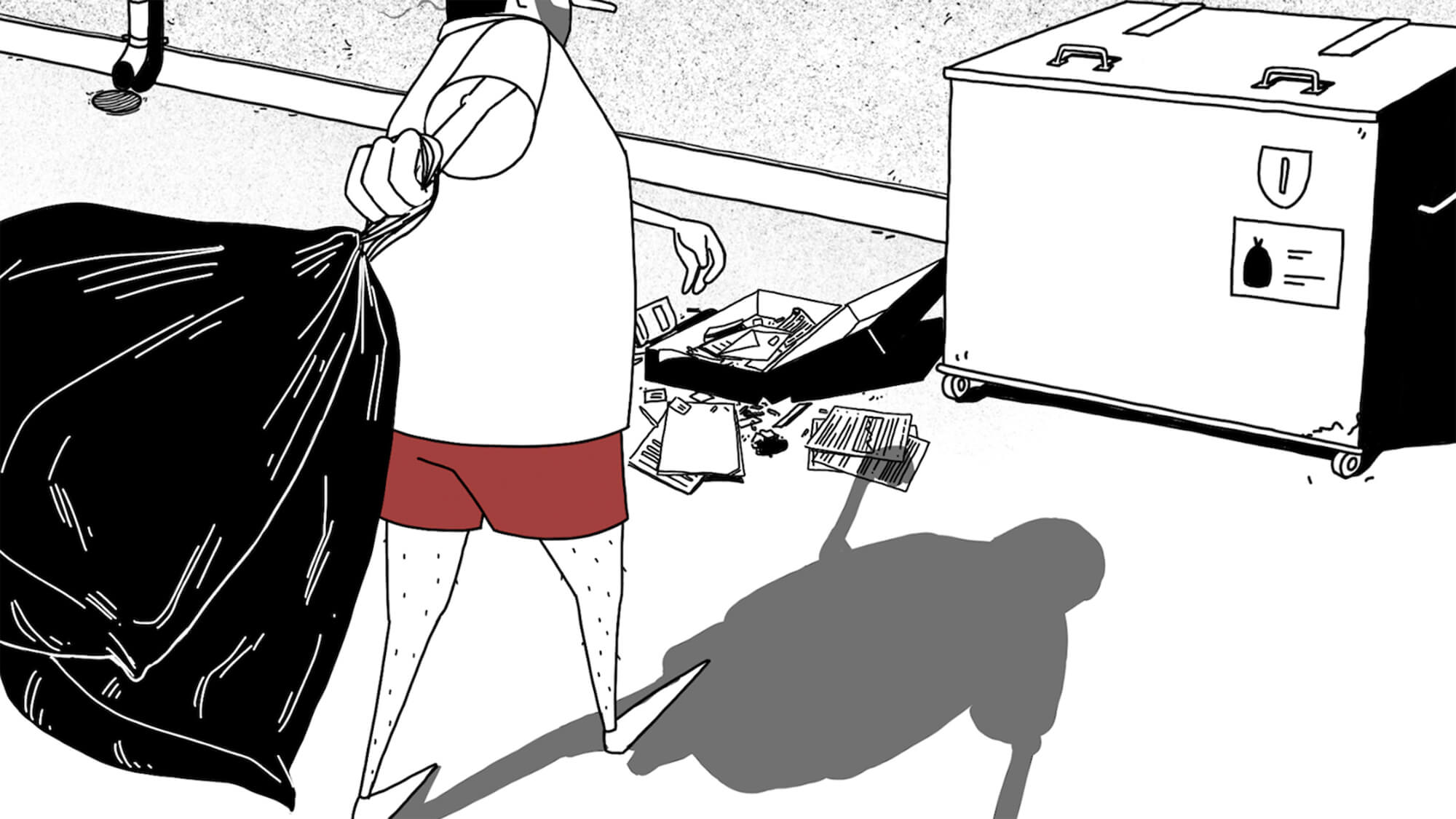 It’s such a visually compelling film with its colouring and style too, what drew you to utilise minimal yet dynamic imagery?

Since, at the time, we both weren’t big fans of colours we chose to make a black and white movie but still wanted to have one colour to be able to have accents and focus points. We chose a dark red because of the dramatic effect it gives in combination with black and white.

We were heavily influenced by different comic book authors and illustrators such as Winsor McCay, Brüno, Frank Miller, and Manu Larcenet but also by fellow animation directors for example Jack O’Shea and Sylvain Chomet. We absolutely wanted to have some strange angles and perspectives to play around with and also typical comic elements like split screens, frames, outlines.

What challenges were you faced with when it came to compiling everything and beginning the project practically?

First of all we held up pretty good time management. We worked long days but never had to pull all-nighters, which are counterproductive anyway! When we had the outline of the story we started to make lots and lots of thumbnails; little sketches of possible scenes, possible encounters, possible characters. And we started to sort these out and to arrange them into a timeline, writing a script alongside. At the same time we had long discussions with our mentors about which characters we should have, how to develop them and tell their different stories. The fact that we wanted to have five main characters and had only six minutes of film was the reason why our characters turned out so generic. We wanted to make them recognisable for the audience at first glance, so we don’t lose time by introducing each of them.

Then came the storyboard and animatic, which we discussed and rearranged with a lot of different people, professors, mentors, friends, family and fellow directors.

How did you divvy up the various tasks of production?

Whilst Louis was drawing the first backgrounds, Amélie started designing the characters and making the first animation tests. During the animation process we had a lot of help from fellow students and alumni. There were also theater actors coming to help us record some reference shots for the more complicated scenes. Fellow animation student Aline Schoch and our sound design Professor Thomas Gassmann were doing magic by recording and mixing sound effects for us. Dieter Hebben, a German foley artist recorded original foley for us which was the icing on the cake, and as far as the music is concerned we could count on Carmen Nuñez, a film music composition student at the Zürcher Hochschule der Künste. We told her we wanted some dirty Balkanesque jazz for the scene where the party escalates, she then did the rest and composed six minutes of the finest music that fits perfectly with the plot and complements the film in a seamless way.

We absolutely wanted to have some strange angles and perspectives to play around with and also typical comic elements like split screens, frames, outlines.

IHR was our graduation film at Hochschule Luzern Design & Kunst on BA Animation and we had pretty much the whole last Bachelor year to make our film, with the exception of a four week experimental animation course at the beginning of the year. So there were nine intense and fantastic months from pitching the idea, we developed the rough idea during the summer break before the last year, to the finished film.

What are the benefits of working as co-directors when making an animation?

The fact that we can bounce ideas back and forth quite easily and get new ideas right out of it was really cool and also compensating for each other’s strengths and weaknesses and dividing the work accordingly is a benefit we think.

What equipment and software did you use to realise IHR?

First we used pencils and lots of scraps of paper for the thumbnails and development sketches. Then we worked on big Wacom Cintiqs and used Adobe Photoshop for the backgrounds and design elements, TvPaint Animation Pro for the animation, Adobe After Effects and Premiere Pro for the compositing, ProTools and a lot of different microphones for the sound design and our phone cameras for reference videos. Then of course a lot of snacks, even more coffee and wine for the late evening sessions…

And finally, what’s next for Studio PIAF?

At the moment we’re doing some commissioned work such as illustrations, booklets for musicians and explanatory animations and developing some personal projects alongside. We’d like to make short films again, but we haven’t taken the time to develop any concrete ideas yet, since we’ve been quite busy going freelance. Handling a business and both doing part-time jobs beside too but maybe next year will be a good year for a new film?

Directors Notes is honoured to present the premiere of IHR on our pages today. If you would like to join the filmmakers sporting a fetching DN Premiere Laurel, submit your film now.