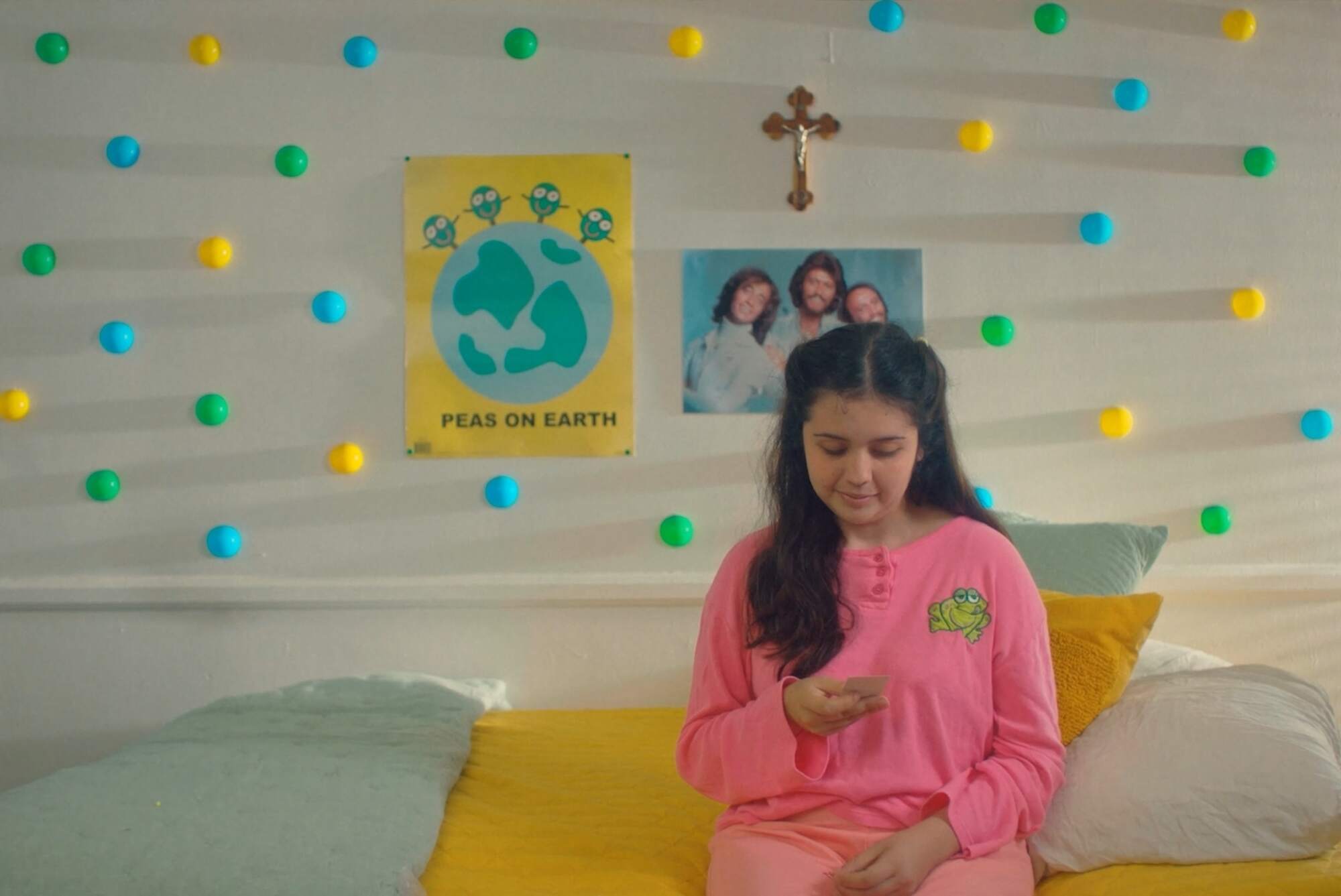 DN first caught Kate McCarthy’s debut film Look, Mira as a part of this year’s National Film Festival for Talented Youth where it stood out to us amongst a sea of fascinating, intriguing films with its unique blend of heightened comedic drama and plaintive characterisation. The story follows Mira, a teenager facing the biggest challenge of her life in the form of an audition to be a church cantor at her Christian high school. In the run-up to the audition Mira encounters a plethora of characters including family, friends and even local hot boy Hunter Chase, who are each realised in McCarthy’s thrillingly unpredictable tone. With Look, Mira recently arriving online DN invited McCarthy to join us for a conversation to talk over the tonal evolution of her screenplay, her reexamination of on-screen comedy, and the practical challenges she faced in realising her first fully-fledged film as a director.

How much of yourself is there in the character of Mira?

People have asked if this story is based on my own life, it’s not, but it definitely contains my feelings and fears. The only literally true thing is that I did audition to be a cantor, at my French Catholic middle school, and I did leave abruptly in the middle. Due to lack of interest, however, not nerves… that’s where I end and Mira begins!

What was the story of Look, Mira born from instead?

In Oct 2020 I was working on my first pilot and thought about using this cantor audition story as backstory for one of the main characters, a brash, confident Colombian-American girl named Mari, as a nod to my childhood best friend Mariana. I added the connective tissue of the mom, the grandmother’s photo, the boy, and the ultimate triumph. It felt like such a tidy little narrative that I thought maybe instead of burying it in a TV show that would never happen, I should make it into a short film. A year since the initial idea, we completed the film in Oct 2021, and I’m thrilled to share it now.

You’re still at an early stage in your filmmaking career, what informs your creative process and how did you find the practicalities of moving from idea to production?

I’d never made a short, just comedy video sketches in college. I’d been doing comedy, mostly vaguely alternative stand up and character stuff, since freshman year. Then during the pandemic, now 23-years-old, I had the opportunity to re-examine my relationship with comedy, instead of white-knuckling my way through front-facing videos and other internet content. It’s all we had at the time and many of my peers were killing it but that just didn’t feel like me. The pandemic allowed me to disrupt the status quo of my aspirations.

I was having this first love experience of imagining a world and lining up all the details to realize it.

One day I was going back through my joke notebooks and realized that I had a lot of ideas that were best shown not told. They were pretty darkly funny, brutal vignettes that felt like snapshots from one very sad life. So I added them to my new short narrative, changed fiery Mari to fragile Mira, and it all came together. I truly had a sudden new purpose, I was like, “Oh, maybe… I should do film!”

I finally got around to the script in Jan 2021. My good friend Kalid came on to co-produce. What we lacked in funds we made up for with time, we quietly plugged away at our Google Drive production folder from Feb until the shoot in early June. Kalid handled everything I knew nothing about, like insurance and deal memos. He called in every favour to put together our crew. He thought through every worst case scenario and kept us on schedule. He treated this small production like it was legit, and so it was! I was having this first love experience of imagining a world and lining up all the details to realize it, so Kalid let me handle all the creative departments. I wanted a small life told big, grand, glamorous, colourful, but so bleak. So the film grew into a dreamy, out of time, almost heightened reality. 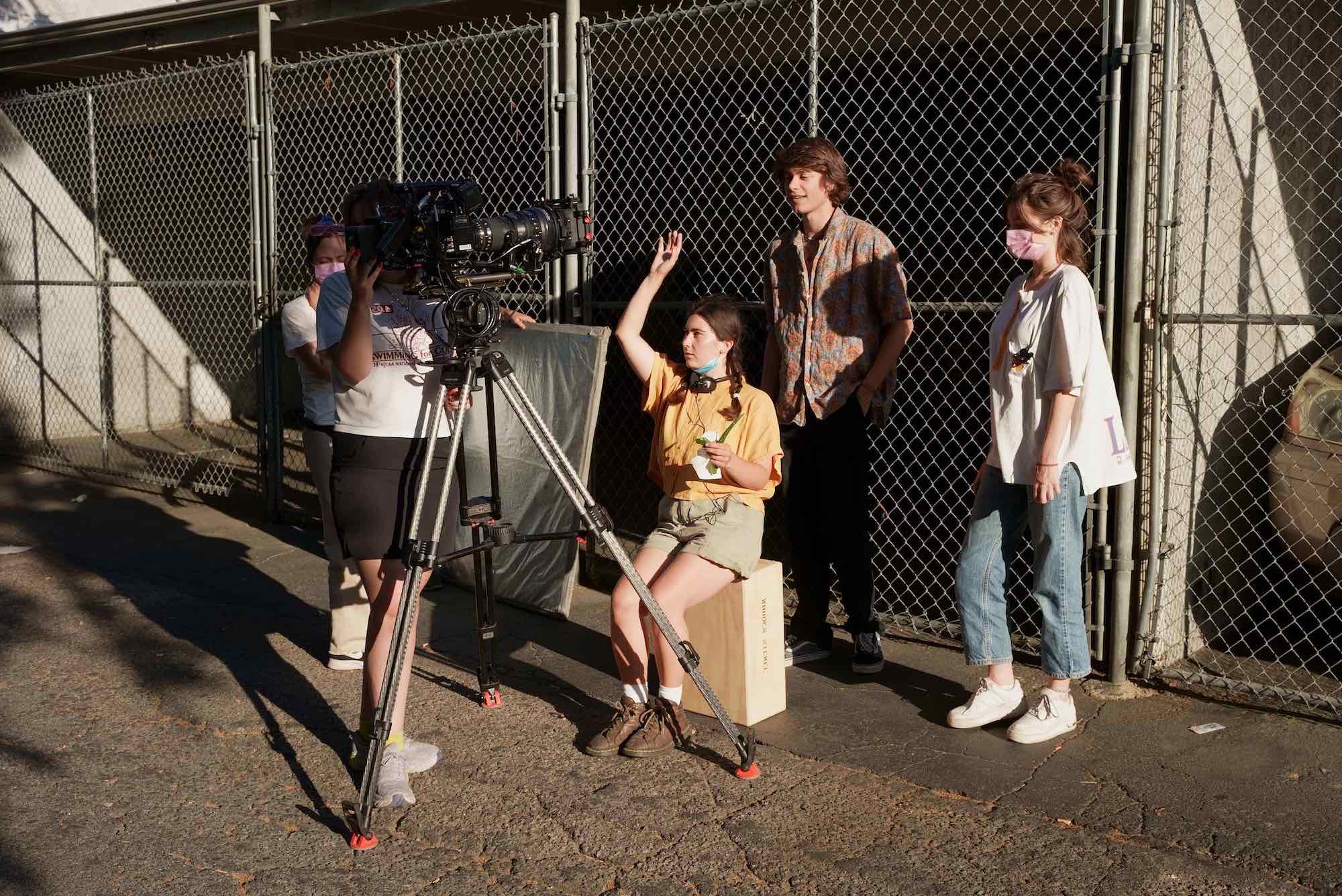 I think that energy definitely comes through in the film. It has this all-or-nothing sensibility.

The story is antithetical to a successful short film, it’s not proof of concept, it’s a full start-to-finish story. It’s a little convenient and facile to do that in eleven minutes, so I wanted to lean in and make the childlike simplicity intentional. I made choices based on visuals and commitment to this world over realism, instead of navy or grey uniforms polos, how about yellow? Instead of a nondescript modern-day high school exterior, how about a defunct pink LADWP building from the 40s, that we definitely did not have permission to shoot in front of?

I cold emailed Bethany Michalski who became our DP, and she picked the Arri Alexa Mini with Cooke 18-100mm and TLS Canon FD lenses to accomplish the older Hollywood zooms and filmic quality we wanted.

I wanted a small life told big, grand, glamorous, colourful, but so bleak. So the film grew into a dreamy, out of time, almost heightened reality.

The performances of Mira and the wider cast are such a joy to watch. Were you familiar with them before the shoot or did you go through a full casting process?

Our lead actress Mariana Carvajal, who is Colombian-American like the Mariana this character originally stemmed from, popped up on Backstage, her fresh-faced headshot appeared from on high… To be honest, a lot of the other cast were not the originally slated actors, but now I wouldn’t want it any other way! I learned to let so much change for the better.

Tonally, there’s a real jump between the lonely alienation felt by Mira and the heightened interactions she has with everyone, how challenging was that to balance?

I always knew this was a story about youthful alienation. But soon I wanted it to grow real teeth, to have discomfort and dread juxtaposed with a light story that culminates in a musical montage. I wanted darkness behind the colour. My brilliant friend Steven Kreager, who was 1st AD and an executive producer, distilled it in one shot: Hunter Chase has bumped into Mira in a school stairwell. He leers from the shadows, wearing a pearl necklace. Steven likened the pearl necklace to the colourful feathers a predatory bird flaunts to lure prey. The bright, friendly exterior belies the real darkness and threat underneath. And there was the bite I wanted for this coming-of-age film, the all-at-once sweet and menacing experience of girlhood and beyond.

The story is antithetical to a successful short film, it’s not proof of concept, it’s a full start-to-finish story.

What has making Look, Mira taught you about producing films that you’ll carry into your next short?

This first outing has taught me about stamina. No one will care about your project like you will, from start to finish. This really hit me in post, or even the day after we wrapped, because then it was just me and these drives of footage, and if I didn’t stay on it, that stuff would still be sitting in my closet. It was on me most of all at that point to keep up the momentum and jump into the edit but then there was sound! And color! I totally forgot that it doesn’t just end on the adrenaline and climax of shooting. I had to find not just the energy but the excitement to keep hacking away at the VISION, you know. So next time I want to be better equipped and ready to sustain for the duration of the process.

Which leads to my final question… what can we expect from you next time?

I’m supposed to go to AFI in the fall for directing. But if someone wants to employ and/or represent me… let me know!