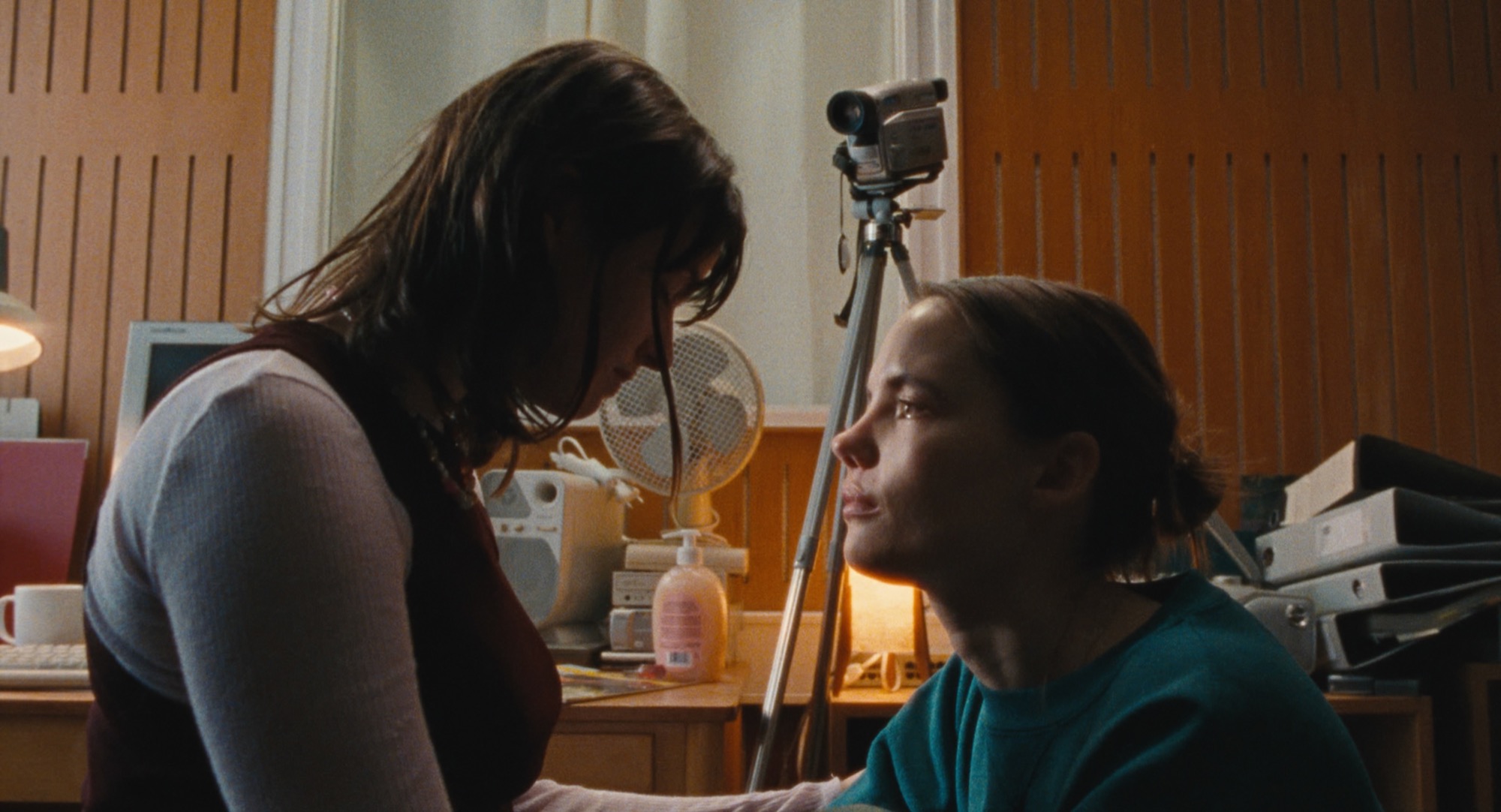 We all hide behind certain facades even from those nearest to us and when Swedish Director Leonard Rääf decided to use that fact as a springboard for his new short Hiding Behind Masks, it led him to a complicated yet tender reflection of friendship and nostalgia. Rääf’s original writing drawn from his personal experiences (with an added unexpected twist) is anchored by naturalistic performances from actors Rosemarie Mosbæk and Marie Boda, creating a highly enjoyable coming-of-age drama about the discovery of well-kept secrets and the bonds of friendship. We invited Rääf to speak to us here at DN about crafting a narrative from conversations he has long had in his head, the focus and engagement he finds when shooting on film as opposed to digital and the challenge of constructing the look of the film’s school location.

The central themes in Hiding Behind Masks have a complicated relatability to them, where did you draw your inspiration from?

When conceptualizing any story, I often start with some kind of personal experience. It could be drawing from an exact scenario, almost recreating it, or simply something small – like a location, a person, or a detail of an incident. I tend to start that way, only to steer the story in a completely different direction, yet keeping the main themes. With this film it was kind of both. I knew I wanted to steal some simple scenarios from my own life, like hiding in a school gymnastics hall, but I also wanted it to have a twist. And most importantly, I wanted to deal with a bigger idea, being this theme of hiding behind different facades.

It was a rather fast process as a lot of these conversations had lived in my head for a long while.

It’s just such a human and versatile topic, and I believe it came to me through memories of conversations I have had, where I’ve grown closer to someone, as they showed their true self or vice versa. So after putting these different elements into the first film idea, I just started writing the script. It was a rather fast process, as a lot of these conversations had lived in my head for a long while. But as I mentioned, I also like to put a twist on it – and so I did in this story too. 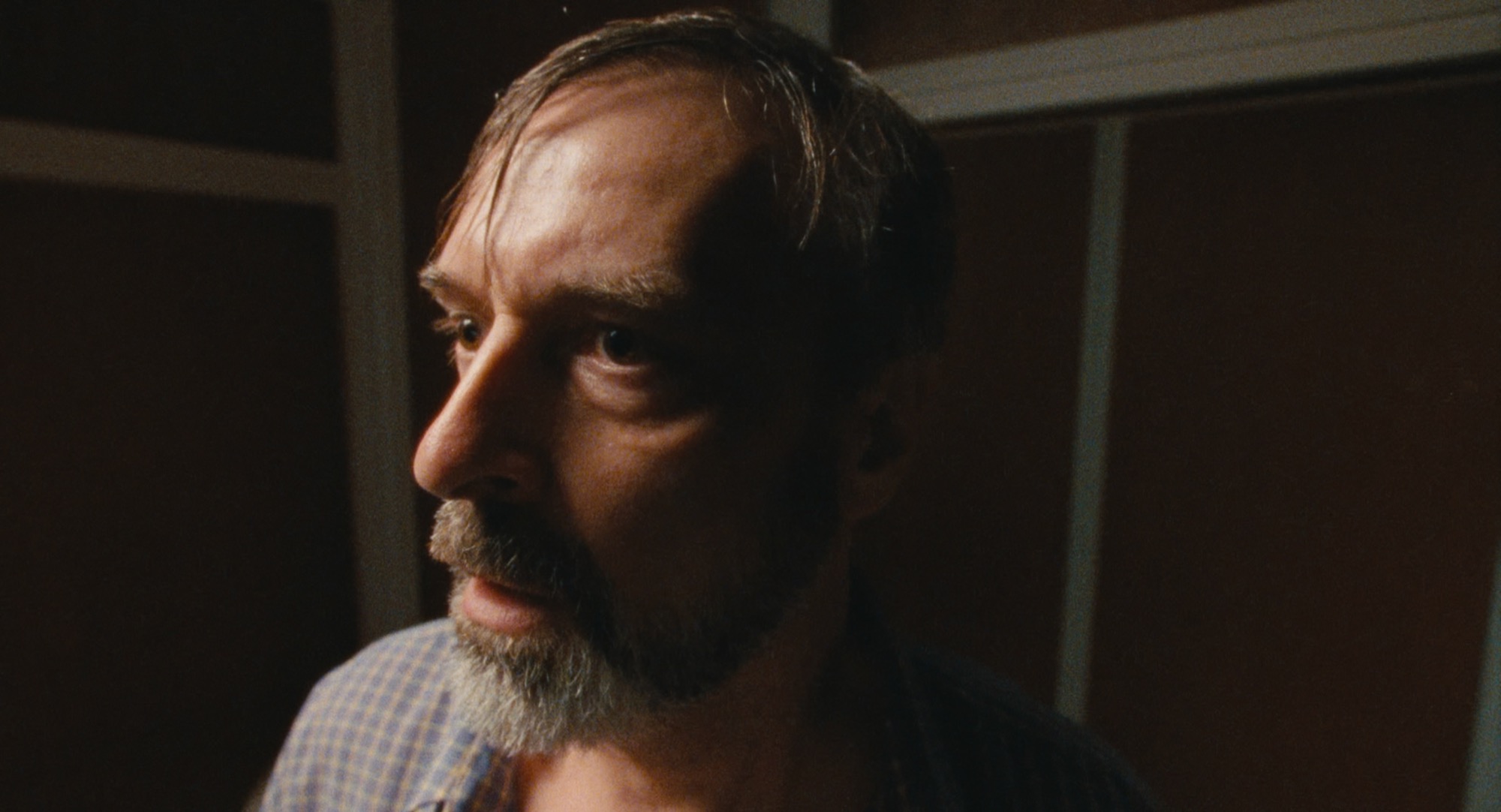 How do you approach your script writing once the idea is formed in your head?

I usually pitch the story to people around me that I trust and if I feel like they’re responding in the way I intend the film to be perceived I start attacking the page right away. I don’t have a concrete process or any good tricks with post-it notes or formulas. I just start writing and stop when it feels there. For me, it’s a lot about collecting conversations from life and finding the right moment to utilize them.

How quickly did you move into production and what was your set up for the shoot?

When the first draft was finished, we quickly got to pre-production. I’m lucky to have wonderful producers around me, who trust my ideas and so they were on board right away. Everything went very fast from there, and within a month of so, we were shooting. We shot for four days in different locations around Denmark. I try shooting on film as often as I can, and so we did for this project too. The producers were fine with that from the beginning, so luckily there was no fighting over that. The DP Zack Spiger and I, simply decided what format and stock to use which in the early stages was actually leaning towards Ektachrome. However, we ultimately went with 200T and 500T on an ARRI Arriflex 416 Plus camera for better low light capabilities, as I tend to want to go quite dark and minimal with the lighting. We developed and scanned it all at Focus Film Stockholm with the wonderful Nina Boriri.

You mentioned this story springing your own times of hiding in the gym hall, how did you find the perfect school location to best meld with your memories?

I think it was a mix of personal experience and imagination. School gym halls are just very nostalgic for me. I used to hide out in our school gym as a dumb kid too. So that setting is just relatable to me. They also offer an interesting space for conversations that feel rather freeing and of course, they tend to look cool. And at least in the past, we had many of those retro-looking gymnastic halls and schools here in Scandinavia but it also turned out that there aren’t a whole lot of them left. So my core memory was kind of challenged and we actually had to combine three different locations to achieve the look of the school I was going for. So, after a lot of location scouting and changing the floor in the gym to that lovely green color we had something quite beautiful.

We opted for total silence, which would let the actors ‘talk’ simply through expressions.

Hiding Behind Masks is driven by two incredibly strong performances from Rosemarie Mosbæk and Marie Boda, was everything tightly scripted or did you incorporate improvisation?

They’re just incredible. They both have an extraordinary ability to convey emotion through subtle expressions, which is what I tend to look for as a director. However, there’s not a whole lot of improvisation in my films. I do work with the actors early in the process though, and occasionally change the script after our sessions. In the case of Hiding Behind Masks, we actually found out that the initial dialogue I had written for the confrontational scene with the janitor was redundant. We opted for total silence, which would let the actors ‘talk’ simply through expressions. I thought that worked out nicely, and for me personally, increased the intensity.

There was this one moment of improvisation in the film, in the scene where the girls lay on the carpet. We kept the camera rolling as they were making jokes and having a blast when suddenly the sex toy literally got stuck on her forehead for real. That really set them off laughing and that take made it into the final cut.

Apart from its aesthetic qualities why do you prefer to shoot on film?

Beyond achieving a look that I prefer over digital, I also feel that the workflow and the inherent nature of shooting on film creates a certain focus and engagement that inevitably excels the work you’ve gathered a team around. You’re simply a bit more calculated at all times because you know the stakes of pressing record.

The film’s cinematography is beautifully raw, what influences do you draw from?

Well first off, thank you. I believe the fact that I began using a camera to tell stories at a very early age has had a great effect on me. I got my hands on a stills camera as a kid and would shoot anything and everything. Back then of course I had no access to actors and crew, which made my stories all about the visuals. I feel like that interest in telling a story using perspective is something I’ve held onto and now as a director, I’m very specific with my framing. Then there are of course those movies that change you and inspire you to elevate your visual language, and Paul Thomas Anderson has always been a huge part of that process for me. His films really changed a lot for me.

You’re simply a bit more calculated at all times because you know the stakes of pressing record.

What guided your choice of music cues for Hiding Behind Masks?

With this film, I wanted to just allow myself to use music that simply works. To not rule out the music as cheesy or too much – which I have a tendency to do if it doesn’t feel subtle enough. But with this one, I wanted the warmth and depth of their friendship to be heard. The songs I chose as temp had that effect on me, so we ultimately decided to license them for the final film.

Do you have any new projects in the world that we can look forward to?

I’m currently working on my debut feature, which I hope to be shooting this year. It’s a comedic coming-of-age drama, taking place in France and Italy. It’s not directly connected to the story of this short, but this film has definitely helped the process of getting a feature project up and running.