Dominica Harrison’s short animation Chado is both a magical journey into an enchanted Russian forest and an exploration of first experiencing emotional turmoil at a young age. Harrison embraces a practical hands-on approach to her animation, preferring the physicality of the form over a purely computer generated model, allowing the tactility and her personality to shine through every frame of the film. It boasts a beautiful, heartbreaking story too which concerns a young child spending a long hot summer at a grandparents before being confronted by her returning mother who brings unsettling news. Harrison’s enchanting illustrative imagery allows the narrative to flourish, creating an animation that feels both adult and childlike at the same time. DN is delighted to premiere Chado on our pages today and have Harrison join us in conversation to learn more about her physical approach to animation and the challenges she found in creating personal work.

You mentioned that the film was inspired by your memories of spending summers with your Grandma, how did you structure those memories into the story of Chado?

Yes, when I was a kid I spent most of my summers at the country house (‘dacha’) that belonged to my grandparents. The location where the events of the film are happening is modelled on my grandparents’ house. The real house was also neighbouring the forest and I remember playing there unsupervised for long hours when my grandparents were busy playing cards with their friends or taking their afternoon nap.

I wanted to represent the slow quality of a summer holiday when you are a kid, something that seems quite impossible to replicate now. In the first drafts of the script I actually had a Grandad character present in the film as well, however he disappeared in the later stages. One of the scenes in the film that has been cut featured Grandad and Chado going for a walk towards rural rail tracks hidden in the midsts of the forest, something we used to do with my granddad very often. We used to sit on the little hillside and count the wagons of the passing train, and when I got a little older I used to come back to the same spot with my friends and leave coins on the tracks to get flattened out by the weight of the train. Having a real location to refer to helped me when working out the details of the film. The story itself is not autobiographical, however the small details in the interiors and the landscape are.

What interested you in making a film that explores a child facing difficult emotional situations?

At the time I was interested in child psychology and in particular the change of perception that kids undergo between the age of four to six years old. I myself have very little cohesive memory of my own childhood at that age but I always thought that that age gap was one of the most influential and interesting development stages that a person’s psyche undergoes. In particular, I was researching the notion of ‘magical thinking’ that is present in kids that age. They often have an unrealistic evaluation of their own ability to influence the world and they often make far-fetched connections between their own actions and events that are happening around them. Things such as, “I have stepped inside all of the squares of the sidewalk on the way home – this means the grumpy nanny will be gone forever”.

Having a real location to refer to helped me when working out the details of the film, the story itself is not autobiographical, however the small details in the interiors and the landscape are.

I explore this notion in the film, demonstrating Chado’s conviction that the death of the dog is linked with the appearance of the Stranger in the house that is supported by the development of jealousy towards the Stranger. The complicated feelings that the character is experiencing result in a ‘childish’ decision to punish the Stranger by bringing her a tick.

You mentioned there that it’s also a film about coming to terms with death. Did you draw inspiration from any other films or art that tackle this subject from a child’s perspective?

The perception of death by children has also been a subject of my research. It is also linked with the idea of ‘magical thinking’, in the film Child wants to punish the Stranger by killing her, but to Chado that means that she just won’t be around anymore in the same way as the Dog was no more. One particular film that was a big inspiration around this theme was the Russian feature Wolfie (Volchok) by director Vasiliy Sigarev that talks about a complicated mother-daughter relationship. I have also looked at the director Andrei Tarkovsky for the tone and mood inspiration.

How long did Chado take to create from the initial idea to the final edit?

The rough concept of making a film inspired by that particular time from my life has been in my head for a while before the opportunity to realise it. It took around two years from the moment I first got selected by the BFI NETWORK team to the moment of the full completion.

My practice originates from drawing so the interaction with physical materials is quite important for my process.

How would you describe your style of animation?

I am interested in pushing the boundaries of style and exploring the idea of ‘expanded animation’ in my work. My favourite way of working is materials based and hands on, my practice originates from drawing so the interaction with physical materials is quite important for my process. I first discovered printmaking in university and fell in love with that medium almost as much as I did with animation when I first saw the things that I had drawn move for the first time. Combining the physicality of printing with the benefits of digital 2D techniques gives me flexibility and room for experimentation. I like to think of animation as a medium lying somewhere between cinema and fine art, and qualified for viewing both in a gallery space and a cinema.

What drew you to incorporate risograph printmaking?

I have been developing the ‘printed animation’ technique throughout several of my recent short films. My graduation film Illusions was entirely screen printed (resulting in more than 400 hand-pulled screen prints). It has been a hugely rewarding experience to be able to work this way and it wouldn’t be possible without me being a student with full-time access to printing studios at the Edinburg College of Art where I have been enrolled. I wanted to incorporate the hand-made print technique again however it was too lengthy and expensive to employ screen print for Chado, and the next best option available was risography since it incorporated a very similar approach when dealing with an image and mechanises some of the printing process. It’s also a much more cost and time effective method than screen printing the sequences by hand.

Combining the physicality of printing with the benefits of digital 2D techniques gives me flexibility and room for experimentation.

But as with any handmade method, especially printmaking, you have to give up some degree of control over the final image, there will always be misalignments, misprints, textural errors and other small but wonderful imperfections that are precious for me as they make the work completely unique. I try to incorporate these ‘accidents’ into my process and let them serve me as visual devices. For example, in the dream sequence, where Chado is being overwhelmed by the insects in the forests and the images become disjointed and intense, that visual solution to represent the emotional state of the character through misalignment of colour layers came to me through the process of making a mistake when working with a risograph press. 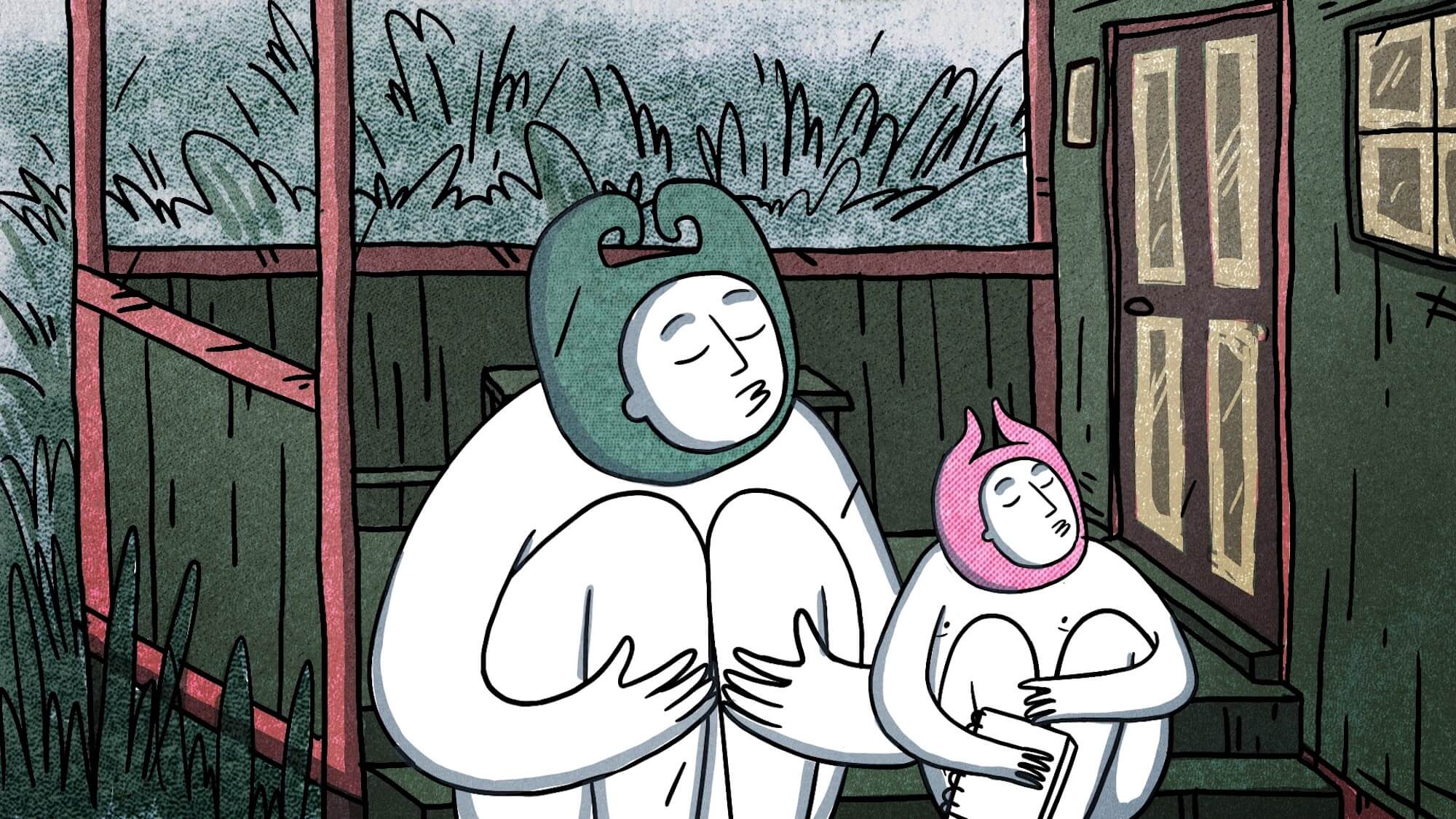 What are the challenges of creating work that’s personal?

I think the process of making work that is highly personal forces you to really look into your own memories and scrutinise the feelings that they bring up, it could be a helpful tool to sort out what is happening in your head but I think it could also be quite overwhelming.

Are you working on any new animation projects at present?

I have been working with filmmaker Meghan Howarth on an animated documentary about a holocaust survivor called Eva Scholtz for the past year and we are about to go into the production stage with that project. I am also in the process of writing a new short film and working on several shorter image-based projects.