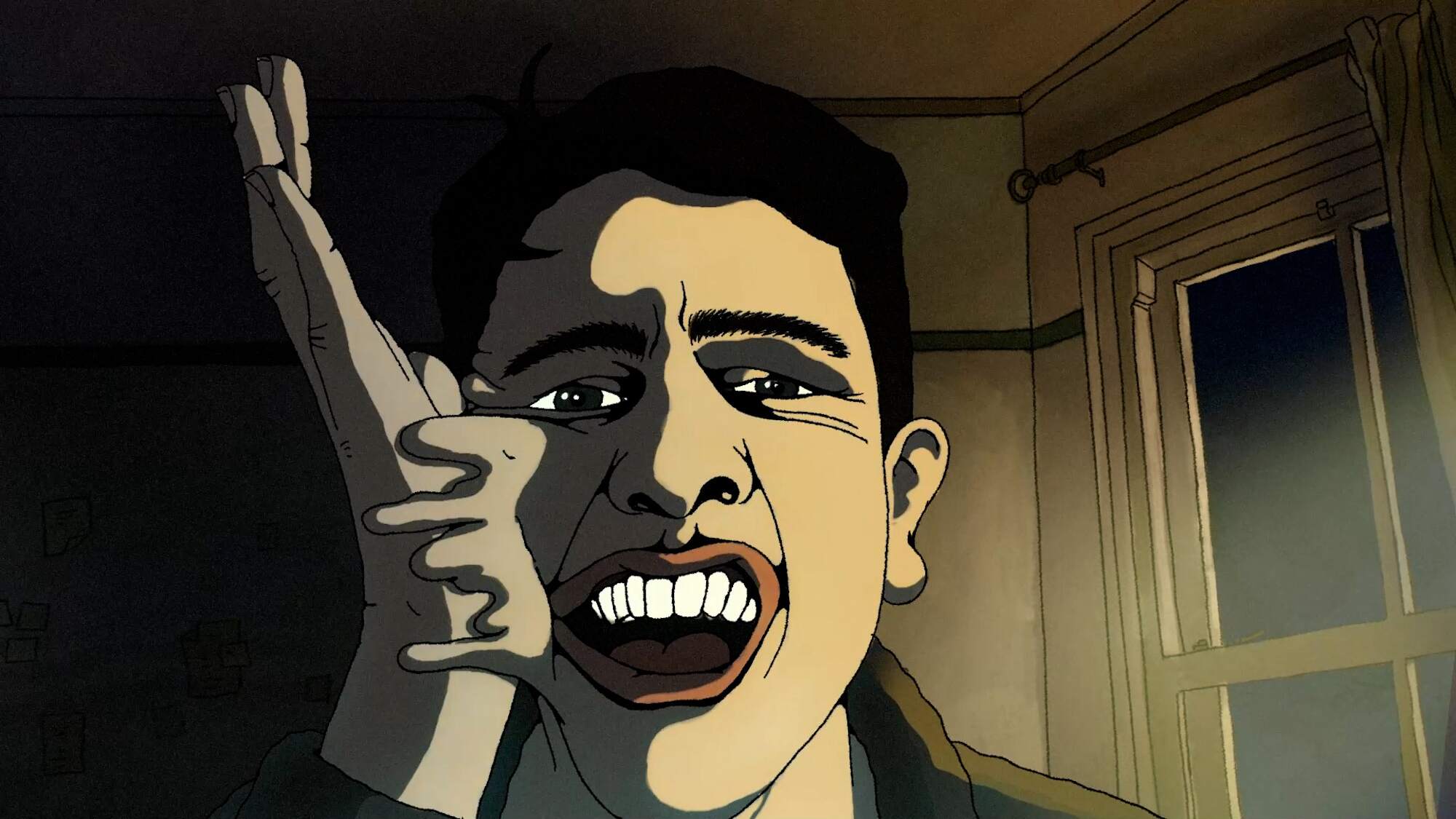 After a near ten year hiatus from filmmaking Director Joseph Pierce returns with his BIFA nominated short Scale, a film that we at DN have loved so much it’s featured in not one but two of our Best of Fest articles this year. A rotoscoped short that adapts Will Self’s novella about a man unpicking the sequence of events the have led to his crippling addiction, Pierce melds his fluid style of filmmaking with the reality-bending narrative of the book. It’s a brilliant short that could only be achieved through the creativity afforded by the hybrid technique, showcasing how the lengthy yet rewarding process of rotoscoping is able to take the honesty of live action performance and combine it with the endless potential of animation. DN caught up with Pierce, for the first time since speaking to him for our TheyAreAnimators series, in the run up to the British Independent Film Awards ceremony on December 4th to discuss his journey into filmmaking, the marriage of Self’s novella and his signature brand of storytelling, and the next logical steps for his career.

It’s been a little while since we spoke to you as part of our TheyAreAnimators series, could you take us back to the start and remind us of your journey into filmmaking?

Well I fell in love with cinema as a teen, frequenting the glitzy Ipswich Film Theatre, a real diamond in the provincial Suffolk rough, watching everything from Jacques Tati to 70s Hollywood crime and early Lars Von Trier. I also dabbled in acting, in fact a collection of us Aneil Karia, Jack Laskey and Mark Grimmer, who have all carved enviously successful careers, would mess around making our own films. I quickly realised I was almost certainly too repressed to act, but I continued to adore performance-led directors such as Spike Lee, Lynne Ramsay or collectives like the Dogme 95 movement. I also spent my time flunking high school art by wasting hours creating latex casts and plaster models of my arms and feet, so I guess animation was written on the walls early on.

Whilst studying experimental film at University I discovered the works of Czech genius Jan Svankmajer. I was enamoured by the sense of rhythm and timing, which to me are still the two fundamentals of animation, so I tried my hand at stop frame animation. I was hooked by the solitary process and surprising results, even more so when overexposing my stock on a 35mm Bolex.

I thought this would be the ideal marriage of story and technique.

I pursued stop-frame for several more years before applying to the RCA Animation course. I finally had my application rejected because my work wasn’t original enough, which led to much soul searching and having one last shot by applying to the NFTS Animation Direction course. This time I experimented with a rather primitive idea of tracing over actors (usually myself) and exaggerating some features. This is where I discovered the rotoscoped morphing technique I still use today.

After three animated shorts, a few mini shorts, a handful of music videos, a rather chastening experience in live-action filmmaking, two children, a number of ‘normal’ jobs and plenty of freelancing, I returned to the animation scene with an ambitious new short called Scale.

And what was the beginning of Scale as a project?

I first read Will Self’s novella as a teenager, and the image of a drug addicted writer covered in the road network of the UK really stuck with me. The story had cropped up a couple of times in the subsequent years, but it wasn’t until I met my producer Helene Mitjavile at a film festival in 2016 that it occurred to me that this could be the ideal story to tell in a more ambitious short, or a final short before a feature. I knew with Helene’s help I could access a network of studios and funding in Europe where my films have historically done well, so we hatched a plan.

What is it about rotoscoping as a technique that you felt matched with the story found in Will Self’s novella?

I’ve always thought of my form of rotoscoping as acting like an ‘internal dialogue’, where the animation often betrays what the character says and exposes their inner workings. As Scale deals with a character who’s struggling with addiction and trying to remember his past, I thought this would be the ideal marriage of story and technique. I’ve skirted around issues of mental health and addiction before, but here I tackle it front on. I wanted to create an honest and frank portrayal of addiction but rather than the typical ‘kitchen sink’ realism I wanted something hallucinatory and surreal. The concept of losing one’s sense of scale seems only achievable through animation.

The book is a very literary one, Self plays with the word scale in all its forms; scale as a measurement, scales of a lizard, bathroom scales, limescale. So one of the fun challenges was how we visually play with the idea of scale and perspective. We drew inspiration from a wide range of sources including Alice in Wonderland, Godzilla, Gulliver’s Travels, Willy Wonka and the real model village Bekonscot.

How long from start to finish did it take to make Scale?

Five years, but this was whilst having a nine to five job, some semblance of a social life and raising two children, who also appear in the film!

You mentioned back in our TheyAreAnimators interview that you use the live-action footage as a security blanket so that the animation can veer off on tangents. Does that still ring true? Could you walk us through your updated pre-production process? Do you still storyboard and draw out the film visually?

There was a lengthy visual and script development period whilst we were raising the funds. I’m not always the most disciplined storyboarder but because our production on both the live-action shoot and animation process was far larger, I was more rigorous. So I storyboarded loosely before the shoot and worked closely with the brilliant Cinematographer Venessa Whyte in testing out angles and lens. After a four day location shoot we edited the film together, which always looks very odd and awkward. I then began to key frame each of the 157 shots, which involved about 800 drawings. These were used as the basis for the animation, which were laid out on TV Paint and handed over to the animators. The shots were then coloured and a shadow layer added before it went to the background team who used multiplane, 2.5D tracking and full 3D to render the full colour environments.

I’ve always thought of my form of rotoscoping as acting like an ‘internal dialogue’, where the animation often betrays what the character says and exposes their inner workings.

As we knew we wanted to have a team to animate this, previously I’ve done every frame myself, the biggest challenge was how to ‘outsource’ my style. This involved writing a lengthy artbook and a great deal of back and forth with animators to unlearn what they knew and follow my rather unorthodox drawing style. Luckily we found a handful of exceptionally talented animators who far surpassed my expectations and indeed my own skill level!

You’ve worked across both live action and animation, have you found there to be benefits to your filmmaking of having experience in both forms?

All my films have a strong live action element, it’s almost like making the films twice. I really enjoy the collaborative process of the shoot and work with the same cinematographer, editor and sound designer on most of my films. The performances are also key so finding the right actors who are up for an unusual project is crucial. The brilliant Sam Spruell who plays the lead in Scale had to spend a lot of time in a cold house, with the windows and doors open as it was COVID times, in his pants, in imaginary scenarios, so I really needed him on board! For someone who’s been in Hollywood movies he couldn’t have been nicer or more open minded.

I’m really pleased to have experienced ‘straight’ live action filmmaking with my short The Baby Shower and discovered a newfound appreciation for live action filmmakers. I think it’s incredibly hard to make an interesting short without the tools of animation at your disposal. But then again most animators are control freaks.

Where would you like to go next as a filmmaker?

I’ve accepted at this stage in my career that my heart is with animation. It’s such an amazing international community and after a near ten year hiatus it’s been a pleasure to meet so many brilliant animators and artists on the festival circuit. My next logical step is to develop a feature, something I’ve only been sure of after completing Scale. We’ve stressed tested a larger production model and it didn’t break!

Is there anything you can tease us with about the feature?

We were lucky enough to premiere the film at Critics week in Cannes and one of the major bonuses is a development scheme called ‘Next Step’ which supports you in workshopping a feature idea. This motivated me to get my arse in gear, so I’m currently working on the treatment and script. Without saying too much, it’s another adaptation, a dark, surreal story exploring such tiny themes as death and the afterlife. Watch this space!