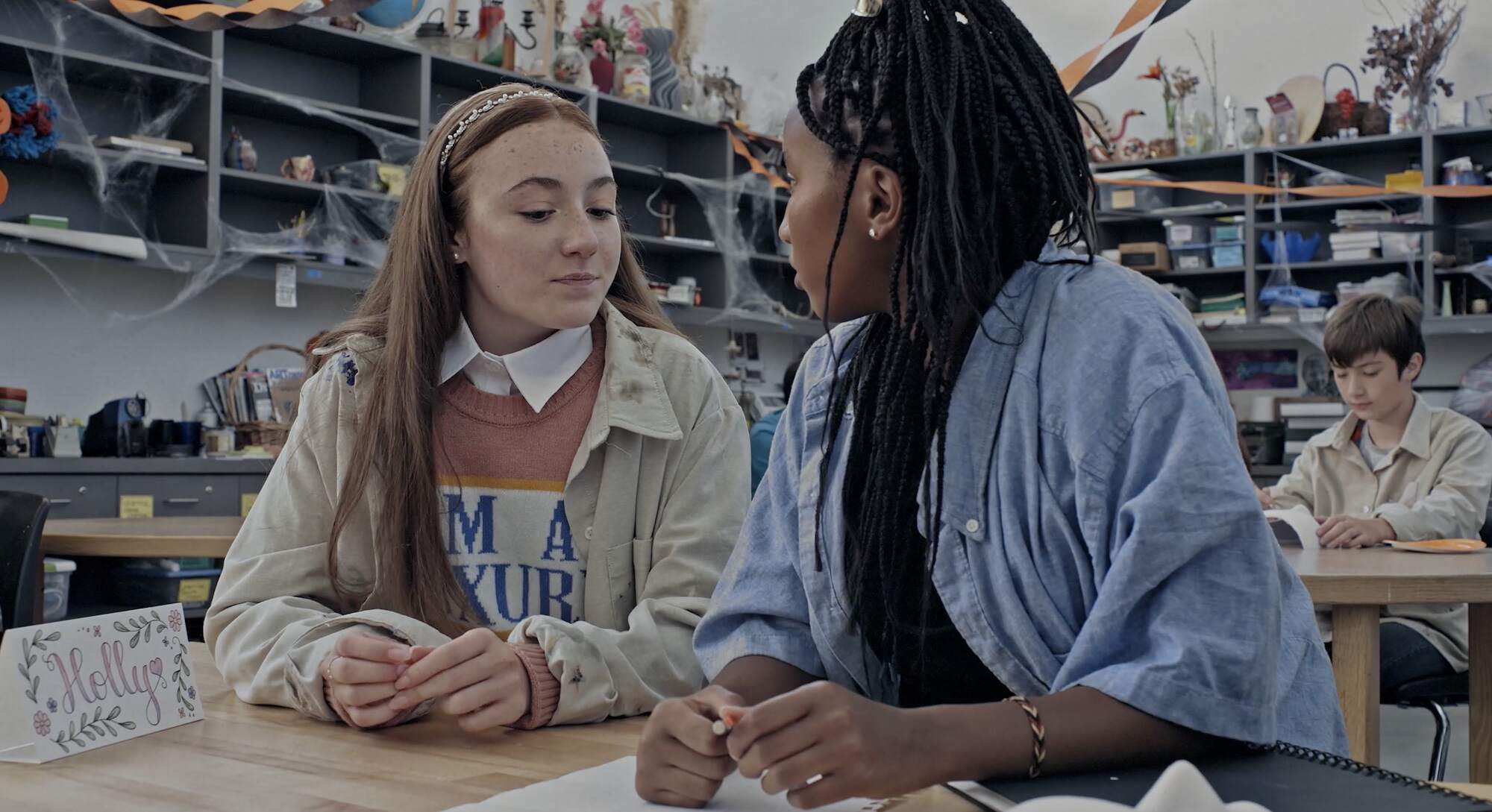 Based on a singular childhood event from the sixth grade, Chinwe Okorie’s short drama Elephant! tells the story of Amara, a young black girl who befriends a wealthy student at her school. But when Amara learns that her friend is poetically suicidal, a tale of privilege, mental health and identity ensues. Whilst Okorie’s story is specific in its recollection, it asks universal questions about how our place in society affects how others see us and how we can look to tackle issues of mental health in acknowledging and supportive ways. It’s a film brought together by beautiful performances from actors young and old and uses the format of a quiet drama to get into some thorny, thought-provoking questions. DN is excited to present the premiere of Elephant! online and caught up with Okorie below for a discussion on how she mined the past in order to ask questions of the present.

I read that Elephant! was based on an early memory of yours, what was it about that memory that prompted you to make a film from it?

The film is based on a childhood event which I had forgotten about until I was at an improv class and was prompted to share a memory from sixth grade. There was a story that immediately came to mind, but I was mortified to share it. I stood in front of my class and shared a moment when I interjected during a roll call saying that the absent classmate will not be in school because she killed herself. I had delivered the bombshell with a cavalier attitude which prompted more questions than my 11-year-old self was prepared to answer.

It was then I realized that the story was quite comedic in a dark, absurd way.

The day prior to the incident, the absent student and I were walking to our buses and she mentioned she was having a bad day and said she wanted to kill herself. It was a dramatic, empty gesture, but the adults, as they should, took the matter very seriously. Then when the student showed up later that day, we were sent to the principal office to get to the bottom of the suicidal declaration. The student denied ever saying what she told me which made the situation even more awkward. The adults expected me to apologize for lying but I wouldn’t because what I repeated wasn’t untrue. As I was telling the story to my improv class I noticed them stifling laughter and I could hear awkward chuckles. It was then I realized that the story was quite comedic in a dark, absurd way. I raced home and restructured the story to frame it around mental health and how uncomfortable people are with addressing it.

Do you see some of yourself in your protagonist Amara?

I have a lot in common with Amara: we both moved from Baltimore to a predominantly white area mine being York, PA. I also tried to adopt a new name at my new school, Bethany, but I wasn’t successful at getting anyone on board.

How did you technically achieve the film? Both with your camerawork but also working around the schedules of younger actors?

We shot the film on an Arri Alexa with Zeiss Jenas lenses over a four day production schedule. Because we worked with child actors, we adhered to an eight hour shooting schedule which greatly influenced our shot selections. I took inspiration from Yorgos Lanthimos’ directing style by reducing coverage and setting most scenes in a wide.

How did you find the experience of working with younger actors? Did they take to the script in the way that you’d hoped?

We had a table read right before the pandemic and Chloe Van De Graaf who plays Holly was invited to read. Once I saw her as Holly, I knew I was onto something and I had to act fast. She understood the dark comedy, she understood the drama, and she understood how to play with the actors using her eyes. There is a lot of depth to her, and I knew we were on the right track with the character of Holly by the way Chloe could so easily bring her to life. Ava Dallesandro who plays Amara was the last to audition and before seeing her tape I was getting really nervous because I wasn’t hearing the dry wit and awkwardness that was on the page. Ava was a breath of fresh air because she was confident and had a tenderness about her, but most of all she knew how to be still and listen to what is said around her. 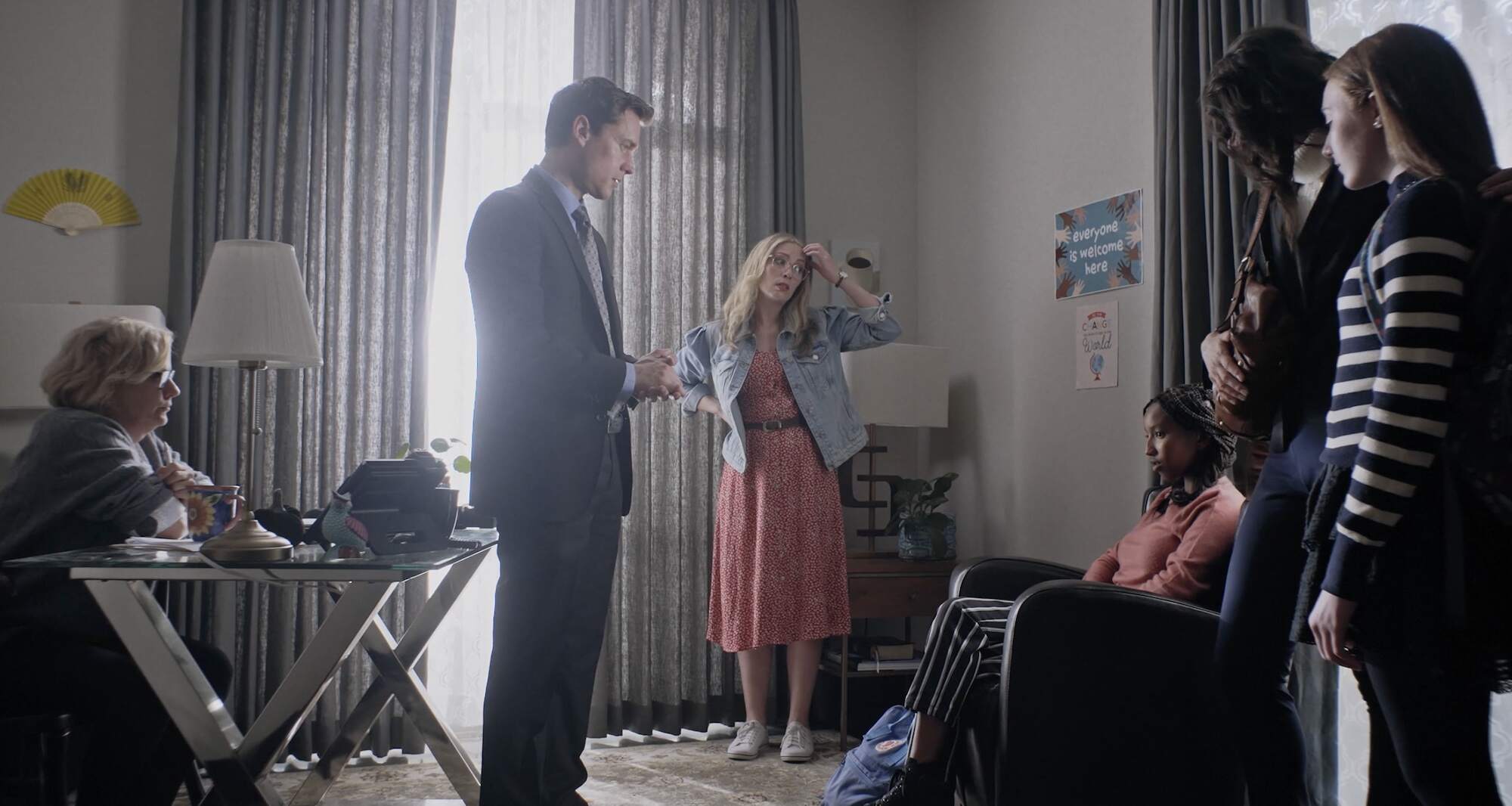 So much of the dry, witted humor found in the film comes from my cadence and delivery. I think the actors struggled a bit in understanding what a deadpan performance looked like, we certainly had to work towards that but I gave them free rein to bring their own experience to these characters (they were closer in age to the characters than I was). By the time they were on set, they were really prepared and all the actors blew my mind!

I took inspiration from Yorgos Lanthimos’ directing style by reducing coverage and setting most scenes in a wide.

Did you storyboard at all? The shots are all wonderfully framed and executed. What went into the planning of them?

Thank you! I storyboard by using reference photos and shot decks but it was actually hard to communicate through them because I couldn’t find images that replicated the ideas I had in my head. Especially the shot where we boom down to the back of Holly’s head as Amara finds a seat! I basically had to act it out with my DP, Blake Nelson, so that he understood what I wanted. The toughest scene was the bathroom. I knew I wanted one uninterrupted take, but I wanted to use a Steadicam to capture the unease and power dynamic… but it wasn’t something I could afford and the space was really small anyways. Once I let Blake know what my ideal blocking was, he told me we should go all in one on the long, uninterrupted push in since we did that for the principal scene. The idea was to set Amara as the ‘elephant’ in the room, keeping her at a distance from the other girls who are ignoring her until she couldn’t be ignored any more.

Elephant!, I think, marks your fourth short film, how would you say your style as a director has evolved over the course of making shorts?

I’ve definitely grown in my role as a director where my eye for detail is very specific even if it’s just a treat to me, but I want to reward repeat viewing. The use of color is paramount to how I tell stories from how it plays behind a character, to the overall look of the film and what the characters wear. I tend to have lingering shots and emphasize awkward silence, which I personally think accurately represents human interaction. So the more I make films, the more I lean towards grounded relationships. Also, I learned that I need rehearsal time with my actors because I found that it helps bridge the gap between what I see on the page and what the actors see on the page.

How would you describe the filmmaking scene in Austin at present? Do you see yourself continuing to work there?

Ideally, I would love to find success while living in Austin… but if I am being real, there isn’t a solid foundation for indie filmmakers to thrive here or sharpen their tools. We could really benefit from incubators, mentorship programs, grants, tax incentives, etc. But alas, if you want to get anything done you just have to figure it out on your own. I do think we have strong filmmakers who have a unique POV and I hope each and everyone one of them finds success.

Can you tease us with anything else you’re working on in the near future?

While I work on getting to the feature length version of Elephant!, I am developing a short film titled Cycles. The film is about grief and about a woman’s struggle with folding a fitted sheet at a laundromat. I may have to do another crowdfund (yikes!) because I want to cast a named actress.