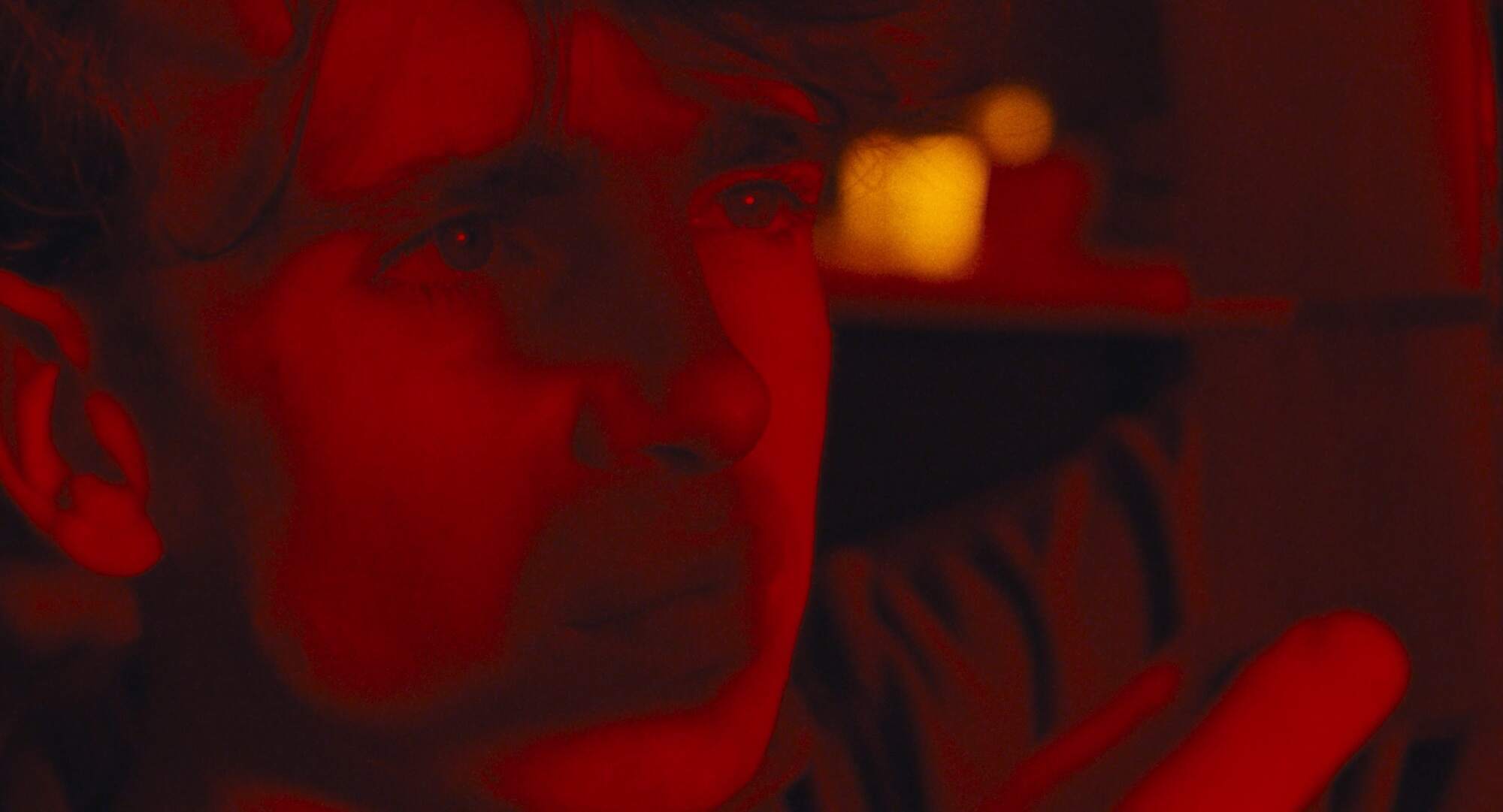 Made as her graduate film from the Directing Fiction MA at the National Film and Television School, Lisa Clarkson’s 45-minute short Muse is an 80s-set schoolroom drama about a bright, young photography student who gets pushed to the edge by his teacher’s seductive philosophies. Clarkson captures the unfolding of their tumultuous relationship through a gritty, filmic lens that mimics the art that they ponder. For me, it’s the film’s strongest element, how it melds form and story, doing what cinema is capable of doing and conveying a narrative through not just plot but through its fundamental tools. DN is delighted to Premiere Muse on our pages today alongside an in-depth conversation with Clarkson on the short’s philosophical themes, its stunning 16mm cinematography, and the challenge of creating during a time of uncertainty.

What was the impetus for Muse as a project?

Muse is our graduation film, the culmination of two years spent at The National Film and Television School. I was on the Directing Fiction MA. Our second year was in 2020! Yes, that year… there was a time when we wondered if we’d even get to make anything at all, but we held our nerve and it happened… I wrote the script at home in Scotland over lockdown, one of the few things lockdown was good for, and preparing with my outrageously talented heads of departments via zoom and phone calls for around six months. Then as soon as restrictions were lifted, in August 2020 we shot it over eight days in Amersham, Oxford and Birmingham, and a day in Beaconsfield.

The story started with a teacher/student relationship, the attraction to ideas, and the pain of rejection.

How did the tumultuous nature of the pandemic affect the flow of production?

When people ask me how we got on with Covid etc, I always say ask the brilliant Jack Pollington, our Producer, and Nia Campbell, our Production Manager! I suspect they hid a lot of the logistical puzzle it must have been from me; at that point no one really knew how to pull off shooting a film, or do anything involving more than two people safely… but we did, and with no shutdown or lockdowns, very fortunately. The school was fantastic, so supportive of getting the films over the line, doing everything they could to make it happen. Post had its moments, a few weeks out here and there but again, the school did everything they could to enable us to get the films completed. 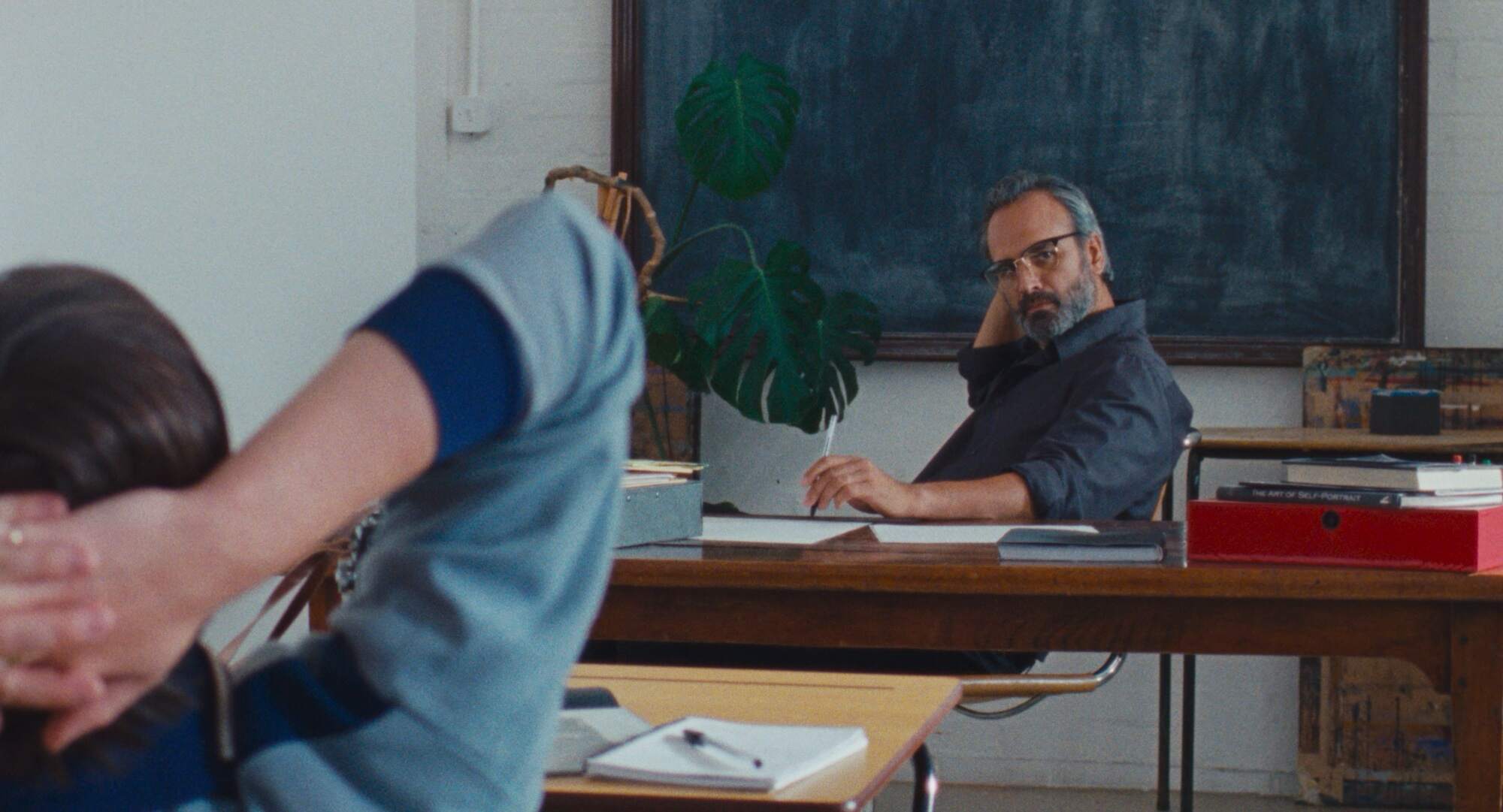 How long were you working on the film across that period of time?

All in all, it took around ten or eleven months to complete. It was first screened at BFI Southbank in May 2021, pretty much as soon as cinemas were allowed to be open again. The reaction to the film was intense! It was such a proud moment for us all. It was definitely all worth it in the end, as the very sweet Miss White says.

What inspired the core dynamic at the heart of the film between student and teacher?

As part of my English degree I studied philosophy, and one of my favourite texts was Plato’s Symposium. Sounds so highfalutin, yes?! Not just. It’s actually quite spicy, emotional and funny, as well as beautifully written. Mary is actually reading The Ladder of Love in the classroom, albeit to a bored audience. One of the key threads in Symposium is being attracted to the beauty of ideas, beyond physical attraction. Plato dramatises this through two characters in Socrates and Alcibiades. The younger beautiful man falls for the famously wise older teacher, seduced by his supreme intellect and ideas. Alcibiades drunkenly declares his love for Socrates; Socrates plays with him, and then rejects him. I love it. So the story started with a teacher/student relationship, the attraction to ideas, and the pain of rejection. I also love artists. I love their oddity, and the way they see the world. They are perfect dramatic characters and I tried to unpick why I love the ones I love.

Were there any specific artists you drew from when researching for Muse?

I looked at some of my favourite artists, Bacon, Emin, Magritte, noticing they all had interesting beginnings and despite difficult lives, they are exceptional artists, making the greatest of art… or, is it actually because of their trauma, not in spite of…?! Anyone can be a good artist and produce good work, but there is something about the greatest artworks which seem to be tied up with trauma…? Not that it’s a prerequisite of course. But there is undoubtedly a connection or correlation between this; my teacher goes further, arguing that it’s the essence of greatness… and so his philosophy was born, and every good film needs a philosophy amirite? Be it explicit or implicit.

For a film about looking, seeing and watching the world through an artist’s eyes, it had to be all about the eyes; capturing the light and fire burning inside these characters.

The three vital ingredients for the greatest art: truth, talent and trauma. A true artist must face up to their trauma, and pour it into their work. So says Lindsay. I shall leave it to the audience to debate if he’s right or not. George’s story is a bit like mine in many ways, although I haven’t had affairs with any of my teachers. Therefore I think Lindsay would give me a pat on the back, or head. Who knows where he’d pat.

Were there any photos or images that were particularly inspiring when it came to developing the photographic approach of your characters in Muse?

While I was working on the script, we did relentless research: watching films, docs, reading articles, sharing images, so many images. John Myers, Tom Wood, William Eggleston, Bruce Gilden, Rob Bremner, and I especially love the work (and story) of Tish Murtha. Tish’s daughter Ella very kindly let us feature her Mam’s beautiful photographs in the film; in the opening montage, the iconic Cardsharps has pride of place on George’s bedsit wall. 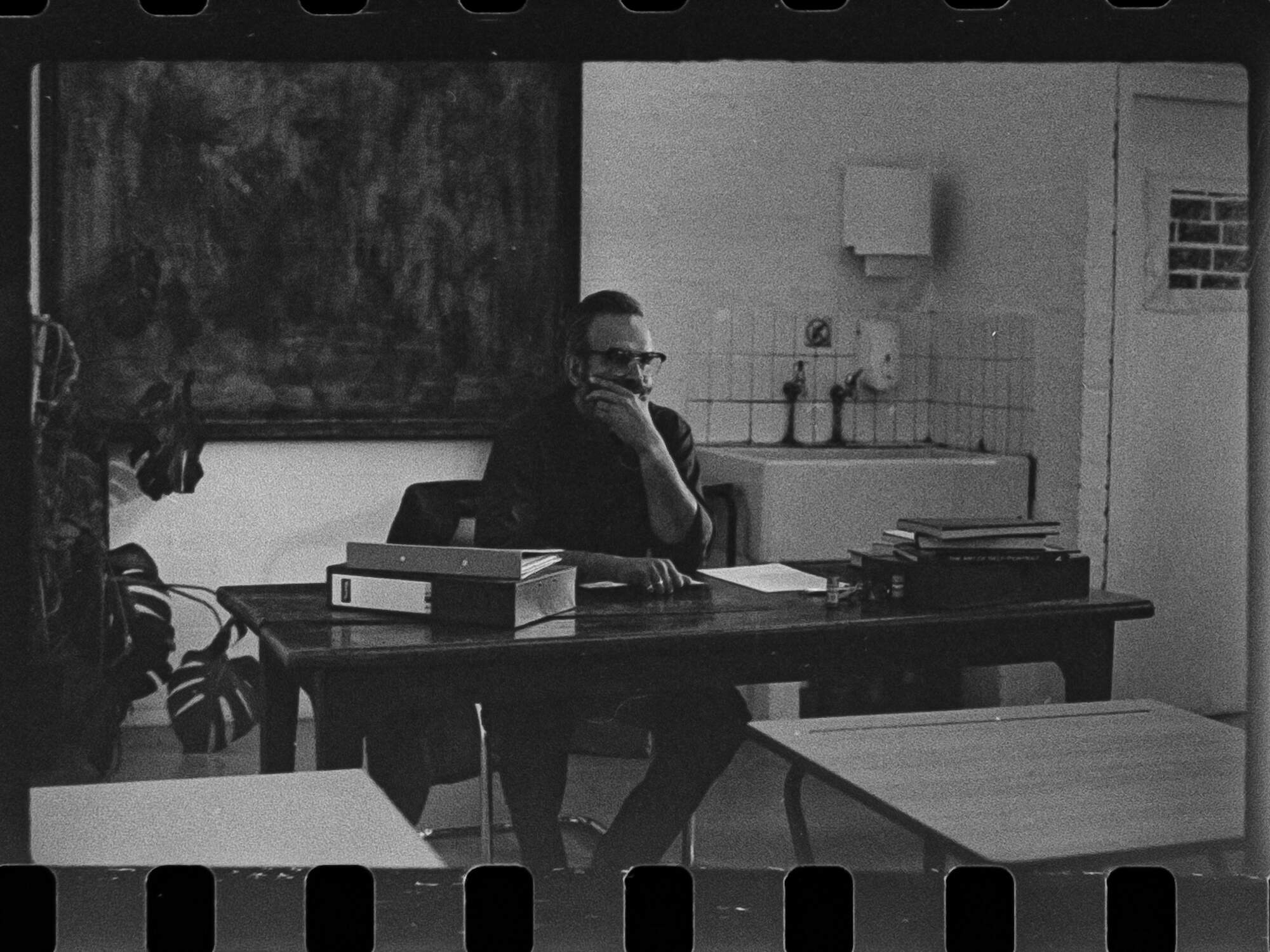 The grit of the film stock adds another layer to the story. Given that there’s a timelessness to your core themes, were you always intending to shoot on film to reflect that?

For a period film about photography, it felt so right to shoot it on film. We pitched our case to shoot it on film and were generously allowed to do so… what a dream! Shooting on Kodak Super 16 has spoiled me forever! The sparkle on the end rolls, the richness of colour, reds especially, the driving colour throughout and almost always present in every frame, the soft and tactile look of 16; I adore it. Another challenge for everyone involved in the shoot, but absolutely worth it.

Charlie and I wanted each frame to look photographic; pause it and you have a photograph. We particularly favoured lots of landscape or what we called ‘flat’ shots and ECUs of the cast’s beautiful faces. For a film about looking, seeing and watching the world through an artist’s eyes, it had to be all about the eyes; capturing the light and fire burning inside these characters. There are quite a few nods to my beloved Trainspotting in the film, see if you can spot them.

For a period film about photography, it felt so right to shoot it on film.

Odd question but I wanted to ask about the length of the film, which is a fair amount longer than your average student project. It speaks to the impressive amount of creativity the NFTS affords its students but obviously, it also makes a production that bit more challenging to manifest. How did you find creating something that long given how intensive it would be as a production?

We never intended to make a 45 minute short film, no way! The script was 29 pages long, so long, but not that long. It was scenes such as the one where George visits his mother at home which ended up being longer than they read on the page. There is no dialogue between George and his mother in that scene, but the clip which is playing on the television is three minutes long, which is from The Spongers, a BBC Play for Today, a masterpiece of television drama, I urge you to look it out! Search them all out in fact. Thanks to BBC Archive for permissions.

The film could have actually been longer! We cut quite a bit of dialogue from the classroom, lines and small moments which I still miss… But any longer than 45 minutes would have really been pushing it. Forty-five minutes is still pretty outrageous, a turn off for festivals, etc, but we all agreed that it’s exactly as long as it needs to be. All 44 minutes and 45 seconds of it. Thanks for watching our long short film! A featurette.

What is the future looking like for you, work-wise?

I’ve just come off a lovely TV shadowing job, now settling into writing two longer form films in development, and also pitching for another short film imminently! Set in 90s Glasgow, Paternal Advice is about yet more difficult men, I can’t get enough of them, so it seems. Wish me luck!